California has been at the vanguard of family change in America. Culturally and legally—from the Human Potential Movement to the passage of no-fault divorce under then-Gov. Ronald Reagan, from Hollywood movies and shows like “The Graduate” and “Friends”—the Golden State has played a central role in pioneering and representing the cultural attitudes that have transformed marriage and family life across the nation. Indeed, because of Hollywood’s, and now Silicon Valley’s, outsized influence on the global stage, California has amplified values and virtues like expressive individualism, personal fulfillment, and tolerance across the world.

These liberal values and virtues can be valuable in the public square, yet they often stand in tension with stable, married family life. In fact, scholars have found that the spread of these more individualistic values since the 1960s has been strongly linked to more cohabitation, less marriage, more divorce, and greater family instability.

It is striking, then, that a new Institute for Family Studies (IFS) report finds that California—despite being a global force for cultural liberalism—actually has a higher share of stable, married families than the nation as a whole. About 67% of California parents are in intact marriages, compared to 63% of American parents, according to an IFS analysis of the Census data. Likewise, 65% of children ages 0-17 in California reside with their married, biological parents, compared to 62% of children in the United States. In other words, family life in the Golden State is more stable than in the country as a whole. 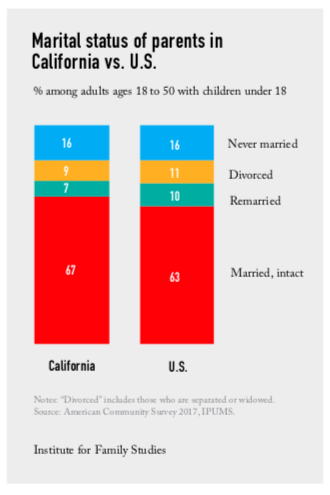 This IFS report tries to unravel the contradiction between California’s progressive family culture on the one hand and the conventional family choices of its residents on the other by delving more deeply into the demographics of the Golden State. What do education, immigration, ethnicity, and culture in California tell us about why, taken as a whole, the state appears to talk left but live right?

One factor that looms large in the state’s family story is California’s exceptionally diverse immigrant population. Immigrant families are more likely than native-born families to be intact; this is true for Asians above all. Compared with U.S. parents overall, California parents with children under age 18 are more likely to be Hispanic or Asian, and less likely to be white. The largest ethnic group in California is Hispanic, making up 46% of all parents ages 18 to 50. About 15% of parents in California are Asian, twice as many as the share among U.S. parents (7%). Only about 3 in 10 parents in California are white, compared with 57% in the nation.

Meanwhile, California is home to the largest immigrant population in the United States. More than 40% of Californians with children under age 18 are foreign born (43%), almost double the share in the country (23%).

Given that immigrant families, as well as Asian families, are more likely than other families to be intact, the larger presence of these demographic groups may help account for the higher stability among California families.

Also helping to explain the apparent contradiction between California’s progressive values and its relatively traditional families is the difference between the public beliefs and personal aspirations of its college-educated population. Nationwide, the share of college-educated couples in intact families is considerably higher than for those without a college degree. That’s also the case in California. Marriage levels for college-educated parents are about 20 percentage points higher than for their less-educated peers. Yet, rhetorically, college-educated elites embrace progressive family values whole-heartedly, while they take a more marriage-minded approach in private, according to our new California Family Survey of men and women ages 18 to 50 fielded by YouGov. When we ask Californians about family diversity (in terms of kids growing up in different kinds of families today), college-educated Californians (including parents) are the most likely to agree that it should be celebrated. However, in private, this same group of Californians is also the most likely to say that it is very important for them personally to be married before having children. And the share of parents in intact marriages (80%) is also markedly higher for college-educated elites than for Californians without a college degree (61%).