Social Media Use, Depression, and Self-Harm Among Youth

by Timothy Oblad, @timoblad
Back to Blog

In 2016, Natalie Natividad was an 8th grader at Hebbronville Middle in South Texas. After repeated bullying at school and online over the course of a year, she tragically took her own life. This was especially impactful to the local community as they were just recovering from the news of a nearby high school student who also made a similar suicide attempt because of depression from bullying (although this young woman survived). Cases such as these are difficult to face, but the growing number of individuals struggling with depression and bullying from peers is leading to increased amounts of attempted suicides and suicidal ideation, levels of which have never been reported. In 2017 alone, there were over 100 suicides reported in the South Texas region.1

Unfortunately, social media is often used by bullies to facilitate hurtful attacks and can be sent or shared repeatedly, causing embarrassment, hurt, and real pain for victims. This issue is particularly alarming due to the constant connection teenagers maintain with their electronic devices. Nearly 24/7 accessibility may increase risks of bullying, and researchers have indeed found an overwhelmingly amount of teens (especially those ages 13 to 15) are struggling to cope, leading some to become delinquent,2 while others develop severe anxiety,3 psychological problems, or depression,4 and others struggle with guilt.5 Even college students who experience online bullying report struggling to focus on schoolwork, declining self-esteem, and trouble making it to classes.6

It is important to note that not all bullying victims internalize maltreatment with negative coping methods. Veronica Sleglova and Alena Cerna reported in CyberPsychology7 that some victims of bullying are indeed able to recognize supportive resources and to trivialize hurtful messages intended to cause harm or pain. Most importantly, these victims shared that they could confide in others, receive reassurance of themselves, and avoid feelings of guilt or depression. Stacey Bradbury likewise explored various positive coping strategies in her dissertation8 and reportedly discovered much higher efficacy among those who reported having social support and (or) problem-solving skills, compared to those with fewer supportive peers. Thus, finding a support system serves as a protective buffer from depression and more importantly, suicidal ideation.

Several researchers have found that increased use and exposure to social media platforms often predicts an increased rate of negative outcomes, such as unsolicited invitations or bullying.9 Although there is also support for positive outcomes (e.g., increased social capital) as discussed, there are growing concerns about increased rates of depression and other internalized negative factors, including suicidal ideation and self-harm. In our recent pilot study,10 we surveyed 130 high school students on such experiences. All participants were between ages 14 and 18 and primarily Hispanic (80%).

Through preliminary exploration, we created a 2 x 2 table with sex (male/female) and dummy coded scale of cybervictimization (e.g., bullied via texts, Facebook) into “never/one-time only” or multiple occasions. We found that 33% of the total sample reported receiving multiple cybervictimization attacks via texting, social media, or Social Networking Sites (SNSs). While we did not find a significant association between sex and cybervictimization, among the 33% of self-reported cyber-victims, over half were female (54%). Altogether, this sample found 1 in 3 students (32.5%) are targeted and have received unwanted aggressive messages more frequently than many other peers across the country.11 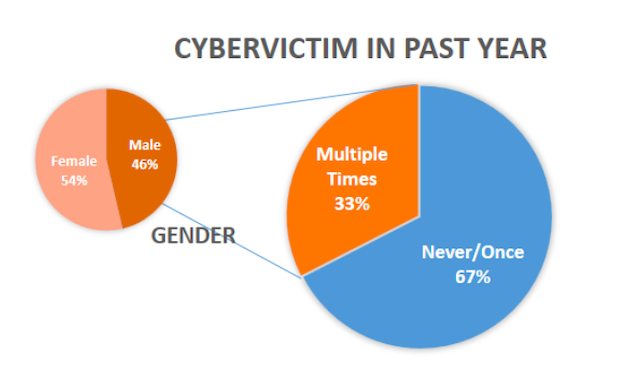 Student-participants were surveyed using a single item: “Have you ever closed your SNS account after/because of being bullied, targeted, unwanted attention, or harassment?” We found that 54% of cybervictims did, in fact, close down one (or more) SNSs (see Figure 2 below). This could support the notion as a means of positive coping methods by students today. By removing access from those targeted on certain SNSs, bullies may lose the ability to access their targets. Further, it is interesting that 11% of non-cybervictims also closed down their SNS within the past year. It is possible they did not consider themselves victims, or witnessed others experiencing bullying, or wanted to avoid risks associated with SNSs, or simply discontinued their personal account(s) for other reasons. 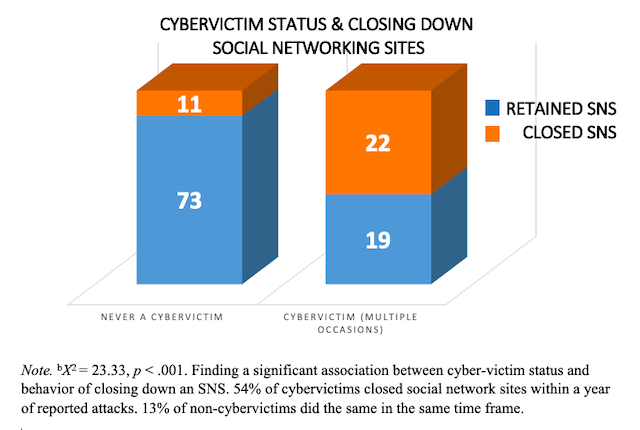 To determine whether or not increased amounts of time spent on social media significantly predicted participants’ ratings of depression, a multiple regression was used (it included sex, age, and cybervictimization). Results of the regression indicated that the predictors explained 28% of the variance. Cyber-victimization and time spent online made the strongest significant contributions to explaining depression. While these findings may make sense, increased time spent on SNSs may lead to more incidents of targeting and thus increased risk of negative coping methods being used by teens.

When exploring interactions with social media and how students respond from them, it is important to understand there are tangible consequences. And not all adolescent students are able to cope positively. While closing down SNS as a response (at least temporarily) is one method, too many students are turning to self-harm and not pursuing healthy coping methods. We explored suicidal ideation (using a scale of questions exploring thoughts about hurting oneself) and suicide action (e.g., actual attempt, made a plan for suicide) through independent-samples-t-tests and a hierarchical multiple regression (see Table 2 in the Appendix for details on this test).

To provide further insight in understanding self-harm and mechanisms that may contribute towards the behavior, including comparison by gender, we also conducted a hierarchical multiple regression to pinpoint what predictors lead to self-harm (after controlling for the influence of sex, age, and parental care). Overall, when all variables were tested together, the presence of cybervictimization and depression were the only significant predictors of self-harm (please see Table 2 in the Appendix). When split by gender, the final models revealed that cyber-victimization and suicidal ideation were significant predictors of self-harm among young men, while depression and suicidal ideation were the only significant predictors for young women.

The results of this pilot study indicate the serious risks of involvement in social networking sites and cyber-victimization, including suicidal ideation and self-harm. While the majority of students reported not being targeted, there were too many reporting in the affirmative, particularly girls. School administrators, coaches, parents, and educators alike will benefit from understanding the risks attached to social networking sites use and the potential negative coping methods, such as increased depression and suicidal thoughts, to which adolescents often turn. Reaching out to students earlier, promoting healthier social networking, and teaching positive coping skills may go a long way in preventing students from adverse risks related to social media use.

Timothy Oblad, Ph.D., is an assistant professor of Human Development and Family Studies at Texas A&M University-Kingsville. His area of research consists of cyberaggression and exploring its impact on targeted individuals.

Note. The suicidal ideation scale originally consisted of four items from Hinduja and Patchin12 exploring suicidal ideation among adolescents (e.g., “seriously thought about attempting suicide,” “made a specific plan about how you would attempt suicide”). For measuring self-harm, we used six Add Health items, including: “have you intentionally tried to hurt yourself,” “how often do you think about killing yourself/dying.” Alpha levels for both scales were Cronbach’s alpha was very high (α= .80 for ideation and Cronbach’s alpha was very high (α= .76 for self-harm).