Last Thursday, I joined Isabel Sawhill, Jeremy Pope, and Christopher Karpowitz for a panel discussion at AEI about the 2017 edition of the American Family Survey (AFS). The AFS, which is sponsored by the Deseret News and the Center for the Study of Elections and Democracy, covers a wide range of political and cultural issues that are important to American families—from the health of relationships to cell phone use. Three findings from the AFS jumped out at me:

1. More smartphones, more relationship trouble? With the publication of Jean Twenge’s iGen, a great deal of attention has been focused on the possibility that smartphones and social media are discouraging in-person relationships and fueling loneliness and depression among teens. New findings from the AFS suggest similar concerns may be warranted for adults. In particular, the survey indicates that adults who use smartphones for more than two hours a day are much more likely to report relationship trouble in the last two years, compared to those who use a phone less often. The figure below indicates that only 28% of adults who use a phone for less than an hour per day report relationship trouble, compared to about 40% of those men and women who use it two hours or more per day. I cannot be sure what the direction of causality is here, but the potential impact of the extensive use of smartphones and social media on the quality of relationships and marriages bears monitoring. 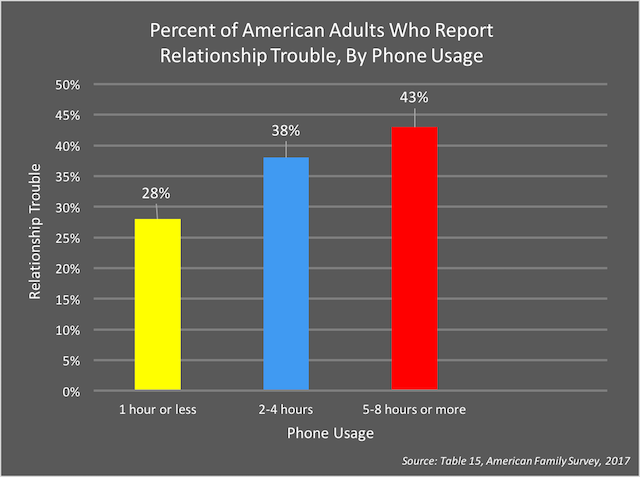 2. The “success sequence” and substance abuse. Sociology has long shown that people who are integrated into the nation’s core institutions of work and family are less likely to fall prey to drugs or alcohol. Not surprisingly, the American Family Survey finds that American adults who followed the “success sequence” (1. getting at least a high school degree, 2. holding down a full-time job, and then 3. getting married before having any children) are less likely to be addicted to drugs or alcohol. Specifically, as the figure below indicates, adults who didn’t follow all the steps of the sequence were almost three times as likely to be abusing alcohol or drugs (such as heroin or prescription painkillers) in 2017, compared to adults who followed the sequence. 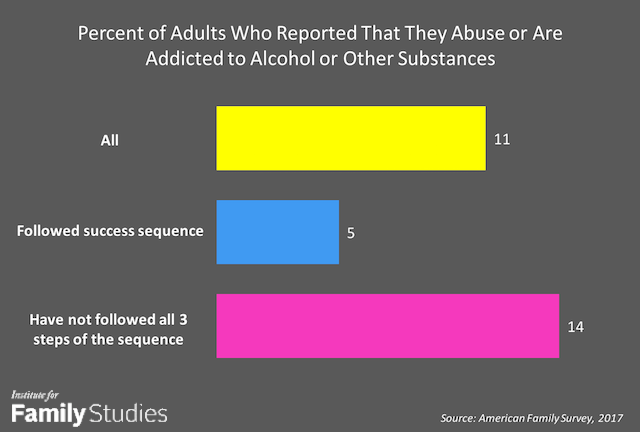 Note: Any addiction to alcohol, prescription painkillers, marijuana, heroin, cocaine, or other street drugs included.
For the success sequence, respondents' job and education status were measured at the time of their first marriage.

Again, the direction of causality is uncertain here: for some, substance use affects their education, work, and marriage. But it’s also likely that American adults who follow the success sequence are less likely to end up addicted to drugs or alcohol, given that being stably employed or married is protective against addiction. So, following the success sequence may not only protect American adults from falling into poverty, it also may protect them from succumbing to drug and alcohol abuse.

3. Americans are concerned about the rising costs of raising a family. Finally, the American Family Survey indicates that the most common economic concern related to family life for ordinary Americans in 2017 was “the costs associated with raising a family,” with 34% registering this concern. 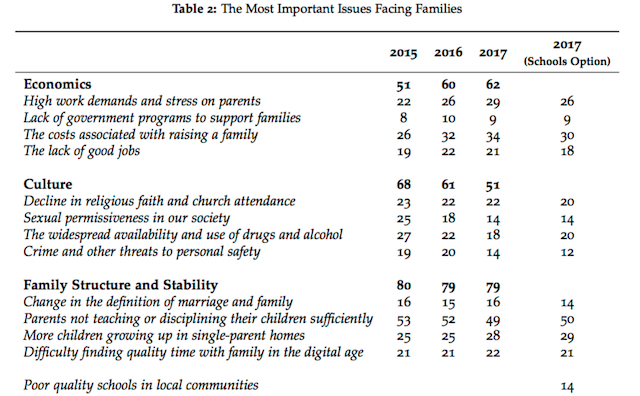 Unfortunately, the Republican tax bills now winding their way through Congress, which would boost the child tax credit to $1600 (in the House plan) or $2000 (in the Senate plan) per child, end up doing very little to help many lower-income families. Because the Republican plans do not extend the child credit to payroll taxes or make the expanded credit refundable, millions of poor and working-class families would gain nothing from these tax bills. In other words, when it comes to facing the rising “costs associated with raising a family,” millions of lower-income families would get no additional help from the child tax credits in these current legislative proposals. This, to put it bluntly, is a travesty.

W. Bradford Wilcox is director of the National Marriage Project at the University of Virginia and a senior fellow of the Institute for Family Studies. He serves as an advisor to the American Family Survey.