by David C. Geary Gijsbert Stoet
Back to Blog

A quick Google search of news articles on gender differences in STEM (science, technology, engineering, mathematics) yielded 95,000 hits, and a similar Google Scholar search of academic articles yielded more than two million. These patterns reflect an almost obsessive focus among many politicians and gender activists on the fact that there are more men than women in certain STEM fields, especially engineering, computer science, and information technology. These disparities are an obsession because they deviate from the ideological belief that there should be gender equality (equal outcomes) in all domains that are socially influential and important.

In some people’s minds, this utopian state is being thwarted by outside forces that are suppressing girls’ and women’s engagement with these areas of study and occupations. Some believe that one such force is “stereotype threat,” whereby socially derived negative stereotypes (e.g., regarding women and mathematics) undermine girls’ and women’s performance in these areas,1 but that notion has been rejected by different research groups due to methodological and statistical problems.2 A focus on such external forces allows people to maintain the belief that gender equality in socially valued domains is just around the corner, given sufficient interventions to change these forces. At the same time, such a focus robs girls and women of personal agency and fails to consider that the interests, motivations, and strengths of girls and boys may differ for reasons that are not due to stereotypes, socialization, implicit bias, sexism, or a host of other factors.

We recently completed a follow-up to our earlier study of gender-equality and sex differences in the pursuit of STEM degrees.5 Here, we analyzed the occupational aspirations of nearly half a million 15- and 16-year-olds across 80 developing and developed nations that participated in the 2018 Programme for International Student Assessment (PISA) of mathematics, science, and reading competencies. In this assessment, students were asked to answer the question, “What kind of job do you expect to have when you are about 30 years old?” which we termed occupational aspirations. PISA staff classified occupations using the International Standard Classification of Occupations.6 We then classified these as things-oriented, people-oriented, or other (i.e., neither clearly things- nor people-oriented), based on the well-documented sex differences in interest in things versus people.7

Things-oriented occupations are heavily focused on using or designing a tool or machinery. These include blue-collar and white-collar occupations, such as welding, civil engineering, or application programmer. People-oriented occupations are centered around interacting with clients, customers, or children. These include all teaching and instructor occupations as well as professions that involve helping patients (e.g., physician, nurse). Occupations that did not fit either of these categories, such as biologist, legislator, or accountant, were classified as "other." We also separately analyzed aspirations for entry into things-oriented STEM occupations (e.g., engineer). 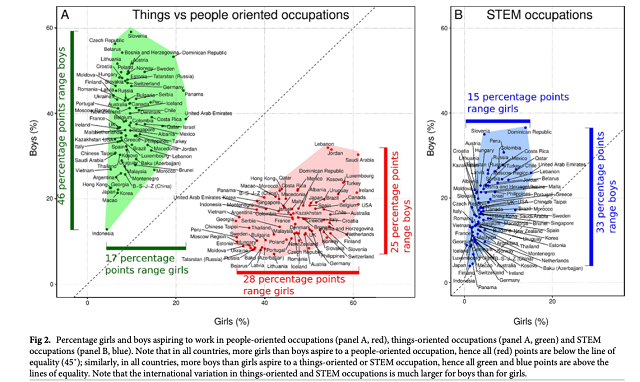 That said, we did find evidence for secular changes in girls’ occupational aspirations, especially girls from higher-income families. Adolescents from lower-income families had more sex-typical aspirations, often in blue-collar professions. Adolescents from higher-income families had more white-collar aspirations, including boys’ interest in things-oriented STEM fields. Many girls from these families were interested in professions that were neither things- nor people-oriented (e.g., accountant, manager). The latter findings are consistent with changes in women’s occupational choices from 1972 to 2010 in the U.S., where there was an increase in women working in professional occupations but there was not a shift to more engagement with blue-collar or white-collar things-oriented occupations.10

In all, there are sex differences in occupational aspirations and choices that are universal; they are found across generations and across nations. The consistency of this pattern suggests fundamental sex differences in the types of activities, including occupations, that are attractive to girls and women and boys and men.11 Nothing short of draconian social engineering will change these patterns to reach the utopian goal of gender equality in high-status male-typical occupations. Rather, social changes have resulted in more women entering professional occupations but not a shift toward interests in male-typical STEM (or blue-collar) occupations.

David C. Geary is a Curators’ Distinguished Professor in the Department of Psychological Sciences and Interdisciplinary Neuroscience at the University of Missouri. Gijsbert Stoet is Professor of Psychology at Essex University (UK).