Sex and the Single Evangelical

Evangelicals share something in common with every other branch of conservative Christianity. They hold to a simple view of sex outside of marriage, rooted in many centuries of historical teaching and what appear to be the plain teachings of the Bible, especially the New Testament—don’t.

Yet most self-identified Evangelicals1 engage in premarital sex. And doing so has become increasingly morally acceptable among them, regardless of what their churches teach. We have seen a long trend toward greater liberalization of sexual ethics among Evangelical laypersons over the past several decades, underscored in recent years by several prominent Evangelical leaders breaking ranks to embrace progressive views on sex.

The recent, highly public defection of a superstar of the “sexual purity” movement, Josh Harris, is a dramatic case in point. Starting with the repudiation of his own best-selling books promoting courtship practices that promoted abstinence until marriage, on to pursuing his own “amicable” divorce, and then rejecting Christianity entirely—all on social media—Harris has become a poster-child for the “new” Evangelical sexual ethic. Unique, perhaps, only in indicating that his views are no longer Christian (rather than the more typical attempt to claim that Christianity allows for pre-marital sex), Harris is indicative of a larger shift away from traditional stances on sex within Evangelical circles.

Meanwhile, the GSS shows that among never-married fundamentalist adults between 2008 and 2018, 86% of females and 82% of males had at least one opposite-sex sexual partner since age 18, while 57% and 65%, respectively, had three or more. These percentages were even higher for those under 30.

In my recent book, Christian Marriage: A Comprehensive Introduction, I looked at data from the National Survey of Family Growth (NSFG), which provides a lot more detail on sexual activity and includes a larger number of respondents.3 In this article, and in the corresponding research brief, I incorporate the most recent NSFG cycle released in December 2018 to further explore the sexual practices of young, never-married Evangelicals, combining the surveys for 2013-15 and 2015-17. I summarize my findings below.

As Figures 1 and 2 below show, by the time they are young adults, roughly two-thirds of Evangelical young people have engaged in sexual intercourse, and about three-quarters have engaged in at least one of three forms of sexual activity. Among those ages 15 to 17, those percentages were about one-quarter and well over 40%, respectively. 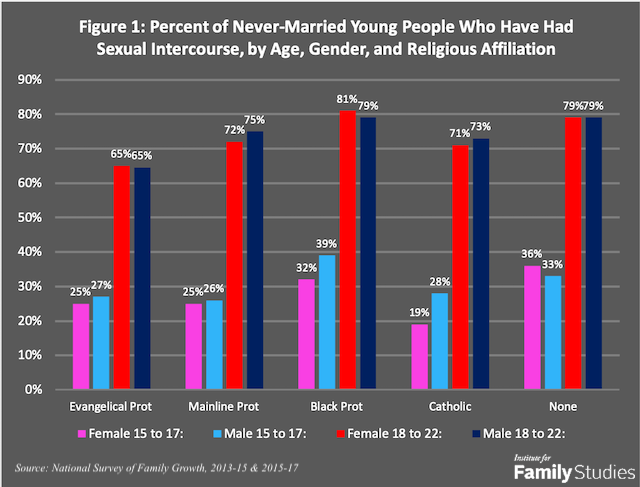 Although Evangelicals mostly compare favorably to respondents in the other religious groupings shown, the percentages are not very comforting to those Evangelicals who believe in premarital chastity. 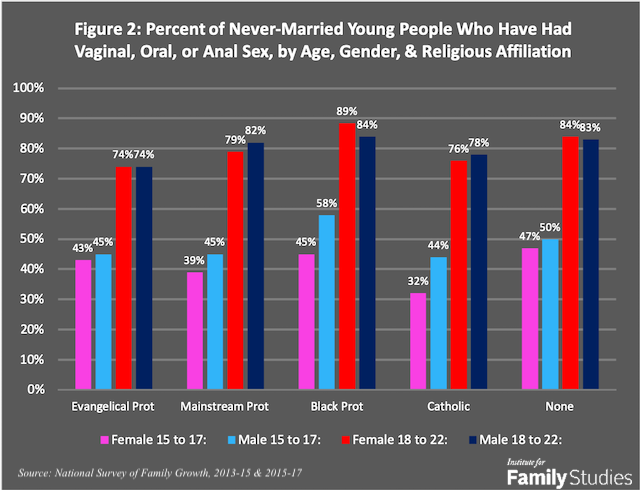 Moreover, as Figure 3 below illustrates, for those who have ever engaged in sexual activity, the percentages who have had multiple sex partners is quite high. Focusing just on Evangelicals, we find that roughly one-third of those ages 15 to 17, and over 40% of females and over 50% of males ages 18 to 22, have had 4 or more opposite-sex partners. Overall, these percentages were not consistently lower than those of the other four Christian groups. 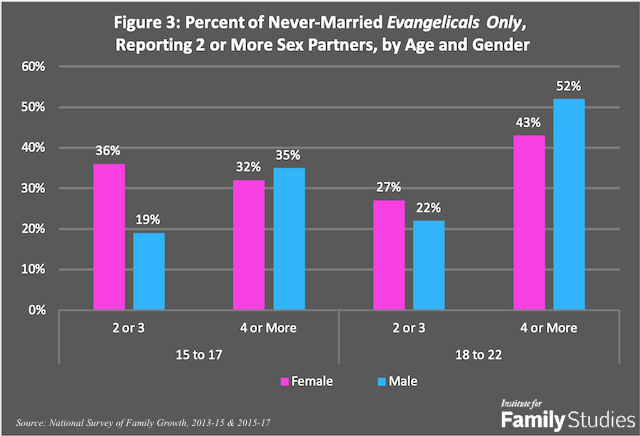 When those who had refrained from sexual intercourse were asked to identify their most important reason for abstaining, the response of Evangelical singles was not that encouraging, either. Among both age groups combined, 59% of young women said it was because they did not want to violate their religion or morals, but only 42% of young men cited this reason (figure not shown here). Other reasons were quite prominent, including simply not having the opportunity, or waiting for the right time, for premarital sex. Thus, even for many Evangelical abstainers, religious beliefs about premarital sex were not very relevant to their sexual behavior.

In further analysis (explored in the full research brief), it becomes clear that church attendance and the importance of religion to the respondents’ daily lives are both strongly associated with reduced involvement in premarital sexual activity. For example, looking at only Evangelicals ages 18 to 22, 51% of those who attended church weekly or more had engaged in sexual intercourse. Percentages for those who attended at least monthly and less than that were from 17% to 31% higher, and percentages for those who never attended church were even greater. 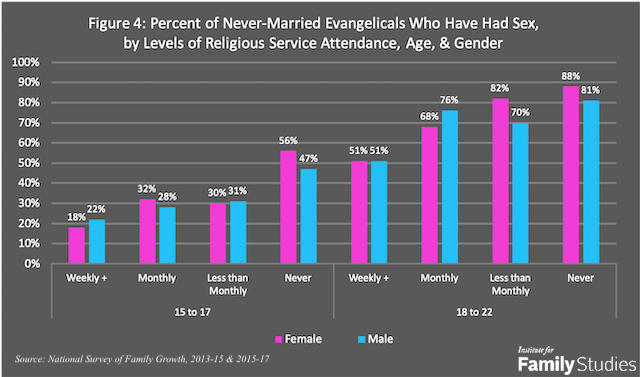 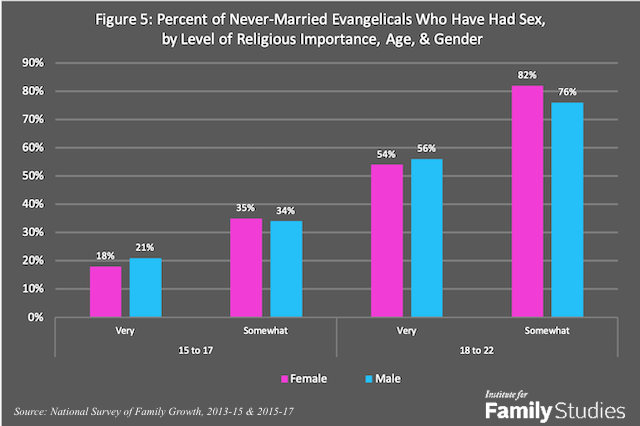 Unfortunately, for both age groups combined, only 55% of young women and 48% of young men attend religious services at least weekly, while 25% and 31% (respectively) do so less than monthly or never. Moreover, 70% of young women and 61% of young men consider their religion to be “very important” to their daily lives—majorities, but still not too impressive. This certainly helps explain why being Evangelical is, in itself, not as correlated with lower levels of premarital sexual activity as we might expect given the substance and importance of Evangelical teaching on this issue.

Although we must be careful about making any kind of causal claims from data such as this, given all we know about the impact of commitment and social support, teaching young people to prioritize church attendance and to keep religion central in their daily lives will most likely help them to be more faithful to their churches’ sexual teachings. It is certainly hard for religious leaders to effectively instruct their members on these matters if most are not present in church or committed to applying their faith. This is especially true in a culture where classical Christian teaching on sex is increasingly rejected. Casual, lax Christianity is not going to encourage young people to swim against the currents of their time and the influence of their peers.

1. By the term ‘Evangelical’ I am referring specifically to a definition consistent with the National Association of Evangelicals understanding of this term, and what denominations who are part of the NAE generally embrace. See full research brief for the complete definition.

2. Fundamentalist” and “conservative Protestant” in the GSS both match typical understandings of “Evangelical.”

4. There were few who identified with an Evangelical Protestant church who said their religious faith was “not at all” important to their daily life, hence that category was excluded.