by Laurie DeRose Anna Barren
Back to Blog

We were not surprised by their findings. We suggest there are two basic reasons people assume religious men refrain from household chores: the first is a caricature of religious men as misogynistic, narcissistic, and controlling; the second is that many people understand that egalitarianism places high expectations on husbands and fathers, without recognizing that faith does likewise.

Egalitarianism and faith both seemed to enhance relationship quality in the Global Faith and Gender Survey, the data used in The Ties That Bind: Is Faith a Global Force for Good or Ill in the Family?, a 2019 report from the Institute for Family Studies and the Wheatley Institution. The report found a "J-curve" for women's relationship quality in the United States, as shown in the figure below: 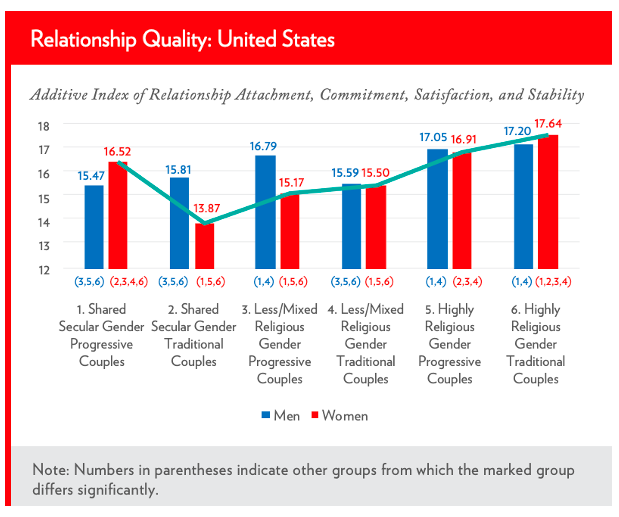 Gull and Geist's findings regarding housework similarly point to problems in the "mushy middle." They found that men who attended religious services monthly did less housework than men who never attended, plus that both sporadic and occasional attenders were less likely to share in traditional female tasks. But, in keeping with the J-curve, men who attended religious services weekly did significantly more housework than either the never-attenders or those in the middle.

It seems that women are happier when men are involved at home, and that it matters less whether egalitarianism or faith spurs men's involvement.

Previous work has noted that both feminism and faith call for devoted family men, and that both culturally progressive and religiously conservative fathers report high levels of paternal engagement. Nevertheless, being an engaged father by rough-housing with the kids while mom makes dinner and cleans up afterwards is quite different from being an engaged father who also does housework. Gull and Geist are the first to show that religious men do more housework than others.

We do find it odd that it continues to be surprising to some that religion promotes participation at home. When an opinion piece describing results from The Ties That Bind ran in the New York Times, for example, it was titled "Religious Men Can Be Devoted Dads, Too." But when did this become headline-worthy?

Gull and Geist seem to have uncovered a new pathway to men's participation at home, namely the religious and family-centered one. The commonly recognized non-religious egalitarian path is actually newer. Historically, religion and family-centeredness have gone together, yet the image of the "new dads" is today colored much more by secular egalitarian fathers than by traditionally involved fathers.

There is discourse that claims gendered ideologies inhibit men’s involvement. But most religions are pronatalist and family-oriented. Many religions are also proponents of traditional gender ideologies that view the man’s role as leader, protector, and provider. Given that understanding, it seems safe to assume that many highly religious men have a vested interest in carrying out their role as the family head with involved love and devotion, especially, since faith adds a certain divine calling to each of the roles. It would be surprising if a man called to value his wife above his work would be content to spend his evenings being served by her.

We conclude with a recommendation that is more for the academics in the crowd than those with practical interests in family. Sociologists recognize that people "do gender" in their daily lives, a phrase that refers to behaviors appropriate to socially constructed understandings of gender. As Gull and Geist write: "The extent to which individuals do gender is notoriously difficult to assess, but we include a measure that indicates adherence to traditional ideas about the division of labor between spouses in the labor market."

They are not alone in reducing "doing gender" to the male breadwinner/female homemaker roles. If, instead, scholars recognized that religiously constructed understandings of gender require religious men to “do gender” at home as well as in the marketplace, they might be less surprised that highly religious men are involved at home. That would also explain why men whose lives are not highly scripted by either egalitarianism or religion comprise the trough of the J-curve when it comes to housework.