Race, Ethnicity, and Family Stability in Red and Blue America

Many debates about contemporary family trends involve a clash between two schools of thought, one emphasizing demographic and economic factors and the other emphasizing culture, morality, and religion. The research brief released at Family Studies last week has revealed those fault lines once more.

In the brief, we explored how states’ varying levels of family stability relate to their voting patterns in presidential elections. Teens are most likely to have grown up with their continuously married biological parents in the nation’s bluest and reddest states, according to data from the Census Bureau’s American Community Survey. We argued that the most liberal states foster family stability partly by emphasizing the value of education and delayed family formation, while the most conservative states achieve high rates of family stability partly because of their normative and religious commitment to marriage.

Some observers believed the brief did not give sufficient weight to a third factor: how race and ethnicity affect states’ family stability. For instance, Naomi Cahn and June Carbone, whose work on red and blue families the brief referred to, criticized David Leonhardt’s analysis of it at The Upshot for “largely dismiss[ing] the influence of racial factors,” and others have argued that the link between a state’s political culture and its rate of family stability all but disappears when race and education are controlled for. (Zill offers a response to that line of argument here.)

1)    How does family stability in America vary by race and ethnicity?

2)    Does the red-state/blue-state pattern in family stability play out similarly or differently for whites, African Americans, Hispanics, and Asian Americans?

There are marked differences in family stability by race and ethnicity in America. Adolescents from Asian-American families (65 percent) are most likely to live with their married biological parents. Fifty-four percent of white teenagers live with their married biological parents, compared to 41 percent of Hispanic and 17 percent of African American adolescents. Family stability in America clearly varies by race and ethnicity.

Do these racial and ethnic variations, in turn, explain away the differences in family stability by political culture we reported in this space last week? No. Controlling for race and education reveals a modest but statistically significant, positive link between our Red State Index score and the proportion of 15- to 17-year-olds living with their continuously married parents in recent years (2008-2011). But examining the geographic patterns for each of the four main racial groups—white, black, Hispanic, Asian—tells us that the red-state/blue-state story is not the same for each of these groups in America. 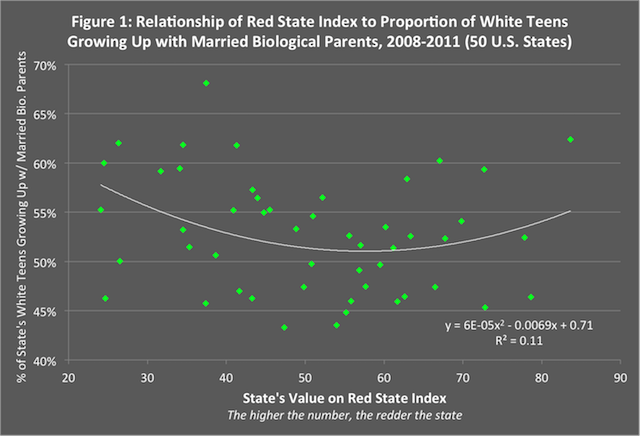 It also means, as Leonhardt’s emphasis on the North-South parenting divide would suggest, that white teens living in the South (including the Southeast) are the least likely to live with both married parents. White children in Arkansas and Nevada are especially likely to grow up outside of an intact family. 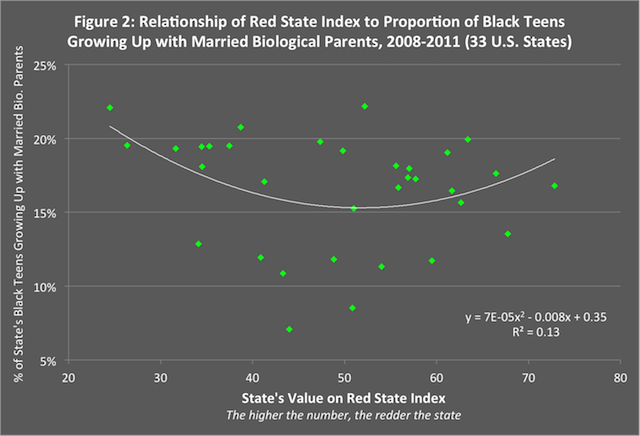 The political ideology–family stability relationship for black teens is similar to that of white teens, as a comparison of the two scatterplots shows, and the Red State Index score explains a similar amount of state-to-state variance in family stability among whites and blacks. (We only included in the scatterplot states with a population of African Americans large enough to produce reliable estimates, and did the same for Hispanics and Asians below.) Interestingly, the North-South parenting divide does not apply in a straightforward fashion to African Americans. African Americans are most likely to live with both parents in Virginia, Massachusetts, and Washington, and least likely to live with both parents in Pennsylvania, Missouri, and Wisconsin. 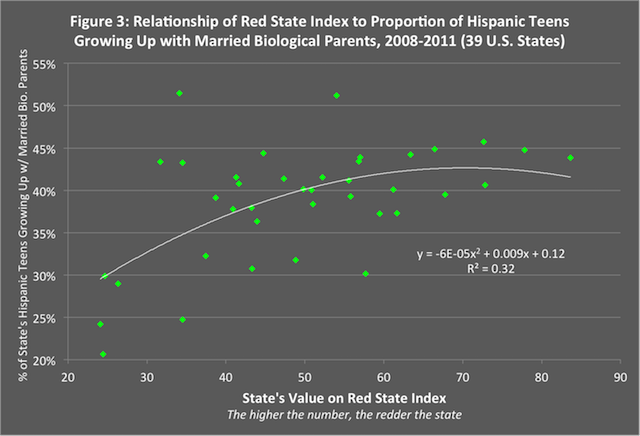 Surprisingly, the link between family stability and Red State Index score is strongest among Hispanics. That is, political ideology explains more state-to-state variance in family stability levels for Hispanics than for any other racial group. Indeed, Hispanic teens in very blue states are considerably less likely to have grown up with their continuously married birth parents than their counterparts in redder states. However, the composition of the Hispanic population varies between states in terms of national origin (Puerto Ricans make up a higher share of the Hispanic population in the blue states of Connecticut, Massachusetts, and New York than in the red states of Texas and Nebraska, for instance).  Immigrant/nativity status of Hispanics also varies across states, and that variable is relevant to family formation as well. All of which makes state-level trends among Hispanics harder to analyze. We are hesitant to draw firm conclusions about the association between political culture and Hispanic family stability before exploring these issues further. 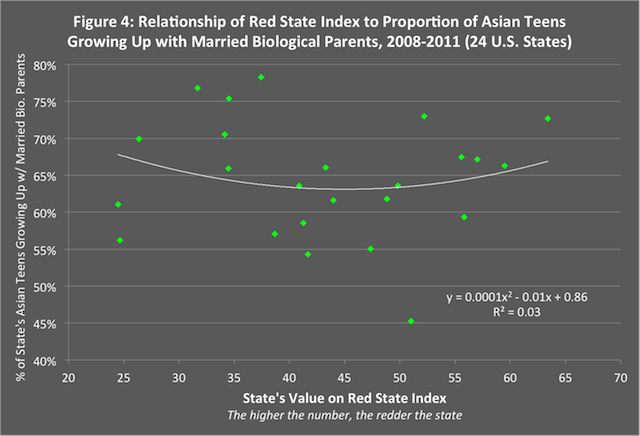 On average, Asian teens are more likely than teens in any other racial/ethnic group to have grown up with their married biological parents. The relationship between that measure and the Red State Index score for Asians is very weak. But only 24 states have an Asian population large enough to yield reliable estimates from ACS data, and the national origins of Asian Americans, like those of Hispanics, vary from one region to another, which makes it difficult to draw conclusions about family formation patterns among Asians as a group.

As these figures illustrate, the Red State Index–family stability link varies somewhat between different racial/ethnic groups. But the link for teens of all races combined is not merely a product of states’ racial demographics. As the full research brief explains in greater depth, teens’ chances of enjoying a stable family are also shaped by education levels and by culture. That means American children—including white and black children—are most likely to grow up in an intact, married home in the bluest and reddest states in America.

Nicholas Zill is a psychologist and survey researcher who has written on indicators of family and child wellbeing for four decades. Prior to his retirement, he was the head of the Child and Family Study Area at Westat, a social science research corporation in the Washington, D.C., area. W. Bradford Wilcox is a senior fellow at the Institute for Family Studies, a visiting scholar at the American Enterprise Institute, and the co-author of “For Richer, for Poorer: How Family Structures Economic Success in America.”