We like to think of America as sexually permissive. We’re bombarded with stories of rapid-fire Tinder liaisons and meaningless college hookups. The reality isn’t monastic but is more staid than most of us think. The median American woman has had three sex partners in her lifetime. The median man has had five.

These numbers have remained unchanged for decades: you have to look at people born prior to the 1940s, who came of age before the Sexual Revolution, to find lower numbers. The one exception is college-educated men, whose median tally has declined over the past couple of decades (the numbers for men who didn’t complete college have stayed the same).

But medians don’t tell the whole story. The distribution of promiscuity is skewed to the right: most people have only a few partners, but a few people have a whole lot. The data look like this:

Who are these people? In the following pages, I present a statistical portrait of Promiscuous America by using General Social Survey data collected between 1989 and 2016 (earlier surveys didn’t query respondents about their sexual histories). The multiple waves of data provide a sample of over 30,000 respondents and therefore enough cases to look at sexual behavior at the margins.

My examination focuses on the upper five percentiles of promiscuity; in other words, the 5% of Americans who report having more sex partners than the other 95 percent. I also look at the top one percentile of promiscuity where there are sufficient sample sizes to do so. Except where noted, the results are similar for the top-five and top-one percent of promiscuity. Finally, my tally of sex partners ignores sexual orientation.

Overall, younger Americans are now having sex with fewer people than their Boomer or Gen X elders, but that’s not the case for the female promiscuous minority. The figure below looks at what portion of the sample for each survey year falls into the top five percentile for the entire sample; in order words, what proportion of women for each survey year had 16 or more partners. The data show a linear increase in the percentage of women who fall into the high side of sexual adventurousness. In 1990, about 3% of women had had over 15 sex partners. By 2016, this number was up to 7 percent. Additional analysis suggests that women’s increasing sexual adventurousness over the years of the time series represents a secular trend towards promiscuity. 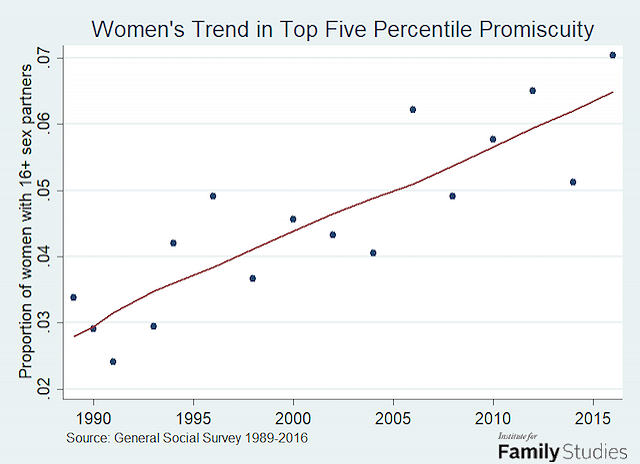 The story is different for men, for whom promiscuity was most common in the previous decade. Since then, a declining proportion of men have had 50 or more sex partners. Still, top-five percentile sexual exploration remains a bit more common for men than it was in the early 1990s, near the beginning of the time series. 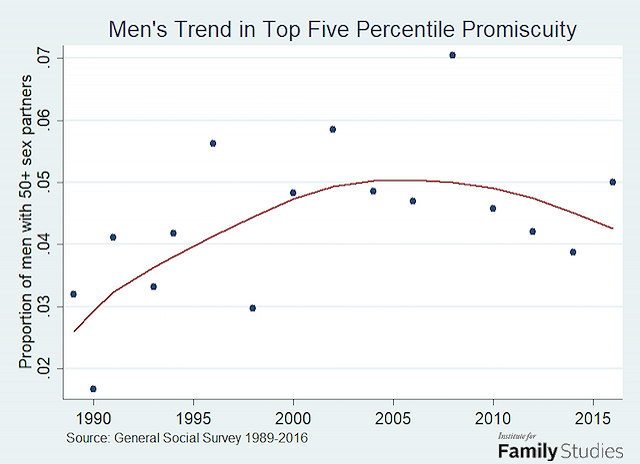 It’s also predictable that the promiscuous are less religious than other Americans, but there are nevertheless interesting differences by denominational affiliation. Christians are the least likely to fall into the top 5% of the promiscuity distribution. Still, in terms of sheer percentage points, the differences between Christians and nonbelievers are not enormous. When it comes to “Other” faiths (including Muslims, Hindus, and myriad less common religions), the men behave like Christians. Other-faith women are more likely to reside in Promiscuous America Of all survey respondents to claim a denominational affiliation, Jews are the most likely to report high promiscuity (8% of Jewish women, 6% of Jewish men). The highest levels of promiscuity naturally belong to Americans who don’t claim a denominational affiliation. This includes 10% of unaffiliated women, and 7% of unaffiliated men. 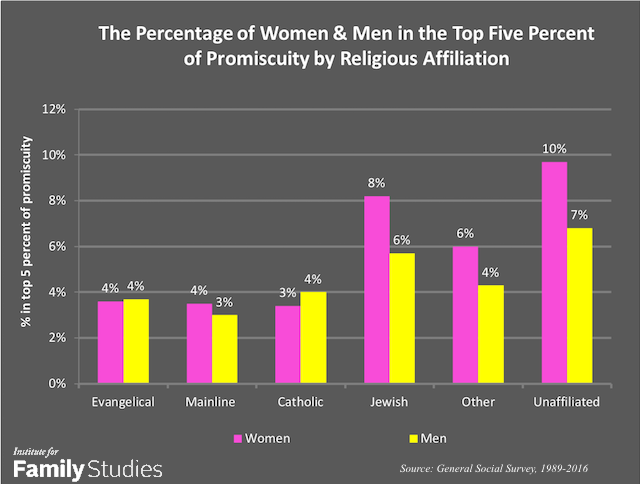 Religious participation also has the anticipated negative correlation with promiscuity: the most sexually adventurous Americans are least likely to attend religious services. Regular attendance (defined as several times a month or more) translates into the lowest odds of sexual sybaritism. Only 2% of survey respondents who attend religious service regularly fall into the top five percentile of promiscuity, whereas 7% of non-attenders do. Occasional attendance produces middling rates of sexual adventurism. Regularly darkening the door of a church, synagogue, or mosque may both reinforce doctrinal proscriptions against promiscuity and offer social reinforcement about the desirability of monogamy. 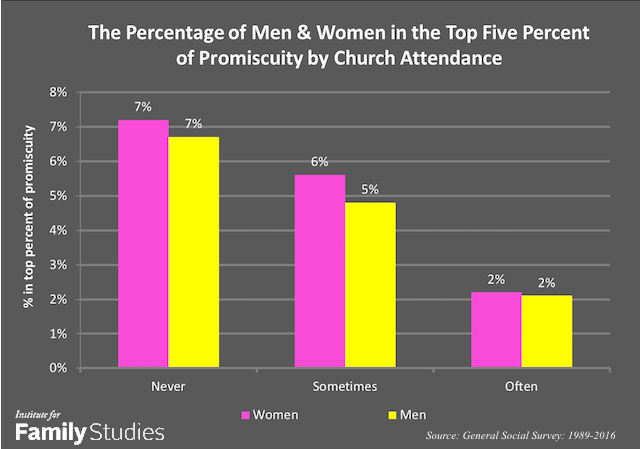 ​​​The Unanticipated Correlates of Promiscuity

Two related factors—education and intelligence—are highly predictive of having a large number of sex partners. Some of us have a mental portrait of Promiscuous America that looks like the Jerry Springer Show, but this doesn’t seem to comport with reality. People with post-graduate degrees are much more likely than their less-educated peers to be promiscuous, and this is especially true of women. Over 2% of women with advanced degrees fall into the top percentile of promiscuity; in other words, over 35 sex partners. Almost 1.5% of men report top-percentile promiscuity of 150 or more partners. Both these numbers are far higher than they are for people with less formal education. Generally speaking, people with high levels of education have the highest marriage rates and the lowest divorce rates, but their ranks also contain a sprinkling of sexual sybarites. 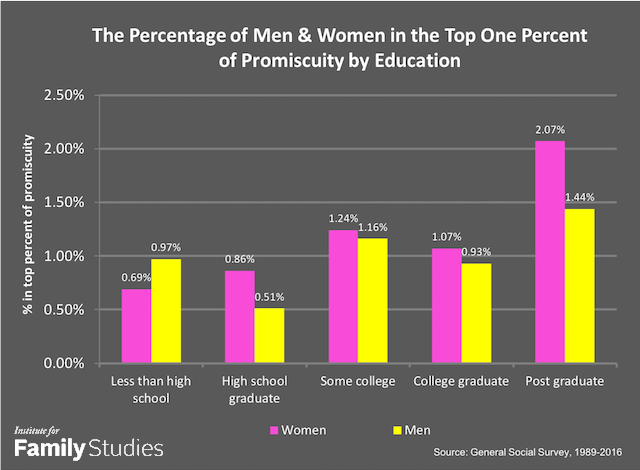 Related to education is the comparably higher intelligence of sexually adventurous Americans. The General Social Survey contains a 10-word vocabulary test that has been shown to have a high correlation (r = .71) with sophisticated IQ test results. Obviously, a 10-question test can’t do justice to a complex concept like intelligence, but for ease of explication, I’ll refer to its results as reflecting IQ or intelligence. 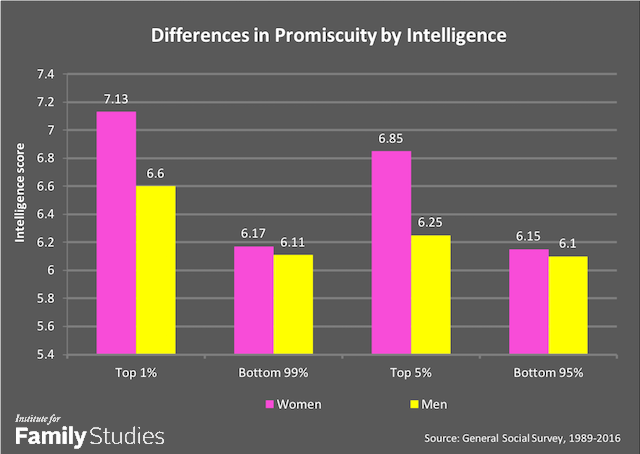 Does It Matter if You’re Promiscuous?

There are modest but still statistically significant differences in respondent happiness by promiscuity. The 5% most promiscuous respondents of both sexes are less likely to report being “very happy” and more likely to say they are “not too happy.” This pattern holds for women when looking at the top one percentile of promiscuity, but not men. In other words, men who report having had 150 or more sex partners are not any happier or unhappier than their non-Lothario counterparts, but that’s not true for women. 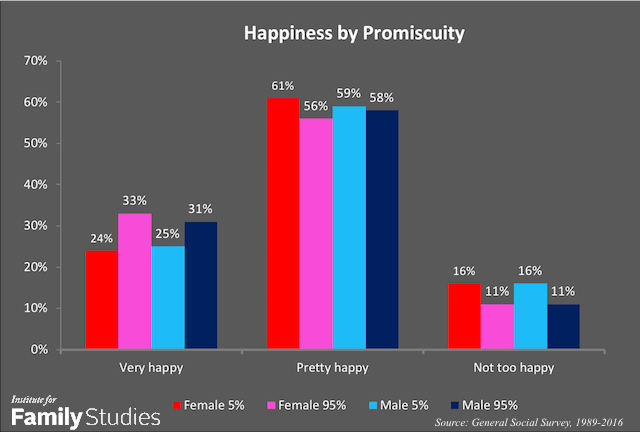 Multivariate analysis reveals that the happiness gap between Promiscuous America and their less sexually adventurous peers can be partly explained by marital status. Recall that promiscuous survey respondents are less likely to be married and more likely to be divorced. Regular readers of this blog are well aware of the fact that marriage and happiness are correlated, and this association might account for why some promiscuous adults are less happy. But there are likely other reasons, some of which might be anterior to both unhappiness and promiscuity. For instance, childhood sexual abuse increases the later-life chances of both promiscuity and unhappiness. In other words, there is no way of knowing if promiscuity is directly causing people to be unhappy.

The happiness story changes when promiscuous Americans get married. These respondents are not more or less happy in their relationships than their non-promiscuous peers. Some may have relegated their infidelities to their first marriages. A small number may be in polyamorous or other forms of open relationships, although it’s impossible to know with these data.

Contrary to public perception, typical sexual behavior hasn’t changed much in recent decades. But there will always be outliers, Americans who have a multitude of sex partners. This behavior is becoming more common for women, but less common for men. Perhaps these women are experiencing the last stages of the Sexual Revolution, stages that came earlier to men. It’s evidence for this proposition that there is no male equivalent to the term “slut shaming.”

Promiscuous America is urban, secular, and politically progressive, as well as smart and well educated. On average, educated people with high IQs are more likely to get married and stay married. But averages don’t reveal human behavior at the margins, and a narrow sliver of intelligent and highly-educated Americans are departing from sexual norms. The reasons why are among the most intriguing questions raised by this research brief. The answers require in-depth interviews and psychometric data.

The appeal of promiscuity is the excitement of diverse sexual experiences. Some people may be more suited to sexual sybaritism than monogamy. For others, the downside is less happiness over the long haul, and for these people, promiscuity may be more a reaction than a conscious choice. 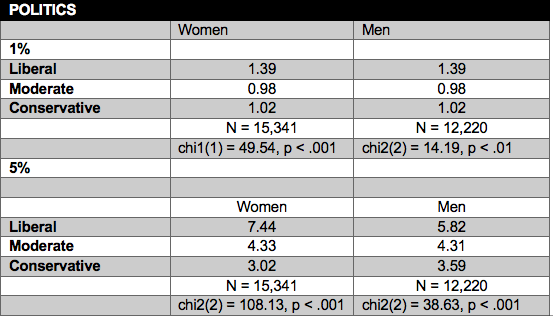 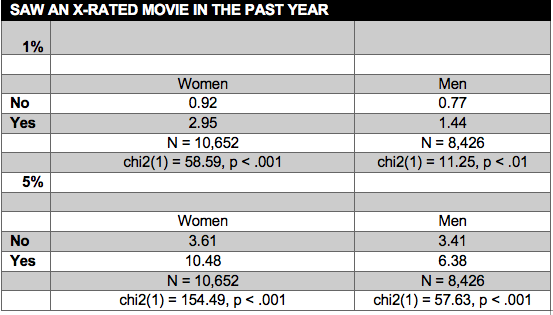