How do politicians get away with telling lies about their accomplishments or blatantly exaggerating the effectiveness of government programs? They do so because many members of the public, young and old, are not very knowledgeable about national issues. In a nationwide study, the Department of Education found that a typical high school student scored only 33% on a short quiz covering basic facts about the U.S. government and politics, such as the name of the current Vice President or what the first 10 amendments to the Constitution are called. Their elders didn’t do much better: a typical American adult scored only 53% on the same quiz.1

In 2018, a continuing monitoring program called, “NAEP,” or “The Nation’s Report Card,” found that more 8th Grade students scored “below basic” in civic awareness (27%) than were deemed “proficient” in their knowledge of government (24%). The rest (49%) had only a minimal, “basic” understanding. Furthermore, the state of civic knowledge of American students has not improved over the last two decades.2

Who is to blame for this state of affairs? Many commentators are quick to accuse schools, while others point their fingers at television and radio broadcasters for failing to inform their audiences about the basic facts and processes of our political life. Sociologist John Robinson of the University of Maryland contrasts mass media reporting on government and politics, which deals mostly in disconnected, “breaking news” coverage of electoral races and governmental scandals, with TV weather reporting, where the atmospheric processes behind tomorrow’s forecasts are laid out in graphic detail on a daily basis.3

While schools and mass media must take some responsibility, my analysis of public-use data from the Department of Education suggests that the development of political awareness among young people starts in the family. High school students’ performance on the political knowledge quiz is directly related to the educational attainment and family income of their parents and varies with family structure and across racial and ethnic groups. Similar relationships apply to 8th graders’ performance on the NAEP civics assessment.

Adjusting the parent score-child score relationship for background factors, like parent education level, family income, and race, weakened the correlation somewhat.5 But the correlation remained significant, both practically and statistically.

Interestingly, the relationship between parent score and child score was stronger when parent and child were biologically related than when the parent was an adoptive parent or stepparent who was genetically unrelated to the child6 (see Figure One). Not surprisingly, this suggests that political knowledge is related, in part, to general intelligence.7 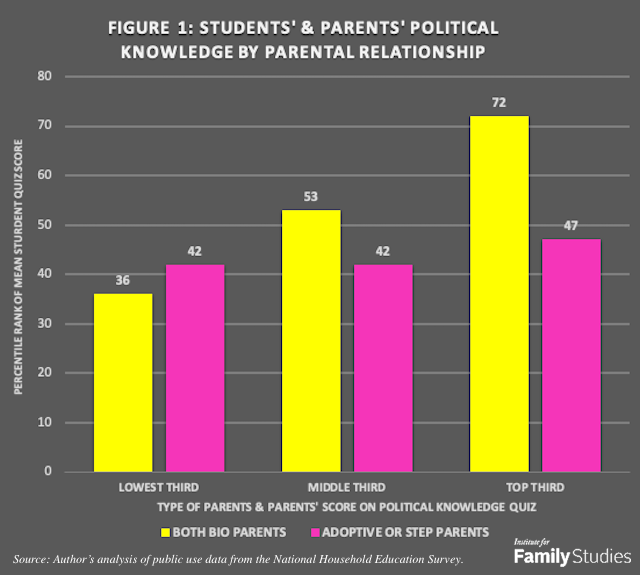 Students earned higher scores on the political knowledge quiz if they talked with their mother or father frequently about national issues and current events. Regrettably, only 5% of students reported having such conversations “almost daily,” whereas 47% “hardly ever” did.8 As shown in Figure Two, those who reported having such conversations almost every day or at least once a week scored at the 67th percentile, whereas those who hardly ever conversed about issues scored at the 38th percentile. Adjusting for family background weakened the relationship, as shown in the figure as well, but it remained significant. 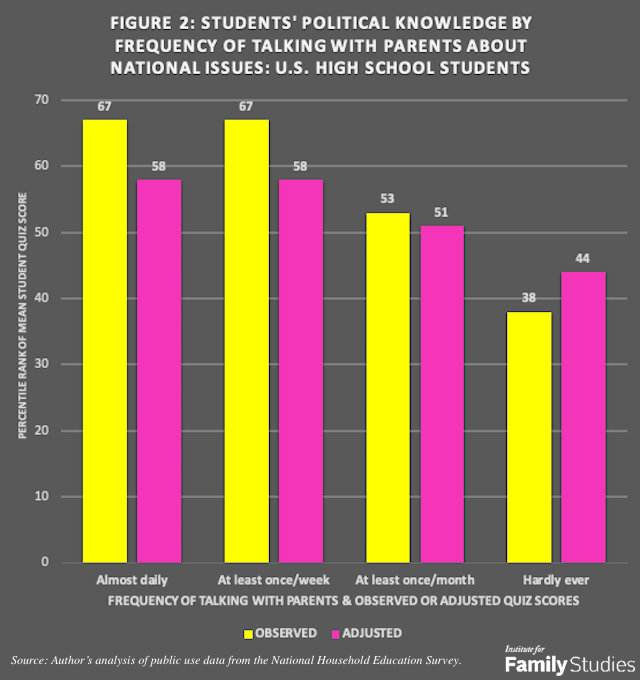 Families that subscribe to newspapers or news magazines tend to have students who are more knowledgeable about government and national politics. Yet only 9% of high school students reported reading newspapers on a daily basis, whereas 43% hardly ever did.9 Students who reported reading about national news in newspapers or news magazines almost every day scored at the 70th percentile on the political knowledge quiz, whereas those who hardly ever did such reading scored at the 37th percentile. Those who read about once a week or once a month had intermediate scores, as shown in Figure Three. Adjusting for family background reduced score differences, but the relationship remained linear and significant. By contrast, the regularity with which students reported watching national news on television or listening to news on radio was not significantly related to their political awareness score.10 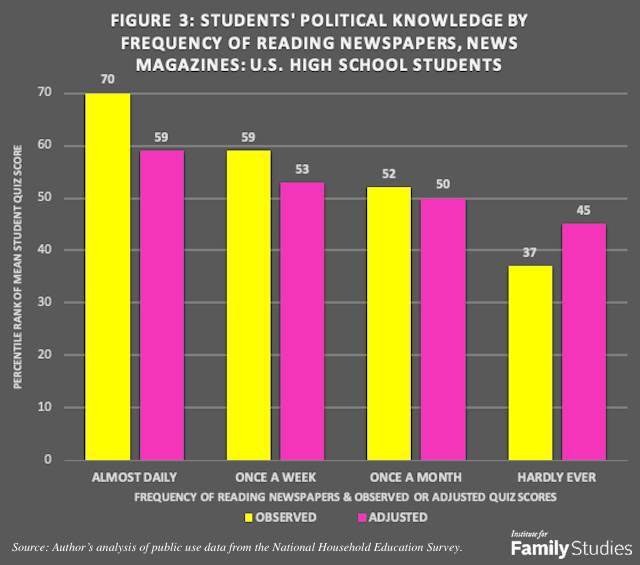 Differences between school types were reduced after adjusting for family background factors, as shown in Figure Four. The adjusted scores for students in Catholic schools and non-denominational private schools remained significantly higher than the average score for public school students. 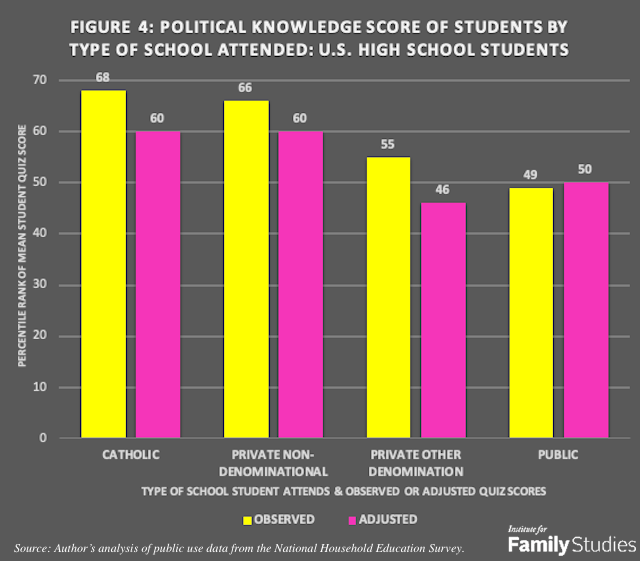 Differences in civic knowledge across school types have also been found in the NAEP civics assessments. In 2018, 41% of 8th Graders in Catholic private schools were found to be proficient or advanced in their civics knowledge and skills, compared to only 22% in non-charter public schools. Students in public charter schools did slightly better (26% proficient or advanced). Conversely, the proportions of students whose civics knowledge was below the basic level was only 9% in Catholic schools, compared to 23% in charter schools and 29% in regular public schools.

High school students who have taken courses in government or civics tend to have greater political awareness than those who have not had such courses. Students who were taking such a course in the current school year scored at the 54th percentile on the political knowledge quiz, while those who took such a course in the previous year as well scored at the 58th percentile.12 Both groups had significantly higher scores than students who took the course in the previous year only (48th percentile) or had not taken one either year (38th percentile).  The relationship was weakened but remained significant after adjusting for school type and family background factors, as shown in Figure 5. 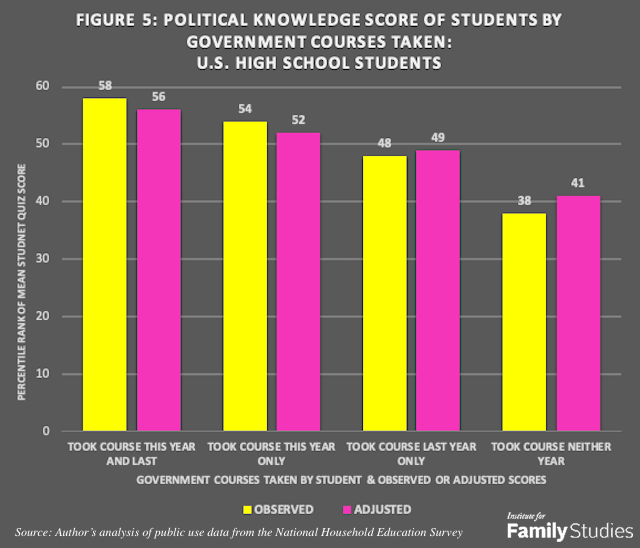 Toward A More Informed Electorate

There is consensus among political scientists and social commentators that a democracy cannot function well without an informed electorate. The findings presented in this brief, plus evidence from many other polls and studies, indicate that much of the American electorate is far from well-informed about vital public issues or how our political system operates. Nor do we seem to be making progress toward ensuring that future generations of citizens will be more politically aware than current ones, despite generally rising levels of educational attainment.

Although individual families cannot change this situation in a major way, parents can take steps to help ensure that their own children develop into knowledgeable, involved citizens. Some of these steps are the following, each supported by results described above:

While taking these steps, parents can also help their children understand that other persons may have different political perspectives, that those with differing points of view should be respected, and that open discussion and debate of opposing viewpoints is not something to be feared or shunned, but is, instead, central to the workings of a healthy democratic society.

8. In addition, 22% of students reported that they talked with parents about national about once a week and 26%, about once a month.

9. In addition, 29% of students reported that they read newspapers or news magazines about once a week and 19%, about once a month.

10. Forty percent of students reported that they watched news on television or listened to it on radio almost every day; 31% did so at least once a week; 12%, about once a month; and 17%, hardly ever.