Pet Owners Are Less Happy Than Americans Without Pets

More and more Americans are pet owners, and they’re spending more money on them. Using industry data from the American Pet Products Association, the share of Americans’ personal income going to the pet industry rose 45% between 1994 and 2019. Official government data shows that the share of national wages being paid to workers in the pet industry rose 74% between 2001 and 2019. Americans now spend more than $90 billion a year on pets, which is almost two times the entire economic output of Serbia or Uruguay.

This rise in pet ownership and spending has been accompanied by an explosion in the public profile of pets: news stories about animal abuse drive enormous attention, spending on pets has risen faster than almost any other product category, and as a result, survey companies have expanded their pet-related offerings. SurveyMonkey says over 90% of people have had a pet at some point in their life, while YouGov says that 56% of women got a pet “to keep me company” (vs. 48% for men), while 41% of men got a pet because a partner or family member wanted it, compared to just 31% for women. Perhaps most remarkably, the 2018 General Social Survey added an extensive questionnaire about pets, asking which pets people currently or formerly had and how they feel about them. There’s even been academic research, suggesting that dogs might improve well-being, and that people with pets have happier Instagram feeds.

But is this pet-mania really making Americans happier? To test this, we need surveys that ask about pets, happiness, and other potential variables that might muddle the relationship between pets and happiness. In popular commentary, pets are an important source of happiness, but we can also imagine that people who are lonely might buy a pet to counteract that loneliness, so studying the relationship between pets and happiness may not be straightforward.

The General Social Survey is a natural place to start. Comparing people who have no pet to those who have any pet, there’s no difference in happiness: about 31% of both groups report being very happy, and about 15% report being not too happy. Likewise, there’s no difference between pet owners and other people in their reported satisfaction with their social and personal relationships, or with their financial situation.

In a multivariable model I performed with controls for age, sex, family size, marital status, employment status, and social and financial satisfaction, having a pet is weakly associated with lower happiness, especially for men or for people who report often taking comfort in their pets or spending lots of time training them. Having a cat is more strongly associated with unhappiness than having a dog, but the differences are small. Broadly, these findings fit well with what we might expect: the YouGov survey mentioned above suggests men derive less direct value from pets, and prior research suggests “dog people” are happier than “cat people, while people who report often taking comfort in their pets may be experiencing sadness for other reasons, and spending more time training a pet may indicate a pet that is poorly behaved. None of this suggests that pets are bad for happiness, but neither is it a ringing endorsement. Americans are spending more time and money on their pets but getting essentially no clear happiness benefit from it.

However, the General Social Survey isn’t the only major survey with information about pets. Since 2003, the American Time Use Survey has asked respondents about time spent on pets. Some people might have pets and not spend any time on them in the surveyed period the ATUS covers, so ATUS wouldn’t provide a complete picture of pet ownership. But by providing a dataset across several years with data about pets and other life conditions, it allows more detailed assessment of the landscape of pet ownership. Figure 1 below shows the share of respondents who report spending any time with a household pet from 2003 to 2019, with separate trends for childless adults under 65, people with children in the house under 65, and people over 65 shown. 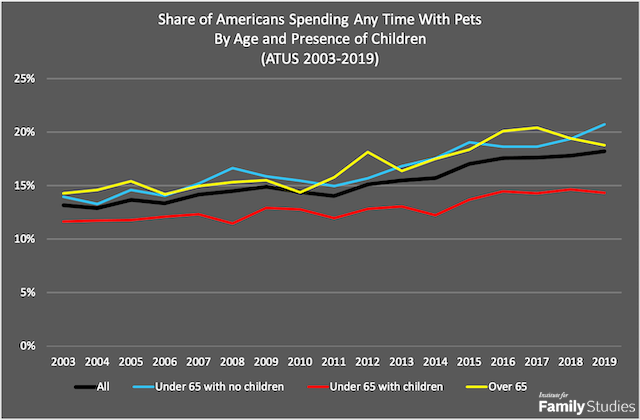 As shown, the share reporting any time spent on pets has risen appreciably, especially since 2011. Retirees and childless people are the most likely to have spent any time on pets, whereas those with children at home are less likely. Similarly, while all groups have seen an increase, it has been largest for retirees and those without children. But while the share who spend any time on a pet has risen, the average amount of time they each spend on their pets has not. The average retiree that spends any time at all on a pet spends about 40-45 minutes in a given day, a figure unchanged since 2003. Childless people spend about 40 minutes, while parents spend about 30-35 minutes on pet care.

These trends also vary by sex. Figure 2 shows the share reporting any time spent on a pet by sex, age, and presence of children. 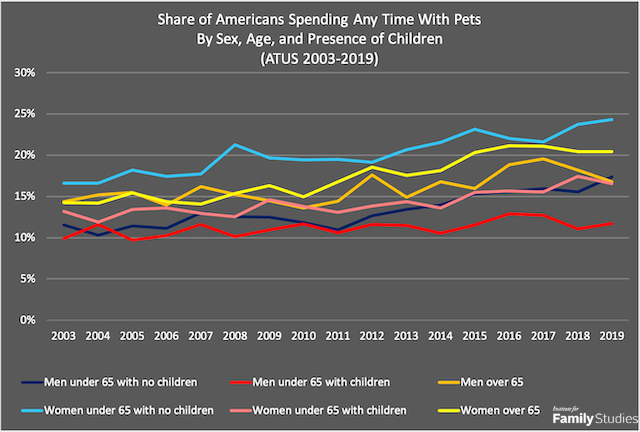 Women under 65 with no children are by far the most likely to report spending time with a pet, though in recent years, women over 65 have started to catch up. Among parents, women spend much more time with pets. If I restrict the search to just married parents, married mothers are much more likely to report spending time with a pet than married fathers (17-19% vs. 11-14%, respectively). This points to the challenges in using time spent on pets as a direct measure of pet ownership: in households with pets, women are more likely to be the primary pet caretakers. That said, again, the YouGov poll cited above suggests this is not just due to things like women being more likely to be homemakers than men, or due to men not wanting to do household chores: men are much more likely to say they got a pet because their partner wanted one, while women are far more likely to cite personal preference reasons like a desire for companionship, comfort, or to give a pet a good home.

So what about happiness? Does this more precise measure of time spent with pets correlate with happiness? In 2011 and 2012, ATUS added a “well-being module,” which asked respondents a question about how happy they were with their life using a “life ladder” approach; basically, they rated their happiness or satisfaction with life on a scale of 0 to 10. The average respondent gave a score of about 7.1, so I look at the odds that a person gave a score of 8 or higher, indicating a high level of happiness. Figure 3 below shows the average life satisfaction rating by sex and broad demographic category, directly comparing those who did or did not report spending time with pets.1 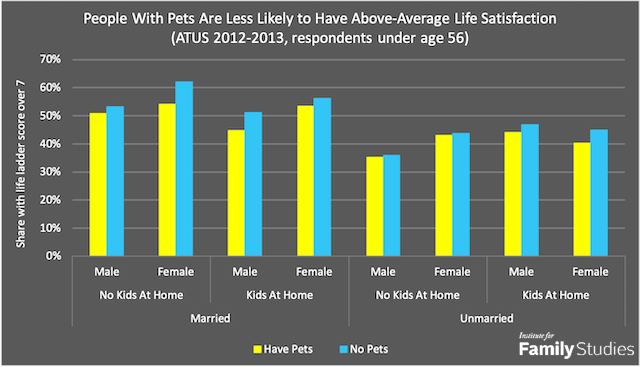 As the figure above shows, for every group, spending any time with pets is associated with lower life satisfaction. The change in odds that a person is very satisfied with their life that is associated with having a pet is highest for married women without children: married women without children who have a pet are much less likely to have high life satisfaction than those without a pet.

In formal multivariable models with broad controls for things like family structure, age, employment status, coresidence with elders, disability, education, etc., the significant negative effect of spending any time on pets on happiness persists. People who spend time on household pets are simply less happy than demographically similar people who do not spend time on household pets.

These effects aren’t just statistically significant: they’re quite large. Spending any time with pets is associated with a happiness decline about one-third as large as living with your parents, and about one-fifth as large as being disabled or unemployed. Having a pet reduces happiness by about half as much as being married increases it. These effects are even larger for the subset of people who spend more than an hour on pet care in a given day. While the happiness effects of children are hotly debated, I find that the decrease in happiness associated with having a pet is about the same size as the increase in happiness associated with a married couple having a child.

Does this mean that, contrary to popular narratives, pets do not make people happy? Not necessarily. Cross-sectional studies like this can’t really identify causality, and it’s extremely likely that people who have pets want to have pets, regardless of abstracted happiness effects, and so losing a pet would probably make them less happy. It’s also likely that people with pets, and especially those spending the most time with their pets, are disproportionately people experiencing other, harder-to-control adverse life circumstances or forms of loneliness, such as unwanted singleness or childlessness, widowhood, etc. In this case, the negative effect observed for pets could simply arise because of imperfect controls for the emotional losses associated with those circumstances and events.

But some conclusions can be ventured. We may not be able to resolve the question here about whether or not pets make people happy, but we probably can place an upper boundary on the plausible effects of pets. It’s clearly the case that pets don’t increase happiness enough to stave off large negative effects associated with the loneliness that might arise from undesired singleness or infertility. Having a pet is no compensation for being unemployed. A dog does not eliminate the loss in life satisfaction associated with disability. It’s possible having a pet moderates these effects, but it doesn’t fully offset for them.  Pets are no substitute for human family, despite the view of 76% of pet-owners surveyed in the GSS saying they “almost always” view their pet as a family member. While buying a dog may or may not increase happiness, it’s unlikely to have much of an effect on decreasing the loneliness people often hope pets will help curb.

1. I focus on people ages 18-55, and break out results by marital status and whether there are kids at home, to identify how happiness varies not just across pet-ownership, but by marriage and childbearing status.