For the millions of Americans who wait until the last minute to file their taxes, Tax Day always arrives too early, even when it comes three days later as it did this year. According to the IRS, 40 million Americans had not yet filed their taxes as of last week, and this week, it expects to receive 12 million returns from last-minute filers (including millions who will file today), along with at least eight million requests for extensions.

If you are married or thinking about getting married, it might be disheartening to learn that married Americans continue to foot the bill for the overwhelming majority of federal income taxes. A new analysis from the Pew Research Center reports that even though marriage has been declining over the past four decades in the U.S., married couples still pay a disproportionate share of income taxes. 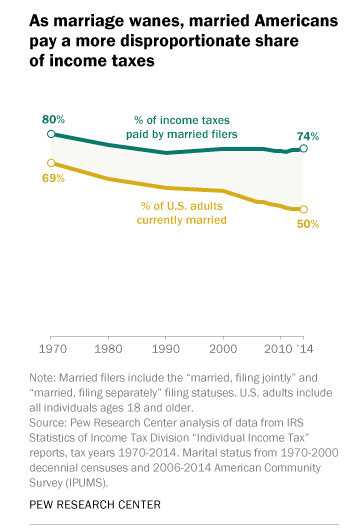 During the same time period, the share of tax returns filed by married couples declined even more, from 60 percent of all federal returns in 1970 to only 38 percent in 2014.

An earlier Pew report by Wendy Wang and Kim Parker identified a number of reasons for the decreasing share of married adults, including that men and women are delaying marriage longer today (the average age at first marriage is 29 for men and 27 for women, vs. 23 for men and 20 for women in 1960) and more couples are cohabiting and raising children in unmarried unions.

The retreat from marriage is also related to the marriage and education gap, which helps explains why married Americans who only make up half the adult population continue to pay the majority of taxes. Anthony Cilluffo, the author of the new Pew report, writes that it is partly due to “the changing demographics and economics of marriage. Marriage is increasingly linked with higher levels of education, which are in turn linked to higher incomes." 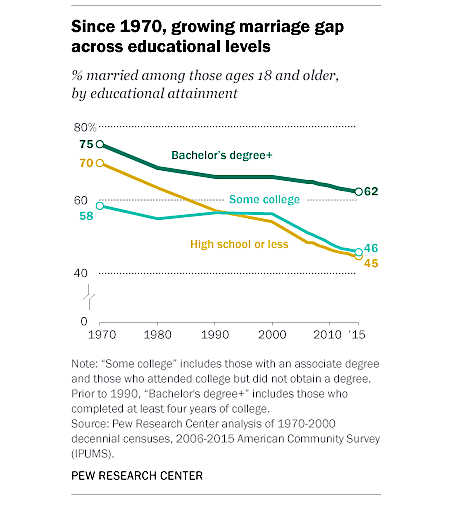 While there are fewer married adults to file tax returns today, those who do marry are more likely than single Americans to pay federal income taxes. Most married couples also file jointly, which puts them in a higher tax bracket. According to the Tax Foundation, “a large share of married couple tax returns have two incomes and thus are now clustered in the upper-income groups facing the highest marginal tax rates.”

Of course, the amount of taxes that married couples pay depends on a number of factors, including total household income, whether one partner earns more, about the same, or less, and the number of children. Couples who earn about the same are more likely to face higher tax rates (the “marriage penalty”) than couples where one partner earns significantly less. While the marriage penalty can impact both low and high-income couples, the Tax Foundation explains that lower-income couples can face significant marriage penalties, often due to the impact of the Earned Income Tax Credit (EITC).

Is it Fair for Married Americans to Pay More Taxes?

In response to the Pew report, progressive sociologist Philip Cohen recently tweeted, “given the social rewards from marriage, I think a marriage tax is fair.”

Marriage is indeed a wealth-generating institution, providing a myriad of socio-economic benefits to individuals of all social classes. Not only is it one of the most effective means of helping to lift families out of poverty, but being raised in an intact, married-parent family also increases the likelihood that children will graduate high school and college, get married and stay married, and earn a higher income as adults.

Because marriage is associated with income pooling, more savings, and better economies of scale, marriage is also linked to more prosperity, net of men and women’s other background characteristics. Married families are also less likely to experience income insecurity and poverty. All these factors help explain why the married tend to pay more in taxes than the unmarried, and why married families are less likely to depend on the government for financial support.

While he agrees that it’s fair for higher-earning married Americans to pay more in taxes, Wilcox emphasizes that “the tax and transfer system should try not to penalize marriage, especially in comparison to cohabitation.”

Given the social and economic benefits of marriage, at the very least, government policies should avoid discouraging couples from marrying and overly burdening married families, including through the tax code. With this in mind, Congress should take steps to enact family-friendly tax reforms, such as: expanding the Child Tax Credit; providing alternative payment options for the Earned Income Tax Credit program and eliminating the marriage penalties in the EITC; and ensuring that tax relief related to child care expenses includes stay-at-home parents.

The rewards of marriage extend beyond individuals and families to entire communities. As the White House and lawmakers consider various tax reform proposals, the guiding principle should be to safeguard the premier institution that offers every American the best shot at economic and social mobility.