No “One Size Fits All”: Parents’ Preferences for Work and Child Care

Earlier this month, the democratic presidential debate put the issue of child care back in the national spotlight. Universal child care, as Senator Elizabeth Warren (D-MA) argued, would be helping millions of families and get women back on the career track. And Senator Bernie Sanders (D-VT) stated, “Every psychologist in the world knows 0 through 4 are the most important years of human life intellectually and emotionally, and yet our current child care system is an embarrassment.”

In a recent survey of adults ages 18 to 50, we asked the question “What do you think would be the best arrangement for a family when there is a child under 4”? 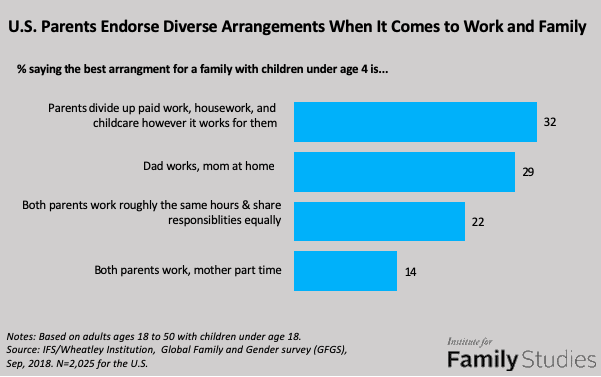 The most popular choice was an approach where, “the parents divide up paid work, housework, and child care however works best for them.” About one-third of parents in the survey thought this was the best arrangement.

Findings are similar when we look at only parents with young children under age 4 at home, the group that is most likely to be in need of full-time child care. And views from the general public are also identical. Among all adults ages 18 to 50 (including non-parents), a similar share (35%) think that parents should arrange child care in whatever way works best for them. Meanwhile, about equal shares of respondents believe either that it is best for the man to work and the woman to manage the home (23%) or that the 50/50 approach is best, where both parents work about the same hours and share the responsibilities equally (25%).

One might argue that given the lack of paid family leave and universal child care in the U.S., parents, and especially mothers, do not have choices at all. As Claire Cain Miller pointed out in a recent NY Times article, “The question is how women’s choices might change if their options were different.”

So let’s take a look at mothers’ preferences in countries where parents do have more access to paid family leave and subsidized child care. With the available data from Canada (which has generous paid leave and where one province, Quebec, has universal child care), the UK, Ireland, and France, our new survey finds full-time work is not the popular choice for mothers in most of these countries. 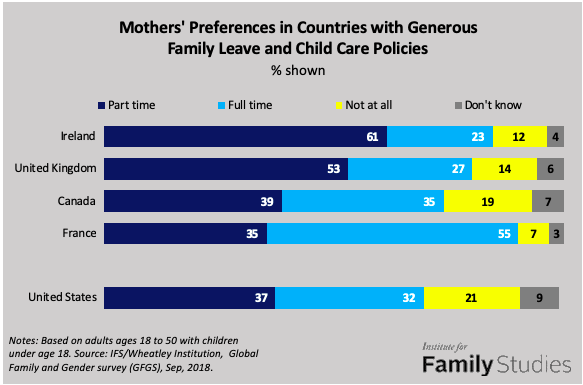 For example, in Canada, where Quebec's program is considered a “model” for universal child care, only 35% of mothers with children under age 18 say working full time would be their ideal situation. And the share is 23% in Ireland and 27% in UK, where subsidized child care was enacted in more recent years. One exception is France, where over half of mothers prefer to work full time (55%), and 42% view either working part-time or not at all as the ideal situation for themselves.

At the same time, just like in the U.S., a larger share of mothers in most of these countries favor either part-time work or not working for pay at all, even when generous paid leave is offered and childcare is free or easily affordable.

The debate about whether or not American mothers have choices also misses one crucial point. In 1995, Harriet Presser, a professor at the University of Maryland, asked: “Are the interests of women inherently at odds with the interests of children or the family?” Her question remains relevant today. Why is it that we focus primarily on mothers’ choices when it comes to child care? Shouldn’t fathers be part of the picture, too?

In fact, fathers are eager to be more involved. American fathers today spend about three times as much time caring for their children as fathers in the 1960s.  And there have been a growing number of fathers who choose to stay at home and care for their kids. And when asked about their “ideal situation,” 17% of American fathers say they prefer to either work part-time (10%) or not work at all outside the home (7%). Even though a majority of fathers still prefer full-time work, we should not ignore the millions of fathers who want to be more involved in the day-to-day care of their children.

Parenting is one of the toughest and most rewarding jobs in the world. When comparing time caring for children vs. time at work,  time diary research confirms that parents feel that time spent taking care of their children is more exhausting than paid work, yet they also find child care activities more meaningful and rewarding.

By the same token, American parents value parenthood much more than the work they do for pay. In the survey, we asked respondents to rate the importance of different aspects in their life, including having a successful marriage, being a good parent, work, and their faith or religion. 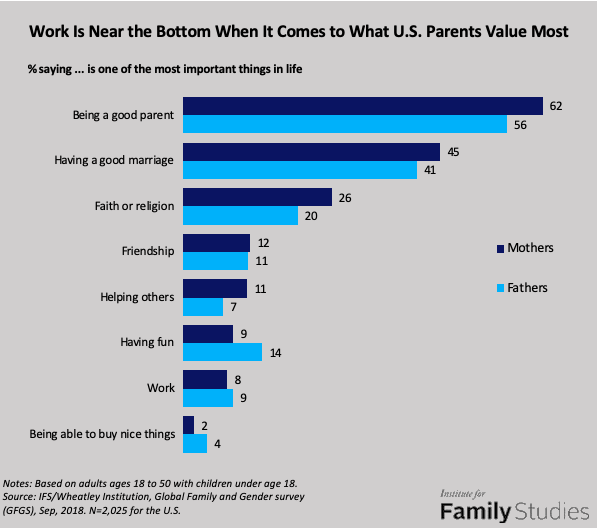 We should not devalue the work that women and men do at home when they care for their children. This unpaid work supports children, the most precious resource for our future. At the same time, the preferences of mothers and fathers who do prefer to work full time and who need help caring for their children, whether it is via day care centers, families, or friends, should also be respected. And we must not lose sight of parents who have fewer choices and therefore need the most support. They may have special needs children, or may be single moms or dads, or work at minimum-wage jobs. Their needs and desires should be acknowledged.

In the same way that we appreciate diversity in many aspects of our lives, we need to respect the diverse views and desires of American parents about work and family. Instead of mainly focusing on child care options that help mothers get back on the career track, our policies should seek to empower both mothers and fathers to choose the best child care arrangement for their families, whether they want to return to work, work part time, or stay at home full time.