In July, Ashley Madison—the infamous cheating website whose 37 million clients were exposed by a hacker last year—launched a new ad campaign aimed at rebranding the commercialization of infidelity. According to The Atlantic, the changes include a new tagline—from the in-your-face, “life is short, have an affair,” to the perhaps more subtle, “Find your moment.” The company’s president explained the rebrand as an effort to “evolve, grow and attune to modern sexuality in 2016.”

While Ashley Madison’s creators might be trying to revamp the public image of cheating-for-hire, the vast majority of American adults still disapprove of cheating on a spouse. But that might be changing among younger generations, according to new research from Paul Hemez at the National Center for Family and Marriage Research (NCFMR) at Bowling Green State University.

Hemez used data from the General Social Survey (GSS) to examine adult attitudes about marital infidelity, including changes in attitudes since 1973, as well as by age, gender, education, marital status, and race in 2014. He found that since the early 1970s, American adults have generally become more disapproving of infidelity—with disapproval increasing by 20 percent between 1973 to 2008 when 84 percent agreed that it’s “always wrong” for a married person to have sexual relations with someone other than their spouse. However, in 2014, the proportion of Americans who agreed that extramarital sexual relations are “always wrong” declined to 79 percent (see Figure 1). 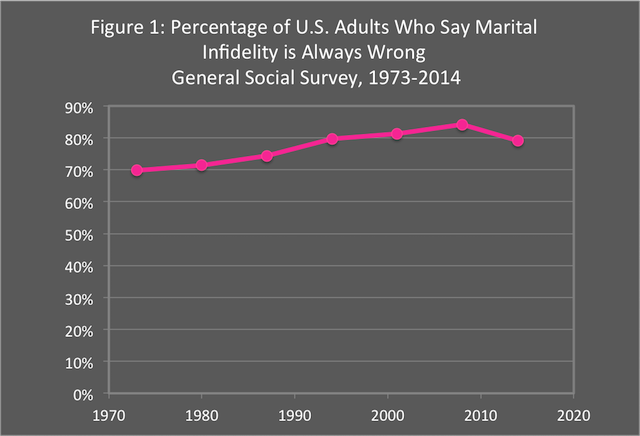 Why the decline after years of steadily increasing? Hemez notes that it could be due to the recent inclusion of Millennials (ages 18 to 33) in the GSS survey. Compared to older generations, Millennials, who accounted for 27 percent of the sample in 2014, reported the lowest disapproval of infidelity at 75 percent (see figure 2). 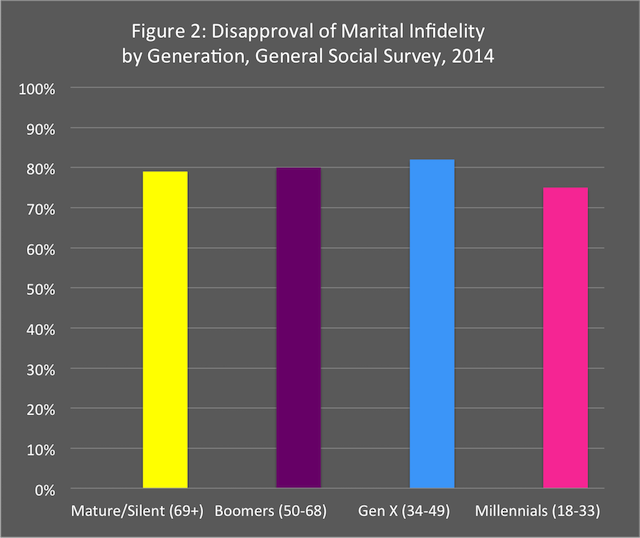 Relatedly, a study published in June 2016 in the Journal of Family Theory and Review examined decades of pornography research in an effort to highlight how pornography use impacts romantic relationships. Kyler Rasmussen of the University of Calgary conducted the systematic literature review of over 600 pornography studies dating back to the 1960s through August 2014, concluding that “that the current literature provides strong evidence regarding pornography’s negative influence on family stability.”

The available data are in strong support of the assertion that individuals exposed to larger amounts of nonviolent pornography evidence an increased acceptance and estimated frequency of extramarital sex relative to controls, and are more likely to believe that promiscuity is natural and that marriage is less desirable.

Because infidelity is one of the most commonly cited reasons for divorce, Rasmussen emphasizes that greater acceptance of infidelity among porn users “may increase the likelihood of divorce.” He cites a study published in 2014 in the Journal of Family and Economic Issues that used data from the GSS on 20,000 ever-married adults to show “consistent correlations between pornography consumption and divorce for all years between 1973 and 2010.” It found that “adults who had watched an X-rated movie in the past year were more likely to be divorced, more likely to have had an extramarital affair, and less likely to report being happy with their marriage or happy overall.”