Are married people more socially isolated? That’s the argument advanced in a new article in The Atlantic by Mandy Len Catron: sure, you gain the company of a spouse, but that comes at the cost of fewer relationships with friends, family, and community. Catron makes her case by drawing on research by sociologists Natalia Sarkisian and Naomi Gerstel, who in turn tapped two different national data sets to show diminished socializing for married Americans compared to their previously-married or never-married peers.

Sarkisian and Gerstel are good scholars, and I don’t find fault with their data analysis. Indeed, my own analysis of the General Social Survey, one of the data sets they used, shows that married couples socialize less, irrespective of whether or not they have children.1 The gap is real, but it’s not huge; indeed, children depress socializing more than marriage does. 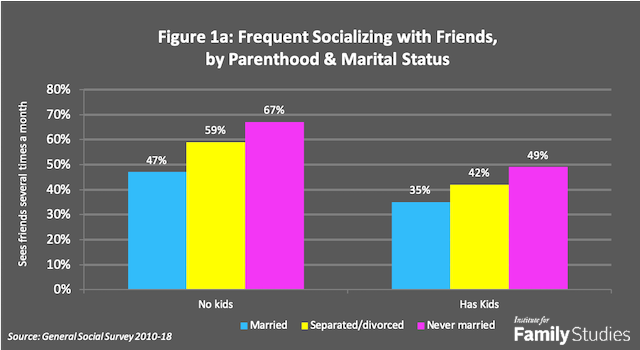 What about the other end of the spectrum, adults who almost never socialize? Here, there aren’t meaningful differences by marital status. 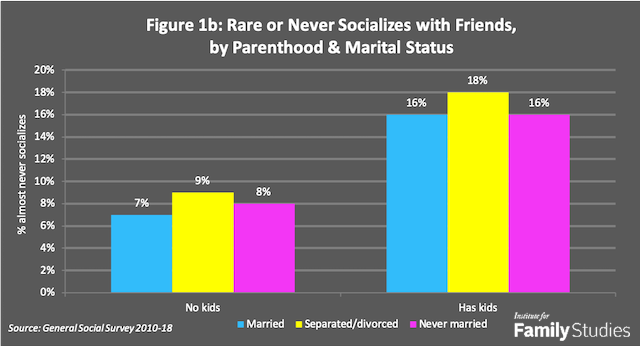 These data don’t suggest that marriage is isolating, as Catron would have us believe, but just responsible for a little less time with friends. And this is only logical—if you can get companionship from the person you live with, you’ll be less likely to seek it outside the home.

Catron’s argument gets considerably weaker when we evaluate other forms of social interaction and civic engagement. GSS data show that married Americans are more likely to volunteer for a charity than their unwed contemporaries (and one can easily imagine that single parents have other priorities beside volunteering).2 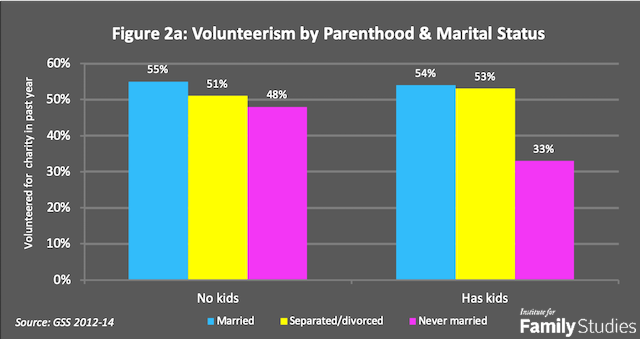 If the sample of GSS data is just divided between married and unmarried respondents, the difference in volunteerism is more apparent: marriage increases the likelihood of doing volunteer work by 10 percentage points.

Married Americans are substantially more likely to darken the door of a church, synagogue, or mosque than are their unwed counterparts.3 Notably, this isn’t just parents trying to instill the habit in their children. 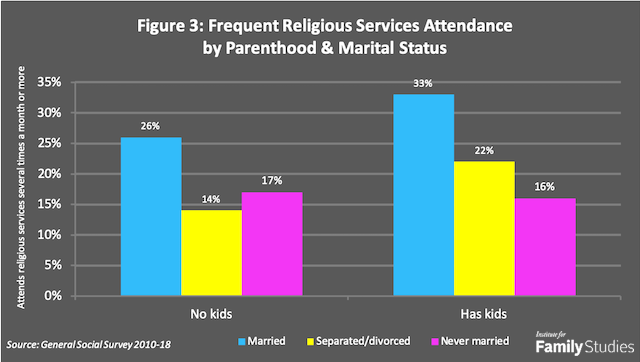 People have many reasons for going to religious services, and one of them is to see their friends. Among people who attend more than a few times a year, 19% say that at least half their friends regularly attend services with them.4 That number jumps to 41% among those who attend several times a month or more. Notably, these numbers aren’t much different for parents and nonparents. Indeed, married childless Americans are 11 percentage points (42% vs. 31%) more likely to have many friends who attend services with them compared to their unwed contemporaries.5 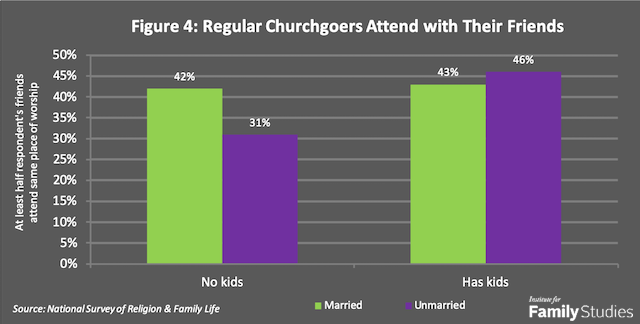 This research brief considers several different forms of civic and community engagement: doing charitable work, attending religious services, and socializing with friends. Married adults are more likely to do volunteer work than are single people. They also attend religious services more frequently, and often share their places of worship with their friends. The only measure of outside engagement they fare less well on is how often they hang out with friends—and it only feels natural that people hang out less with other friends when they’re living with the person presumed to be their best friend.

Mandy Len Catron took a social science finding and ran blindly with it, leading her to come to the wrong conclusions about marriage and community engagement. Indeed, my data suggest that marriage seems broadly beneficial for community engagement. Married folks do spend less time with their friends, but who would expect otherwise?