Loneliness During the COVID-19 Pandemic

The COVID-19 pandemic has disrupted American life in many ways. But one of the most significant disruptions is that the pandemic has left many Americans isolated for long stretches of time. Whether due to legally-enforced lockdowns, or just prudential measures by households to reduce their own risk of infection, American social life has taken a hit this year. One of the most widely-discussed consequences of this isolation is a rise in loneliness: surveys have shown huge rates of reported loneliness, even as experts have warned that loneliness can have health consequences.

But has loneliness really risen in 2020? To answer this question, we can’t just ask how many people are lonely at one point in time; to really measure how loneliness has changed, we need a survey that asks the same questions to the same profile of people over multiple years. The first large, representative survey to do this is the American Family Survey (AFS), which asked a set of questions about loneliness in 2019 and again in 2020. Specifically, it asked how often people felt isolated, felt left out, or felt they lacked companionship. Figure 1 below shows the share of respondents who said they “often” experienced each kind of loneliness in 2019 and 2020. 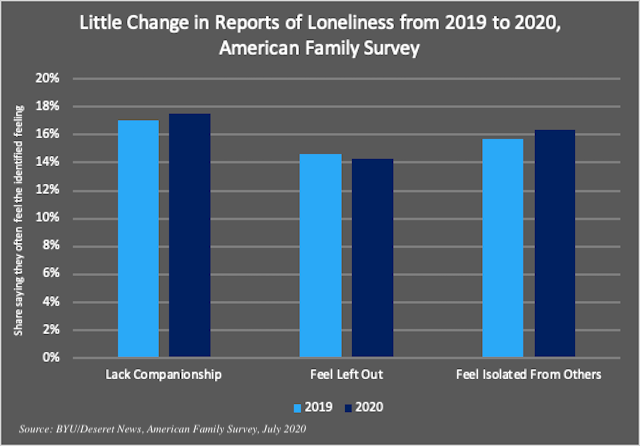 There was actually very little change in loneliness from 2019 to 2020. Despite increased isolation, not much appears to have changed in Americans’ experience of loneliness. Americans were perhaps a bit more likely to feel they lacked companionship or that they were isolated from others, but they were also a bit less likely to say they felt left out.

However, there are important differences in loneliness across groups. To compare how loneliness has changed across groups, I created a “loneliness index” for each of the 3,000 respondents to the American Family Survey. I added up the reported frequency of lonely feelings across the three indicators, with “often” scored as a 3 and “hardly ever” scored as a 1, giving every respondent a score from 3 to 9. Then I subtracted 3, to yield scores from 0 (people who hardly every feel any kind of loneliness) to 6 (for people who often feel all three lonely feelings) for easier comparison. As shown in Figure 2, loneliness scores vary quite a bit by family status. 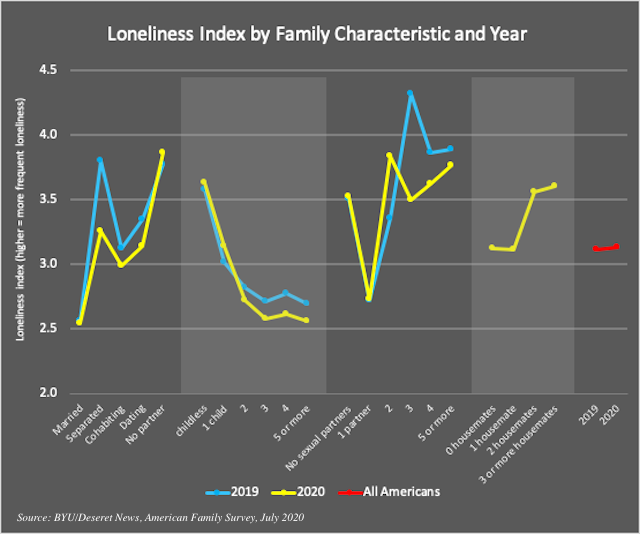 In other words, the least-lonely people were those who were married with kids, and the loneliness gap between those people and childless singles (the loneliest people, by their own reports) grew wider between 2019 and 2020.

Moving beyond family, in terms of sexual partners, the least lonely people were those with precisely one reported sexual partner in the prior two years. In 2019, people with a relatively large number of sexual partners were also the loneliest, but in 2020, the difference between them and those with 3 or less partners declined. The 2019 American Family Survey did not ask about unrelated housemates (or roommates), but the 2020 survey did, and it found that people with more housemates tended to be a bit lonelier. Combined with the lack of correlation between more sexual partners and loneliness, this suggests that the lower reports of loneliness among marrieds or parents is not simply related to having extra people around, but it is specifically related to having family around.

Finally, the economic effects of COVID are also related to loneliness. People who said their financial condition worsened from March to July 2020 had a loneliness index of about 2.5, while among those whose finances improved, the average loneliness index was just 2.1. In a multivariable regression, the effect of worsening financial circumstances on loneliness is bigger than the estimated effect of being married vs. dating or cohabiting, and more influential than having one or two kids vs. being childless. Having worsening finances is twice as influential on loneliness as the estimated effect of having no sexual partners.

Obviously, causality could run either direction on some of these relationships: lonely people might be more likely to be single or childless, rather than singleness itself increasing their loneliness. But it is less likely that loneliness would cause people to have rapidly worsening finances, suggesting that we should not simply assume that causality is some unsolvable question. People who are married are especially unlikely to say they lack companionship, one of the components of my loneliness index, and it’s unlikely that feelings of having adequate companionship would causemarriage (indeed, possibly the opposite is true). Thus, while causality can certainly run either direction in this data, it seems likely that there is a link between unstable economic conditions and elevated loneliness, and between having an intact family and reduced loneliness. And under the isolating conditions of COVID-19, the importance of family in bolstering psychological well-being has only grown.