In Marriage, If You See Something, Say Something

“If you see something, say something” has become a familiar refrain on posters around airports and other high-security areas. Exhortations to call out and warn others of suspicious activity seem to be commonplace since the terror attacks of September 11, 2001; they are emblematic of our “new normal.” It is unclear just how successful this slogan has been in preventing terror attacks but this simple line emphasizes the role each one of us might play in increasing public safety. I wish we had those same posters around our homes. Who knows? That Department of Homeland Security slogan might just be the key to preventing unnecessary divorce.

In my work with couples on the brink of divorce, I am often surprised by just how long people will put up with marital problems before getting to the point that they’re willing to call it quits. In fact, when I ask couples what they’ve done to correct the problems they’ve identified in their marriage, I’m discovering more and more people saying things like, “We haven’t really done anything,” or “I’ve tried to ignore the problems in hopes that things would change.” It seems as if many marriages that end in divorce (unnecessarily) go from wedded bliss, to years of suffering in silence, to divorce, without either partner raising a voice of warning about the suspicious activity that is getting them down in their marriage. If you see something, say something.

Recently, as part of the National Divorce Decision Making Project, some colleagues and I have been investigating what goes through people’s minds when they are considering ending their marriage. We’re still collecting and sifting through the data, but we’re discovering that divorce ideation (thinking about getting a divorce) begins internally; it often happens inside the mind of only one marital partner, and can go on for years before that individual says anything, to anyone. It is understandable that someone might deliberate for a long time on whether or not to end a marriage; there is a lot riding on that decision. But if someone is experiencing problems in their marriage, there is no reason for them to stay silent.

The mind offers a seemingly limitless stage on which to play out what-if scenarios when one is thinking about divorce. When those scenarios stay inside one person’s head, little change can happen in the marriage. Seeing the problems in one’s marriage is just a small part of preventing unnecessary divorce. It’s saying something, to someone, to anyone, that makes a real difference.

We asked people who were considering divorce if they had ever talked to anyone about their thoughts. The number is not as high as one might expect. Less than two-thirds of our participants indicated that they had talked to anyone about their thoughts of divorce. Friends and family members seem to be on the front lines of the disclosures that do happen; marriage professionals and clergy are turned to at lower rates. 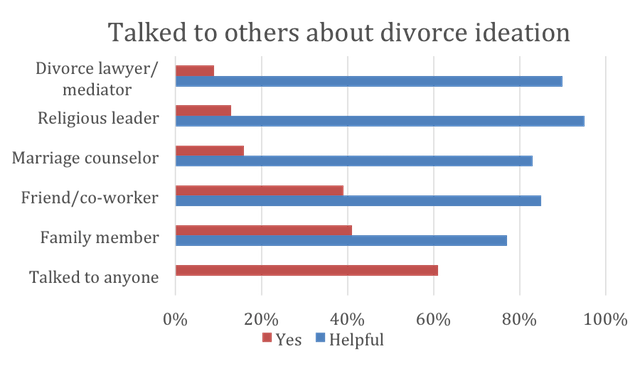 Source: The National Divorce Decision-Making Project. (2015). “What are they thinking? A national survey of married individuals who are thinking about divorce.” Provo, UT: Family Studies Center, Brigham Young University.

One common theme, however, is that respondents overwhelmingly indicated that talking to someone helped. It is interesting to note that while marriage professionals and clergy were less likely to be consulted, respondents who spoke with them were slightly more likely to consider the conversations helpful than respondents who talked to friends or family about their thoughts of divorce.

We also asked participants specifically if they had talked to their spouse about their thoughts of divorce. Just four in ten indicated that they had. Forty percent indicated that they hadn’t and 20 percent told us, “Maybe we sort of talked about it.” People are seeing things, some are saying things, but we have a long way to go before the “see something, say something” adage is working in our marriages.

One year after our initial in-depth interviews with married Americans considering divorce, we contacted our participants to see if or how their situations had changed. We were specifically interested in finding out whether our initial conversation, over a year ago, had any impact on individuals’ thoughts about divorce or their overall marital situation. It was not uncommon to hear answers like “That interview got me thinking more specifically about divorce and whether or not it was something I really wanted. I had been thinking about it, but talking about it, and hearing myself say the words, got me to take action.” Many acted to rid their marriage of the problems they had been stewing over for months, and others reported that the conversation was a bit of a “wake-up call” and moved them to follow through on filing for divorce. Saying something moved these individuals to act.

Seeing the problems in our marriages, especially seeing the problems in or with our spouses, is easy. The part we seem to struggle with is actually talking about them. Getting our marital problems and concerns out in the open can be a real challenge, but it is where the real work of avoiding divorce begins.

Steven M. Harris, Ph.D. LMFT, is Professor of Family Social Science and Director of the Couple and Family Therapy program at the University of Minnesota. He is also the Associate Director of the Minnesota Couples on the Brink Project. All statistics in this post are from “What are they thinking? A national survey of married individuals who are thinking about divorce.”