How the ‘Tax Cuts and Jobs Act’ Affected Low, Middle, and High-Income Families

by Elaine Maag, @ElaineMaag
Back to Blog

Editor’s Note: Skeptics of the 2017 “Tax Cuts and Jobs Act” (TCJA)—like the Institute for Family Studies’ W. Bradford Wilcox—have wondered how much the TCJA really helped middle and working-class families. To find out, we asked Elaine Maag, a scholar at the Urban Institute, to calculate how the 2017 tax law affected typical working-class, middle-class, and upper-class married families with two children. Here is what she found.

Many factors influenced how a family was affected by the "Tax Cuts and Jobs Act" (TCJA), including whether the family was headed by a single parent or married couple, how many children a family had and how old those children were, whether the family itemized deductions prior to the law, and how much income a family had, and, in some cases, the sources of that income. On average, families with children saw their tax bills drop by $2,570, with benefits much higher for those at the top of the income distribution than at the bottom. Untangling how “ordinary families” were affected is a difficult task because ordinary families vary in all these important characteristics.

In order to provide some context on how a low, middle, and high-income married couple with two children fared, we used the Tax Policy Center’s Tax Cuts and Jobs Act Calculator to calculate federal income and payroll taxes, pre and post TCJA. We divided married couples with two children into three groups, and then chose characteristics for our sample family based on the average characteristics held by the majority of people in those three groups. Answers can vary greatly if the characteristics of the taxpayers are altered. Tax calculations are for the tax year 2018, the first year the law was in effect (see figure below).

Low-income Family: We estimated that our low-income family would have earnings of about $36,000 (about 150% of the poverty line) and it would not have been beneficial to itemize their deductions prior to the TCJA. This couple would have seen their taxes before credits rise but benefit more from the child tax credit under the new law, resulting in a net tax reduction of $1,404. 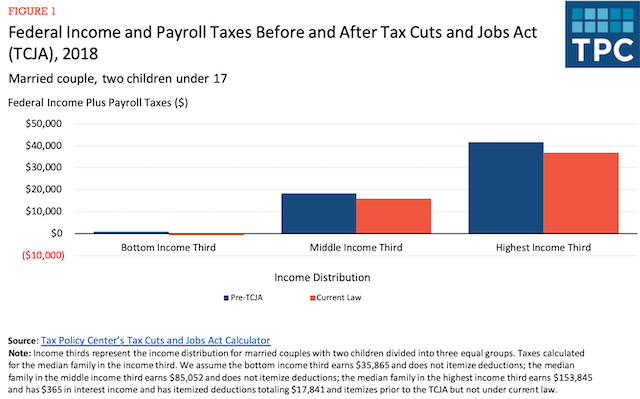 Middle-income Family: The average earner in the middle third of the income distribution earns about $85,000, and most people in this income group do not itemize. This family would see their taxes drop from $18,378 to $15,968, a difference of $2,420. This family also received more in child credits but also benefited from reducing the second and third tax brackets from 15 and 25% by 3 percentage points each. Although the family had more taxable income under the TCJA, they owed less tax on that income.

High-income family: Finally, we estimated our high-income family would earn about $154,000 and have about $400 in interest income. This family would have itemized deductions before the TCJA but under current law, will use the standard deduction instead. The family’s tax would drop from about $41,600 to $36,900—a reduction of about $4,700. This family benefited from receiving the child tax credit, which they were ineligible for prior to the law change, and from lower tax rates. Although the family had more taxable income under the TCJA, they owed less tax on that income.

For additional examples of how families fared, go here.

Elaine Maag is a principal research associate in the Urban-Brookings Tax Policy Center at the Urban Institute, where she studies income support programs for low-income families and children.

Editor's Note: The author has updated Figure 1 with the correct labeling.