Economics has its roots in the Greek word oikonomia, which means the “management of the household.” Yet economists across the ideological spectrum have paid little attention to the links between household family structure and the macroeconomic outcomes of nations, states, and societies. This is a major oversight because, as a new report from the Institute for Family Studies and the American Enterprise Institute shows, marriage and family patterns are important factors in states’ economic performance.

The report, Strong Families, Prosperous States: Do Healthy Families Affect the Wealth of States?, was authored by W. Bradford Wilcox, Joseph Price, and Robert I. Lerman. In it they show that higher levels of marriage, and especially higher levels of married-parent families, are strongly associated with more economic growth, more economic mobility, less child poverty, and higher median family income at the state level in the United States.

In fact, in a comparison between the 10 states where parents of children under 18 are most likely to be married and the 10 states where parents are least likely to be married, Wilcox and colleagues discovered that being in the top quintile is associated with a $1,451 boost in per capita GDP, 10.5 percent greater upward income mobility for children from lower-income families, a 13.2 percent decline in the child poverty rate, and a $3,654 higher median family income. These estimates are based on models that control for a range of factors—from states’ demographic characteristics to its tax policies and spending on education—that might otherwise confound the family-economy link at the state level. The figure below illustrates the relationship, for instance, between child poverty and the strength of family life in 30 states across the U.S. 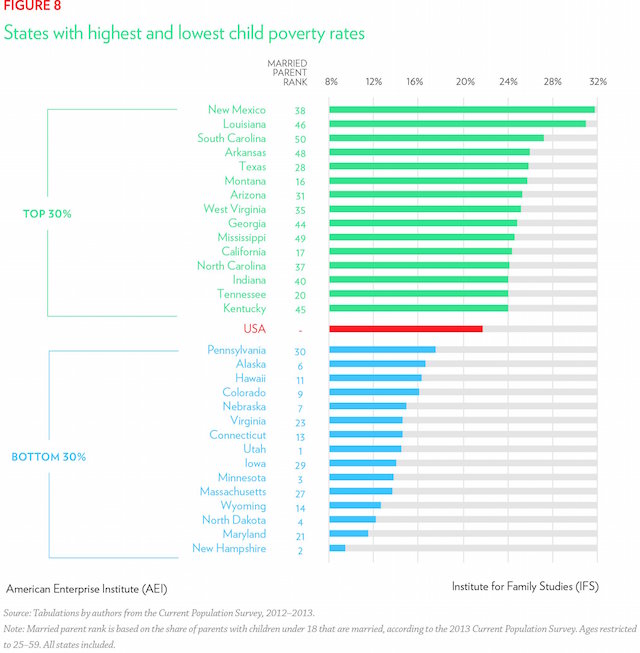 To put those numbers in perspective, the percentage of parents who are married in a given state is typically a stronger predictor of the state’s economic mobility, child poverty, and median family income than are the education level, racial makeup, and age composition of its population.

(1) Labor force participation: Marriage and fatherhood appear to motivate men to work harder, which boosts their family’s income and has ripple effects that benefit the entire economy. Married men work about 400 hours more and make about $16,000 more per year than otherwise similar single men, and they are less likely to quit a job without lining up a new one. The following figure illustrates the connection between family life and men’s participation in the labor market. Married women with children under 18 are less likely to work than their unmarried and/or childless peers; however, at least at the macro level, the economic gains associated with married fatherhood exceed the losses associated with married motherhood.

(2) Household economics: Families headed by married parents benefit from income pooling, economies of scale, and specialization and exchange more than families in unmarried households. Married parents also receive more financial support from their own parents than do cohabiting couples or single parents.

(3) Human capital accumulation: Children raised in intact, married families have access to more income, more parental attention, and more parental affection, and they are less likely to suffer parental abuse or neglect, than children in other types of families. It is not surprising that these childhood benefits pay off down the road: Children of continuously married parents are more likely to graduate from high school, to earn college degrees, and to be gainfully employed as young adults. These patterns at the individual level carry over to the state level. States with a greater share of married parents boast substantially higher graduation rates, even after controlling for states’ median income, race/ethnicity, education level, and age composition, as the figure below shows. To the degree that states succeed in keeping children who have benefited from strong families in their midst within the state as adults, they should reap economic gains. 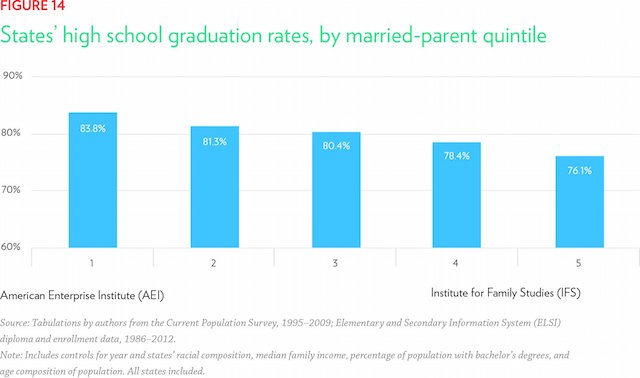 (4) Public safety: Strong families reduce the odds that children—especially males—act out as teenagers and young adults. In general, fathers provide discipline, an extra pair of eyes to monitor children’s behavior, and a model of appropriate male behavior that helps children and young adults steer clear of trouble with the law. The pattern at the family level is again evident at the state level. The link between families and crime rates has implications for the economy: High levels of crime engender significant public-sector costs, inhibit male labor force participation, are associated with less economic mobility for lower-income children, and otherwise serve as a drag on the economy.

Through pathways such as these, strong families help states to prosper and give children a better shot at achieving the American Dream.

This post includes text adapted from Strong Families, Prosperous States: Do Healthy Families Affect the Wealth of States?, a report of the Home Economics Project, which is a research effort of the Institute for Family Studies and the American Enterprise Institute.