by Joseph Price
Back to Blog

But there are two major challenges to interpreting these correlations as evidence that income causes fertility to drop. First, individuals and families with higher incomes often have other characteristics—such as higher education levels, stronger commitment to the labor force, or a preference to live in urban locations—that distinguish them from the general population and might affect their fertility decisions. Second, the observed relationship between income and fertility might simply reflect the effect that fertility decisions have on income (rather than the other way around).

Richer countries have lower fertility rates than poor ones, and high-income families have fewer kids than low-income ones.

The gold standard to solving both of these problems is the use of a randomized experiment, which in this case would entail randomly assigning families to receive extra income and seeing whether those families had more children than families in a control group. Running such an experiment would be too expensive for even the largest research grant. However, natural experiments often arise that approximate the nice features of a randomized experiment by creating a sudden change in family income or wealth that is unrelated to decisions of the family. Two recent papers have identified such natural experiments, and both contradict the assumption that richer people have fewer kids. Rather, in the situations they studied, when families have more money, they have more children.

The first paper1 by Dan Black, Natalia Kolesnikova, Seth Sanders, and Lowell Taylor exploits the increase in world energy prices in the mid-1970s as an exogenous shock to income of individuals living in the Appalachian coal-mining region (including counties from Ohio, Pennsylvania, Kentucky, and West Virginia). They find that the coal boom greatly improved the income of men in coal-rich counties but not the other counties in these same states. Along with their increasing income, the coal-rich counties exhibited an increase in fertility. In fact, they find that a 10% increase in income results in an 8% increase in birth rates.

The figure below shows the difference in the number of children ever born to women born in coal-rich counties compared to women in other counties in the same four states. The figure uses a three-year moving average across birth cohorts. The vertical bars indicate the birth cohorts that correspond to women who were 30 years old at the start of the coal boom or 33 at the start of coal bust, when energy prices fell. 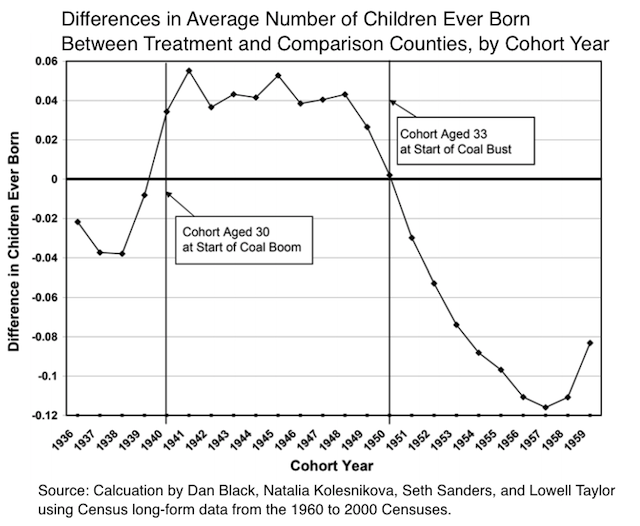 The second paper by Michael Lovenheim and Kevin Mumford exploits the change in wealth brought about by large increases (or decreases) in home values over the last few decades. In 2004, home equity accounted for 84% of household wealth for the median homeowner between the age of 25 and 55, so changes in the value of a family’s home have a very large impact on their net worth. Examining data from 1985 to 2007, Lovenheim and Mumford use short-run home price variation over time within cities as their shock to family wealth. They find that a $100,000 increase in the value of one’s home results in a 16% increase in the probability of having a child.

Both of these studies undermine the common assumption that income decreases fertility. The negative correlation between the two is probably driven largely by a failure to compare similar households (whose only major difference is income) or to account for societal changes that have opposite effects on income and fertility. At a personal level, these results suggest that if your spouse gets that big raise at work or you receive an unexpected windfall, you shouldn’t be too surprised if you end up welcoming a new addition to the family.

Joseph Price is an associate professor of economics at Brigham Young University. He specializes in research related to labor, family, and health economics.