Hey Guys, Put a Ring on It

Marriage is not worth it. It’s not worth the financial sacrifices, the lost sexual opportunities, and the lack of freedom. All in all, it’s a ball and chain—of little benefit to any man interested in pursuing happiness and well-being. This is the view that we’ve encountered from many young men of late.

Take Craig, a 29-year-old guy who saw online a lecture of Wilcox’s on marriage and men. In his words, “I would much rather buy a $75,000 condo by the beach in Florida working 10–20 hours a week with plenty of time and money to relax at the beach, sail, play golf and tennis as well as hang out with friends than marry a 30-year-old woman and take care of her into old age by working 50 hours a week at a job I don’t like.” Craig further stressed that he is in excellent physical condition because he isn’t tied down to a regular 9-to-5 job like most married men.

The fact is, my six-pack abs have gotten me far more sex with high-quality women in their prime than a man’s six-figure income ever will. The sex is passionate and did not require begging like married men often have to do, as the women are physically attracted to me rather then just interested in my ability to provide.

Let’s call him six-pack Craig. His bill of particulars with marriage is long and hyperbolic. But he does a good job of expressing a view that is increasingly popular among a growing number of men: Marriage is of little benefit to the average guy, especially the kind of guy who lives for the hedonistic moment. Indeed, the increased popularity of views like this are probably one reason why the share of young men (aged 20-39) who are married has fallen in recent years as the figure below indicates. 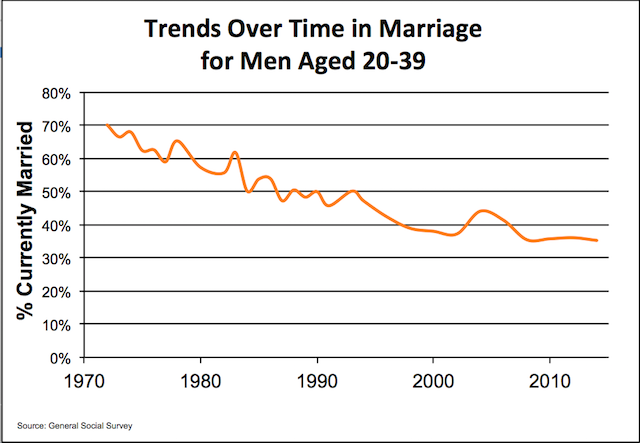 Worth the Sacrifice
Six-pack Craig is right about one thing: There is no doubt that marriage requires sacrifices and lots of them. Successful marriages require men to work harder, avoid cheating, spend less time with friends, and make a good-faith effort, day in and day out, to be emotionally present with their spouses. Many men find these sacrifices hard.

But it turns out that the sacrifices pay for themselves and more. Contrary to the view that marriage is just a ball and chain for guys, the benefits are substantial. Marriage offers substantial returns on men’s investments in money, sex, and health.