For as Long as Our Love Shall Last: How the Soulmate Myth Makes Marriage Less Stable and Less Happy

“Marriage has become more joyful, more loving, and more satisfying for many couples than ever before in history.”

So says Stephanie Coontz, the doyenne of feminist family history, who—as a progressive—is confident the arc of history ultimately bends upwards, towards better and happier families. But there is a price to progress in matrimony, as Coontz tells it: “At the same time [marriage] has become optional and more brittle. These two strands of change cannot be disentangled.”

Coontz’s view here—that more of us are living our best marriages today, in part, because we’ve adapted a more contingent ethic of marital commitment—is common among progressive academics. Take Betsey Stevenson, an economist who served on the Council of Economic Advisors in the Obama administration. She believes in a “hedonic” vision of wedlock, where “marriage is about love and companionship” between partners who can largely concentrate on doing things they like together. Raising children, running a household, establishing a measure of financial security, and giving support to one’s spouse and kin (and receiving it) are not necessarily central to Stevenson’s consumption-centered vision of marriage, where adult desire is the focus (unless you and your spouse find pleasure in one of these activities).

Like Coontz, Stevenson seems fine with casting aside classic ideals of marital commitment. “People should think about how they define [marital] success,” she says. "Is it never divorcing, or 30 years of marriage in which most are pretty good but after 30 years you decide to go in a different direction? I think it’s a hard question, particularly when there’s a lot of longevity."

Her idea of “love and companionship” in marriage, I guess, does not necessarily include being there for your husband or wife when dementia, disability, or decline looms on the horizon. After all, to Stevenson, marriage is about “consumption complementarities,” which she describes as “activities that are… more enjoyable when shared with a spouse.”

So, if you’re not feeling it, you should feel free to go in a “different direction.”

Their approach to marriage is largely consistent with what I call a soulmate model of marriage, one that assumes that marriage is primarily about “an intense romantic or emotional connection that should last only as long as it remains happy, fulfilling, and lifegiving to the self.”

Three corollaries follow from the kind of thinking promoted by Coontz:

Well, Coontz is right about one thing. Taking a more contingent approach to marital commitment is indeed linked to a higher risk of divorce. Both historically, and today, we can see that divorce is more common among societies and for individuals who take the view that marriages should only last for as long as matrimony brings happiness, fulfillment, or self actualization. 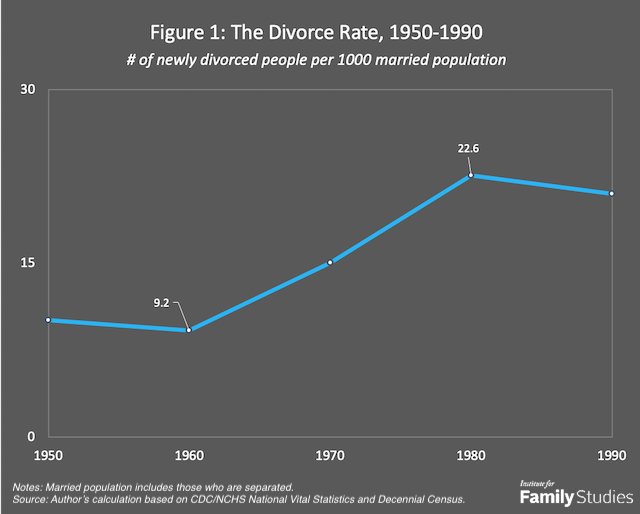 As Figure 1 indicates, in the 1960s and 1970s, when many Americans abandoned an ethic of marital permanence, the divorce rate more than doubled, from 9.2 divorces in 1960 to 22.6 divorces per 1,000 married people in 1980. And today, one recent survey of California families found that married men and women who endorse the view that “I’m in this marriage so long as our love lasts” are about 50% more likely to think that their marriage may end in divorce, compared to husbands and wives who take the view that “divorce is not an option.” No real surprises here.

But what about the belief that less commitment and more divorce make for higher marital quality in the marriages that remain? That making “marriage itself more optional and more contingent” increases the odds of marital bliss for those lucky enough to find and keep a spouse today?

If you look at the historical record right around the divorce revolution, recent survey data, and research following husbands and wives over time, the evidence doesn’t bear out for two Coontz corollaries. 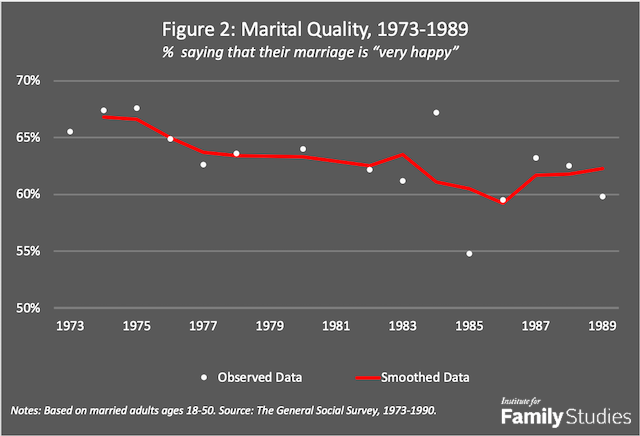 What happened during the divorce revolution of the 1970s and in its immediate wake is that average marital quality in the United States actually fell from the early ‘70s through the late ‘80s, as Figure 2 indicates. About 67% of husbands and wives were “very happy” about their marriage in the early 1970s, but only about 62% of them were very happy by the late-1980s, according to the General Social Survey. Thus, both husbands and wives saw their odds of being very happy drop by about 5 percentage points in this period.

What is especially striking about this decline in marital quality is that, according to progressive logic, marital quality should have improved in the 1970s as fewer and fewer Americans married and many supposedly subpar marriages were dissolved. Based on this line of thought, the remaining marriages, the cream of the marital crop, should have trended in a markedly happier direction. But instead, reports of marital happiness fell during the “Me Decade” and in its immediate wake.

What proponents of the progressive view did not really anticipate is this: if your parents, best friend, and sister all get divorced, your confidence in your own marriage is likely to take a hit. That’s because how we think about and approach our own union is deeply affected by what we see happening in the marriages of our friends and family members. Worries about the future of your own marriage, in turn, reduce your sense of emotional security, willingness to invest in your relationship, and happiness in your own marriage.1

In other words, the divorce revolution cast a cloud of uncertainty over many marriages in an era when marital stability and marital commitment fell like a rock. And, consequently, marital happiness also fell for ordinary couples, even though fewer were marrying and more were divorcing. This is just the opposite of what Coontz would predict.

This very same dynamic plays out today among ordinary husbands and wives. When Wendy Wang of the Institute for Family Studies and I looked at married men and women’s attitudes in California, we found that the couples who said that divorce is not an option for them were more likely to say that they were satisfied in their marriages compared to those husbands and wives who said that “I’m in this marriage so long as our love lasts.” 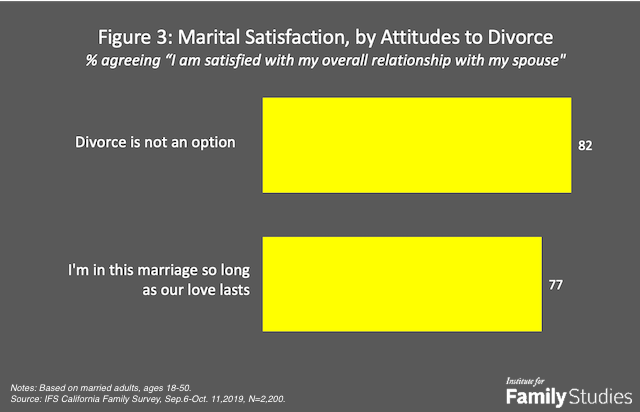 Specifically, as Figure 3 shows, 82% of those who embrace an ethic of marital permanence report being satisfied in their marriages, compared to 77% of those who take the more contingent view. We find a similar pattern in the General Social Survey: those who take a more permissive view of divorce laws are significantly less likely to report that they are very happy in their marriage, compared to those who believe that divorce should be more difficult.2 Obviously, we cannot make strongly causal claims with this data, given that men and women in happier marriages may be more likely to embrace an ethic of marital permanence.

But research tracking more than a thousand husbands and wives over time by sociologists Paul Amato and Stacy Rogers is more conclusive. In observing them over time, Amato and Rogers found that:

Why? In most marriages, knowing that you and your spouse are deeply committed to one another, come what may, fosters many other marital goods: more trust, more emotional security, more mutually beneficial investments in one another and the marriage—both financially and emotionally—more fidelity, and a clearer vision for a joint future. All of which translate, for the average couple, into higher levels of marital quality, especially compared to couples who do not share a commitment to marriage ‘til death do us part.3

Being committed for the long-term has a powerful influence on husbands’ and wives’ willingness to serve the best interest of the couple rather than the short-term interest of the self. As the psychologist Scott Stanley has noted, an important benefit of having a long-term view in marriage is that the relationship is evaluated on the basis of a shared past and a shared future, rather than only on the basis of what happens in the here and now. Because few relationships are continuously satisfying, a here-and-now focus puts great pressure on the current exchange of positives and negatives in your marriage as the basis for evaluating the relationship. When you are confident that your marriage will endure, Stanley observes, you are more likely to behave in ways that do not always benefit yourself immediately but enhance the long-term quality of the relationship. That is, you are more likely to approach your marriage in a spirit of generosity and, in so doing, maximize the long-term happiness of your spouse.4

Coontz apparently understands none of this. She’s under the illusion that marriage in recent decades has become both “more fulfilling” and “more effective in fostering the well-being of both adults and children than ever before in history.” This is because, for her, “fulfilling and fragile seem to ‘go together like a horse and carriage’” in marriage, as she wrote in her book, Marriage, a History.

Alas, Coontz is wrong on both counts: there is no evidence that ordinary marriages were made more fulfilling by the growing fragility of our unions in the 1970s, or that husbands and wives who take her contingent view of married life are happier today. That’s because, in the real world, it’s actually commitment and contentment that seem to “go together like a horse and carriage” in marriage.

W. Bradford Wilcox, professor of sociology at the University of Virginia, is a senior fellow of the Institute for Family Studies and a visiting scholar at the American Enterprise Institute.

2. Married adults who believed that “divorce in this country should be easier than it is now” are 22% less likely than those who believed that divorce should be more difficult to report that they were very happy in their marriage, controlling for education, household income, race, age and gender. Results based on a logistic regression predicting the odds of married adults being “very happy” in their marriage, using General Social Survey, 2010-2018.