Faith: An Overlooked Tool in Substance Abuse Prevention and Recovery

by Brian Grim
Back to Blog

There are 20 million Americans afflicted with a substance use disorder (SUD). And tragically, each year, nearly 160,000 die from alcohol or drug-related deaths. However, as we head further into the 30th annual National Recovery Month, one of the most effective tools to prevent and/or recover from addiction is often overlooked—faith. And when it comes to prevention, particularly among youth, faith is a driving force, according to a new report I co-authored with my daughter, Melissa, which was published in the Journal of Religion and Health. The report is the second commissioned by the interdenominational initiative, Faith Counts to examine the socio-economic contribution of religion to America. 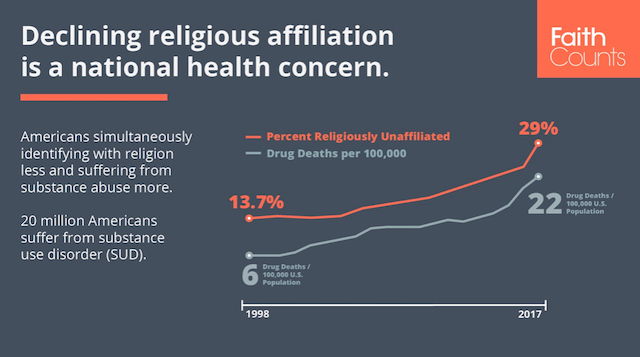 Unfortunately, most Americans will find this surprising. In the latest Gallup survey, only 46% of Americans think that religion can answer today’s problems, but the reality is that religion provides answers for one of today’s biggest problems—addiction. Part of the misperception revealed in the poll is that fewer people are affiliated with religion today, resulting in less experience with faith and its positive impacts.

So, what are the positive impacts of religion on substance abuse/addiction that are outlined in the new study?

A host of empirical studies also reveal that faith among adolescents and young adults can act as a powerful deterrent against drug and alcohol abuse, even when controlling for other contributory factors (e.g., depression). Higher degrees of religiosity among youth, including religious attendance, involvement, and reliance on religious beliefs in decision-making, are associated with several benefits, such as limited depression and negative attitudes toward substance abuse. Adolescents who frequently attend religious services, who are involved in faith-based activities, and who place a high value on spirituality exhibit greater resilience when facing the stressors that can lead to the formative use of drugs and alcohol as a coping mechanism.

Studies also show that high school students’ attendance in religious services and their incorporation of prayer into their everyday lives can equip them with vital spiritual and moral guidance that will decrease their inclinations for drugs and alcohol when stressors arise.

Adolescents also benefit from their mothers’ higher levels of religious practice, controlling for factors that also influence the level of drinking (e.g., the adolescents’ peer associations). Higher teenage religiosity is also related to other factors related to a decrease in drug use, such as good family relations, high academic performance in school, having anti-drug attitudes, and socializing with friends who do not take drugs. Moreover, teens themselves tend to cite their peers’ religious and spiritual inclinations as reasons that discourage their peers from drinking and taking drugs.

Our study concludes that the decline in religious affiliation presents a growing national health concern because the growth of disaffiliation is concentrated among Millennials and young adults, who are also the highest percentage of any age group to have a substance abuse disorder. In a sense, the antidote is being rejected by the very people who need it most.

Brian Grim is a non-resident research scholar at the Institute for Studies of Religion at Baylor University and president at the Religious Freedom & Business Foundation. He previously was director of cross-national data at the Pew Research Center and a program director at universities in China, the former USSR, and the Middle East.

Deaths of Despair and COVID-19: What We Know So Far

Fulton v. Philadelphia: The Future of Church-State Cooperation in the Social Welfare Arena