by Jeffrey Dew Matthew Saxey Jolyn Schraedel
Back to Blog

Earlier this year, megachurch pastor Carl Lentz was fired due to “moral failures.” Lentz took to Instagram to clarify that he was unfaithful to his wife. This pastor’s infidelity is not the first time, religious or nonreligious, someone famous has cheated on a spouse—and will not be the last.

Given most world religions’ prescriptions on marital fidelity, Lentz’s behavior begs the question of whether religiosity, which we define as feeling that religion is an important aspect of one’s life,1 actually helps to prevent infidelity. Research generally suggests a negative relationship between religiosity and infidelity; as one is more religious, his or her likelihood of infidelity decreases, and vice versa.2 However, researchers have paid less attention to the reasons why religion and marital infidelity are negatively associated.

According to the General Social Survey (GSS), even today, most Americans believe that cheating on a spouse is wrong.3 As a society, we idealize marriage as a faithful, long-term, committed relationships (even if we do not live up to the ideal). To make real life marriages more like the ideal, understanding behaviors associated with marital infidelity is an important first step. Our study examined two factors that may make it less likely that religious4 individuals engage in extramarital affairs, including preventing behaviors that lead to affairs and religion- enhancing relationship satisfaction.

One of the ways in which religiosity may reduce the likelihood of extramarital affairs is by reducing those behaviors that may escalate into full blown sexual infidelity. Extramarital affairs rarely occur in a day but progress over time—extramarital sexual behavior often starts with instances of “lesser” relationship infidelity that are not necessarily sexual in nature.5 This could include things like following an ex-partner on social media,6 flirting with someone in real life,7 and online pornography consumption.8 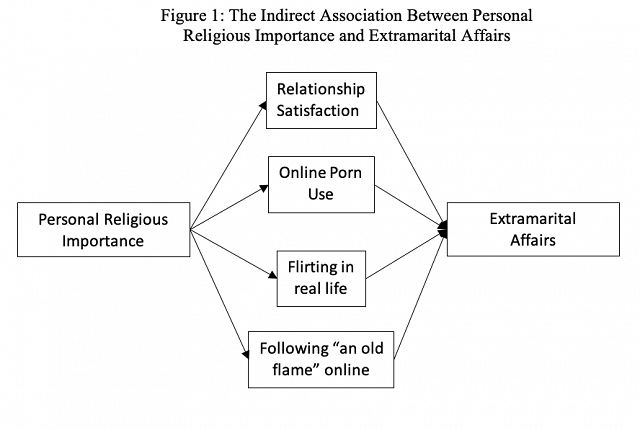 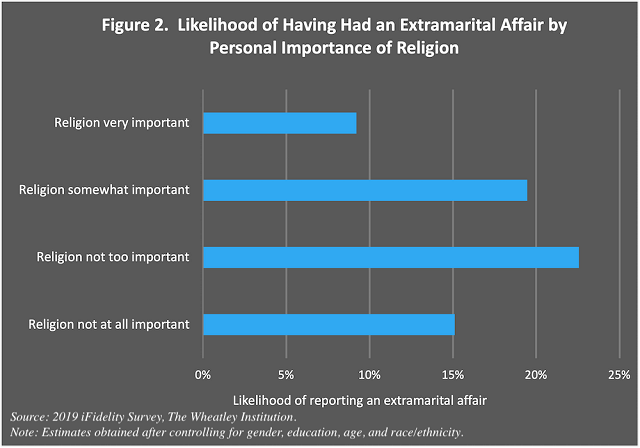 In addition to testing whether religiosity and extramarital affairs were associated, we also tested factors that explain whythey relate. As noted above (Figure 1), we tested three types of “lesser” cheating (i.e., flirting, using online pornography, and following an old flame online) and marital satisfaction as potential mechanisms that might link religion and affairs.

The results from our analysis allowed us to calculate the percent of the indirect effect each of the different mediator variables shown in Figure 1. Together, flirting in real life and online pornography use explained 85% of the indirect effect between religiosity and reports of extramarital affairs (Figure 3). These two variables were statistically significant in our model.  Relationship satisfaction and following an old flame online were not statistically significant.

Figure 3 suggests that one of the main ways in which religion may prevent extramarital affairs is by preventing individuals from flirting with a member of the opposite sex (i.e., who is not their spouse) in the first place. Given that flirting often signals romantic and/or sexual interest to a potential partner, religion might “build a wall” around marital fidelity by reducing this activity. Religion might also make infidelity less likely by reducing individuals’ use of pornography—an activity that research has been shown to be associated with extramarital affairs. 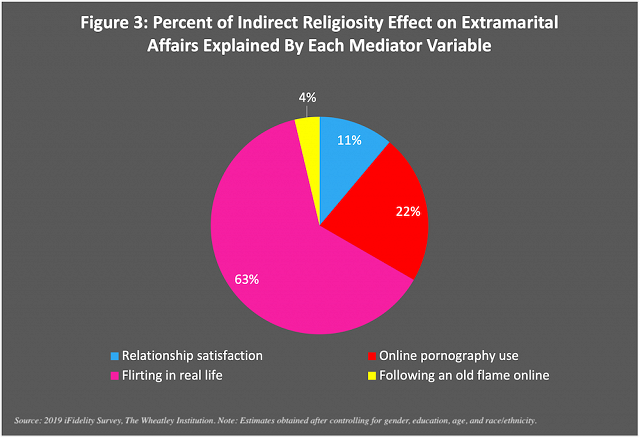 These data suggest that avoiding flirtation in real life with anyone other than a spouse and avoiding pornography use can be meaningful ways to avoid infidelity. Further, the findings also suggest that the more personally religious individuals are, the more likely they are to avoid even these “minor indiscretions.”

1. Religiosity is a multi-faceted construct with religious worship service attendance, denominational affiliation, and integration within one’s religious community all playing a role. We focus on this one issue – personal religious importance – because we believe it is most associated with extramarital affairs.