Conservatives: Happier at Home, Worried for the Nation

They are the group most worried about American families, but when it comes to their own families, conservatives have an edge over others. More than half of conservatives say they are completely satisfied with their family life, compared with about 4 in 10 of liberals or moderates, according to the new American Family Survey conducted by YouGov. 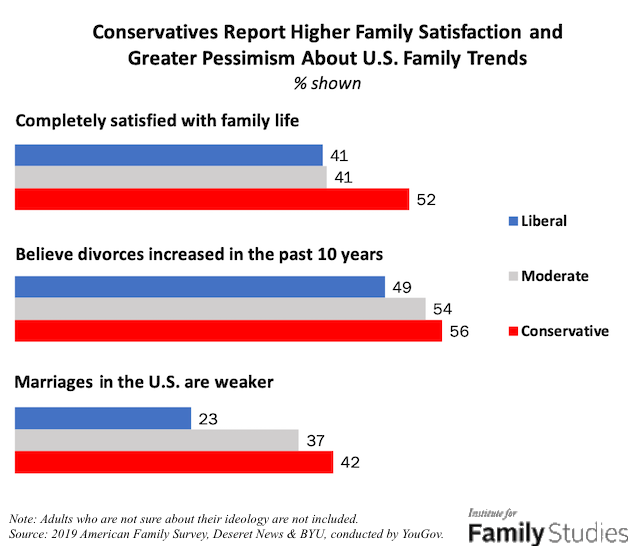 Conservatives are also more concerned about the health of marriages in the United States. For example, more than 4 in 10 conservatives report that marriages in the U.S. are weaker now than they were about two years ago. In contrast, a much smaller share of liberals (23%) say this is the case.

Marriage is highly valued by conservatives. A vast majority (80%) of American conservatives believe that marriage is needed to create strong families, while only 1 in 3 liberals and half of moderates agree. Not surprisingly, conservatives (62%) are much more likely than liberals (39%) or moderates (46%) to be married. In fact, in a multivariate model with standard controls, ideology is about as predictive of who is married in America as is education. That’s noteworthy because so much of our discussion about America’s marriage divide focuses on class, not culture. 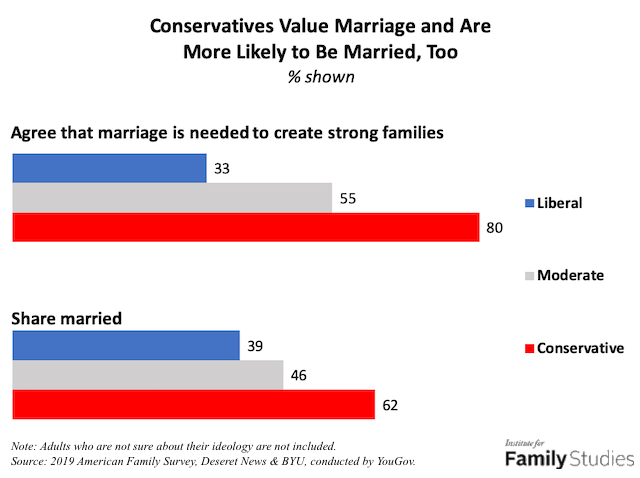 Conservatives’ higher family satisfaction can be partly attributed to the fact they are more likely than others to be married (and married people are generally more satisfied with their family life). Other factors, such as religion, may also play a role. In a regression model that includes religious service attendance, family income, marital status, age, education, and race/ethnicity, we find that being a conservative (vs. a non-conservative) increases the odds of being “completely satisfied with family life” by 23%, net of these other factors. With similar controls, we also find that married men and women who agree that “marriage is needed to create strong families” have 67% greater odds of being completely satisfied with family life, compared to other married men and women.

The new American Family Survey, then, tells us that the very Americans—conservatives—who are most pessimistic about American families are themselves the most likely to report having happy families. This can be partly explained by the fact that conservatives are significantly more likely to be married and to accord marriage greater significance compared to other Americans. It may also be because they are more likely to erect boundaries against messages, values, and norms in the larger culture that they deem to be corrosive of family life. And these worries, in turn, appear to be connected to their pessimistic views about the trajectory of family life in the nation at large.