Amazon recently announced its decision to make New York City and Northern Virginia/D.C. the home of its long-awaited second headquarters. With potentially 50,000 new jobs in the already highly-congested two metro areas, Amazon’s choice has raised eyebrows. Yet Amazon’s move may help to balance the sex ratio in these two areas and have potential benefits on marriage formation.

A whopping 67% of adults ages 25 to 40 in Washington, D.C., have never been married, according to IFS’s new analysis of the 2017 American Community Survey. And the city has a skewed sex ratio among the never-married adults in this age group: for every 100 never-married women, there are only 92 never-married men. 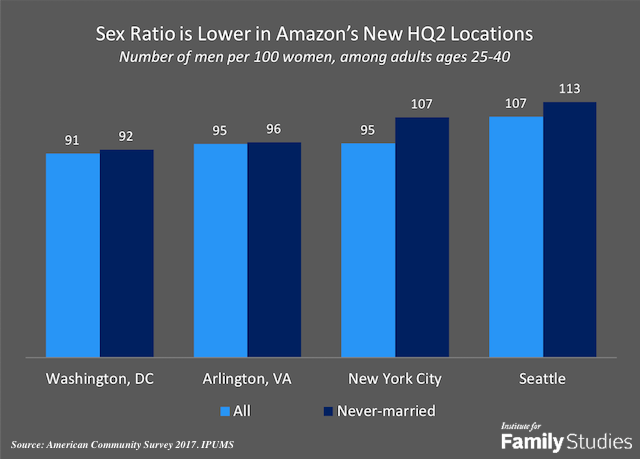 The patterns in Northern Virginia and New York city are similar. A majority of adults ages 40 and younger in these two areas has never been married (56% and 58%, respectively), much higher than the national average of 44%. Overall, Northern Virginia and New York City also have a shortage of men in this age group. The exception is that among never-married adults in NYC, the sex ratio favors women: 107 men for 100 women.

On the west coast, the sex ratio is skewed in another direction. In Seattle, where Amazon’s headquarters is located, there is a surplus of men. The overall male-to-female ratio is 107:100 among adults ages 25 to 40. And the ratio is even higher among those who have never been married: for every 100 women ages 25 to 40, there are 113 men.

The four areas that involve Amazon’s current and future headquarters have one thing in common: a highly educated workforce. A vast majority of adults ages 25 to 40 in Arlington (83%) are college-educated, so are about 70% in D.C., and about 50% in NYC (the national average is 36%).  And in Seattle, 71% of the adults in this age range are college-educated. 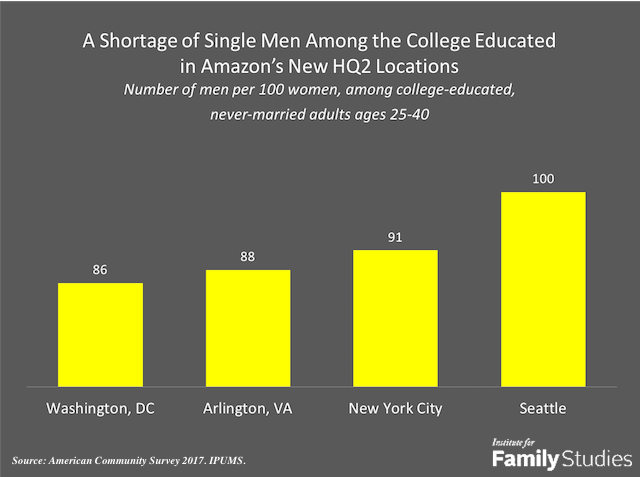 At this point, we don’t know the sex ratio of Amazon’s new hires in the HQ2. But as of now, Amazon’s workforce is largely made up of males. And with Amazon’s move, more tech companies may also move to the two metro areas.

Could a potentially more balanced sex ratio help with marriage formation in D.C. and NYC? For marriages of opposite-sex couples, possibly.

Judging by the newlyweds in these four locations, Seattle has an edge over the others. The marriage rate (measured by the number of adults married in the past 12 months per 1,000 unmarried adults) is higher in Seattle than in the other three areas. Among adults ages 25 to 40 in 2017, there were 82 newlyweds per 1,000 unmarried adults in Seattle, compared with 62 per 1,000 in D.C. and 63 per 1,000 in NYC.  And Seattle has a much more balanced sex ratio than the other areas. 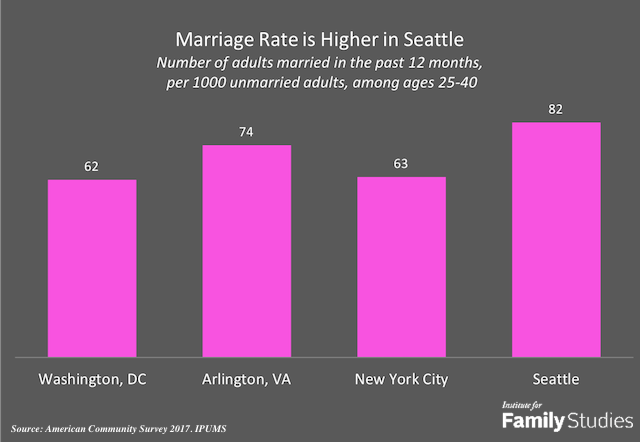 Correlation does not suggest causation, and there are many other factors involved in young adults’ marriage formation decisions. Nevertheless, when there are more men with high-paying jobs on the marriage market, as is the case with Amazon employees, it just might help.

Wendy Wang is director of research at the Institute for Family Studies and a former senior researcher at Pew Research Center.

In Defense of Housework

by John A. Cuddeback
Work-Family