A Snapshot of Millennial Births

by Samuel Sturgeon
Back to Blog

Several news stories have covered the delay in childbearing among Millennials (see here, here, and here). Some Baby Boomer parents even wonder when or if they will have grandchildren. It is true that Millennials are on track to have fewer children than previous generations and fertility rates are currently at an all-time low.  Moreover, Millennials are indeed waiting longer to become parents, and the average age at first birth has risen by more than two full years in the past two decades. However, despite these delays, Millennial women continue to have babies, and more than half of the children that will eventually be born to Millennial women are already here.

There are about 40 million Millennial women in the United States (defined as those born between 1981 and 1998.)1 Across their lifespan, these women will give birth to approximately 75 million children. The first Millennials gave birth at age 10 in 1991, while the last Millennials will give birth in their early fifties, sometime around 2050 (assuming there are no major advancements in reproductive technologies that allow women to give birth at much older ages). However, these ages represent the extreme edges of the reproductive years. 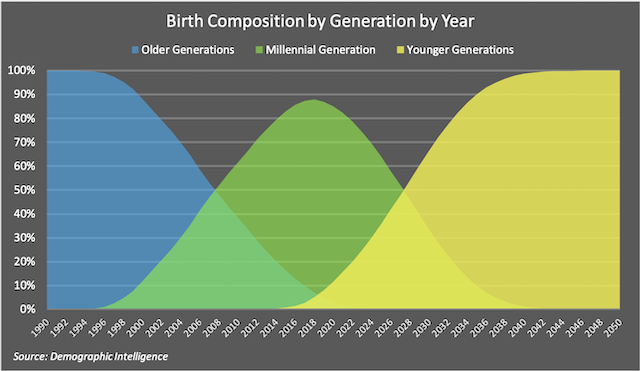 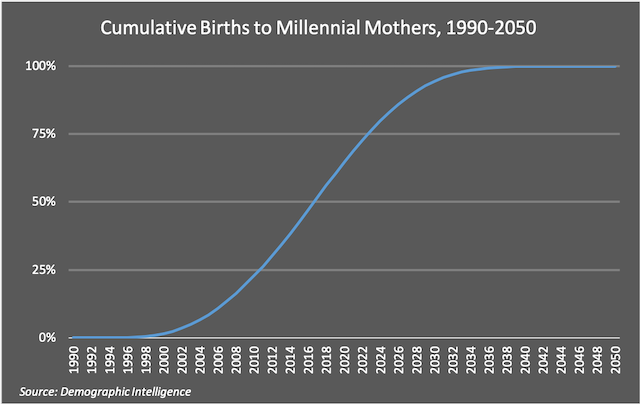 The largest cohorts of Millennial women are currently in their peak childbearing years (ages 25-34).  However, all peaks eventually turn to valleys, and we estimate that Millennial women are now on the downhill slope of that peak. Even though the younger generation only gave birth to about 5% of all children in 2018, their numbers will grow and they will slowly begin to overtake Millennials. That means, according to our estimates, that 10 years from now, in 2028, more than half of all births will occur to women younger than the youngest Millennials.

Samuel Sturgeon is president of Demographic Intelligence, a full-service demographic consulting firm that specializes in fertility and marriage projections.

1. There is no standard definition of what birth cohorts are considered to be part of the Millennial generation. Depending on the report you read, Millennials could be born as early as 1977 and as late as 2005. Pew and others have tried to standardize the years, but as of yet there is no consensus. The most common starting year is 1981, so we have chosen to use that as our starting year. For the ending year, 1996 (Pew) and 2000 (several others) seem to both be popular choices. For this report, we elected to split the difference and choose 1998 as the final year for Millennials.