A Profile of the Taiwanese Family

by James C.T. Hsueh
Back to Blog

As in much of the rest of the world, the Taiwanese family is changing. Taiwan has experienced rapidly declining birth rates since 1950. For example, the total fertility rate (TFR) was 7 in the early 1950s, and fell to replacement level of 2.1 in 1984, and it continuously decreased to around 1 in this century to reach the lowest level in the world since 2003. On the other hand, the life expectancy for Taiwanese is 80.2 years, exceeding that of the average in developed countries, including the United States. The expanding life span is significant compared to a century ago when it was less than age 40.

Declining births and increasing life spans have resulted in the population aging, and the aging rate will continue to accelerate in the coming years. For instance, people age 65 and above accounted for 12.5 percent of our population in 2015. The share will rise to 20 percent by 2026 and to 40 percent by 2060, according to the projection of the Taiwan Directorate General of Budget, Accounting, and Statistics.

In particular, Baby Boomers in Taiwan, the cohort born between 1950 and 1966, accounted for 26 percent of the current total population (23.5 million). Taiwanese Baby Boomers are continuously reaching retirement age, which increases the burden of elder care for both the family and the government. According to the DGBAS, the time frame from aged society (in 2018) to super-aged society (in 2026) in Taiwan is projected at less than 8 years, an unprecedented rate in the world.

Furthermore, Taiwan is undergoing changes in marriage patterns and family structure mainly due to demographic changes. Between 1950 to 1980, statistics showed a significant increase in the number of newly-married couples. This was primarily due to the large number of Baby Boomers in the marriageable age range. For the next two decades, the number of newly-married couples stayed around 150,000 until 2004. Meanwhile, the number of divorced couples has been increasing for the past 30 years. In 1981, for example, 14,897 couples were divorced, and that number surged to 38,986 couples in 1997, which marked the beginning of the upward trend. During the global financial crisis in 2009, only 116,392 couples registered for marriage, but the number of couples registered for divorce still reached 57,227. The ratio of divorced couples to newly married couples came to approximately 1:2. In 2011, although the number of registered marriages increased to 165,323, the number of registered divorce still reached 57,008 couples. In recent years, the ratio remained at l:3 and crude marriage rate was around 2.5 per thousand, higher than the average of OECD countries.

Although birth rates are low, and death rates are even lower, the size of the total population is still increasing. However, the downturn point was projected to be around 2020. Along with the demographic changes and the vulnerability of marriage, the family structure in Taiwan is becoming smaller in size and diversified in living arrangements.

Figure 1 indicates the change of living arrangement in this century in Taiwan. First, the total number of households increased over time although the total population did not increase as much. Second, the nuclear family comprised the largest share but has waned over time (47.9% to 37.3%). Third, the traditional stem family (where three or more direct lineages cohabit) was still important but declining in share (15.2% to 14%). Fourth, the smaller-sized households, such as single (10.8% to 11.9%) and couple-only (12.5% to 17.9%), are increasing. Finally, unconventional family forms, such as one-parent families and grandparents with children (atavistic), have increased in quantity, although they take up a smaller proportion. 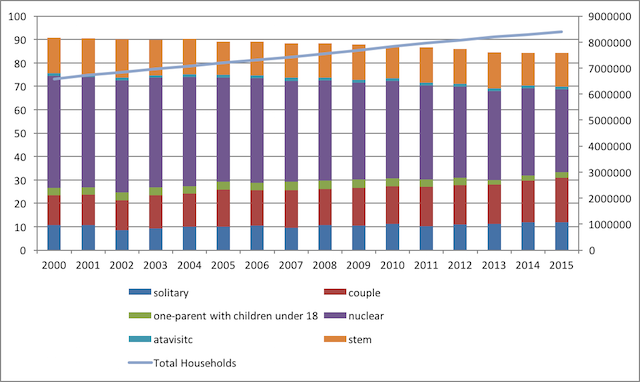 It worth noting that in the traditional Taiwanese society, there were indeed one-parent families, but these mainly resulted from the early death of one of the spouses. One-parent families did not become a significant event until the rise of divorce in Taiwan after 1990. The proportion rose in the next decade but remained stable in the recent decade mainly due to declining birth rates and the divorce of young couples, who are the most likely to experience divorce among age cohorts.

With the rapid changes in population and the family, Taiwan is now facing several challenges. One challenge is a declining number of students, which has resulted in a surplus of universities and schools. At the same time, the retirement population is increasing, causing a financial crisis of pension systems and the need for long-term elder care. Finally, the decreasing working-age population and the aging of the labor force will harm economic development in Taiwan.

James C.T. Hsueh is a professor in the Department of Sociology at National Taiwan University.