Why is Divorce Declining in the UK?

Last week, the UK Office for National Statistics released the latest annual statistics on divorce. In 2017, divorce rates—which they define as the number of divorces per 1,000 married couples—were down by 5%, reversing a rise in divorce rates in 2016.

In reporting this, the UK media usually cite a selection of lawyers and therapists who try to explain why the economy or “fiscal austerity” or Brexit is responsible for the rise or fall of divorce. Sometimes, these “explanations” can be delightfully contradictory.

The key problem is that trying to form any useful conclusions from this year of divorce method of reporting data is a mugs game. It tells us little about underlying trends.

To understand the trend, we need to find out what is happening to married couples by year of marriage. Only then can we draw sensible conclusions.

Thankfully, we are blessed with extremely detailed data in the UK. Each year, we are told how many couples divorced after one year, two years, three years of marriage, etc. We are also told the number of wives and husbands filing, and we also know their previous marital status.

Here are some highlights: 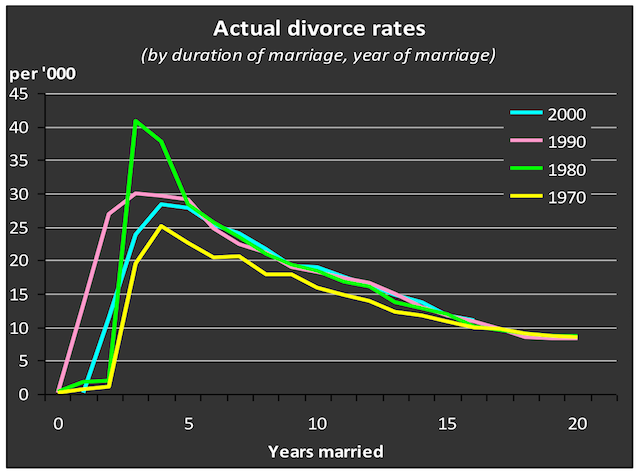 These big conclusions—that the variation in divorce rates is entirely dependent on how many wives file for divorce in the first decade and that divorce rates thereafter follow a well-worn consistent path—now need a decent explanation.

First, I find it deeply reassuring that after couples have survived the first decade, marriage is marriage. The huge social changes of the past 50 years—the sexual revolution, birth control, cohabitation, the Internet, economic, political, legal, and cultural upheavals—have had little-to-no effect on most marriages.

Second, any explanation for why change happens in the first decade needs to explain the very strong gender effect. The rate at which husbands file for divorce has barely changed over any duration of marriage for 50 years. So why did ever more women file for divorce during the 1970s and 1980s, and why did fewer women file from the 1990s until today?

For me, the most plausible explanation boils down to commitment. Men's commitment has so much more to do with “sliding and deciding” than it has for women. As the cohabitation boom took off here during the 1970s and 1980s, so did the proportion of men who moved from cohabitation to marriage without clearly “deciding.” As ever more “sliders” got married without ever fully buying in, hence ever more early divorces were initiated by unhappy wives.

Today, the situation is very different. Attitudes about marriage have softened. So as fewer men hear family and friends putting subtle pressure on them to marry—"When are you going to tie the knot /make an honest woman of her / do the decent thing?”—so fewer men “slide” into marriage. Those who do marry are “deciders” who really mean it. Hence, the big fall off in divorces initiated by wives.

Of course, the problem remains that when most of the general public thinks about the failure of a relationship, they still ignore the much higher break-up rates among unmarried cohabiting couples because it's so much harder to measure and report.

But at some stage, this good news story about the success of modern marriages will filter through into the public consciousness. And maybe then the tide will turn back towards marriage.