Why Has Married Sex Declined?

Americans are having notably less sex these days, according to psychologists Jean Twenge, Jean M. Ryne Sherman, and Brooke Wells. The average adult in the 2010s has sex about nine fewer times a year than he or she would have had in the late 1990s. About two-thirds of this decline reflects the decreasing likelihood of being married (contrary to stereotypes, married people get it on more). The other third reflects a more surprising development: married couples hit the sheets less than they used to. In contrast, sexual frequency hasn’t changed much for uncoupled Americans.

This article explores the declining sexual frequency among married Americans using data from the 2000-2016 waves of the General Social Survey (GSS). What’s responsible for this surprising trend? As Figure 1 shows, the decline is not trivial.1 In 2000, 61 percent of wives and 65 percent of husbands reported having sex at least once a week. By 2016, these numbers had respectively declined to 52 percent and 54 percent. 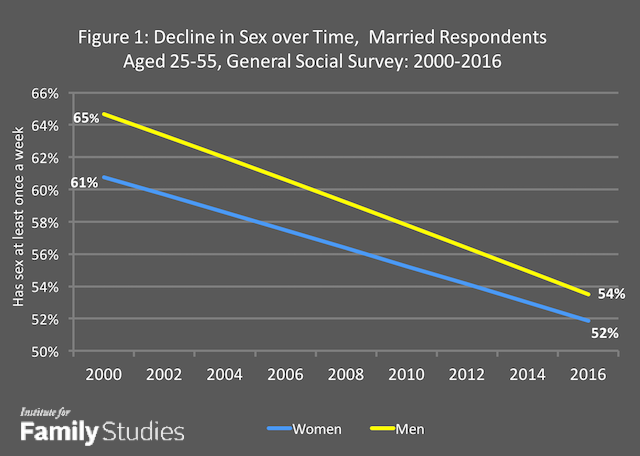 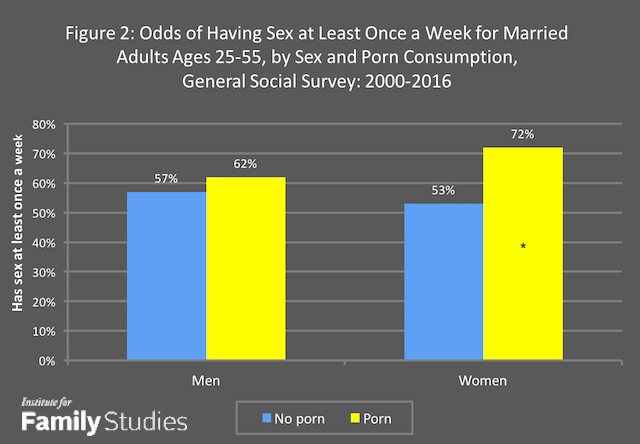 Other differences between respondents cannot explain the downward trend in sex for married Americans. My multivariate analysis adjusted for myriad factors, including race/ethnicity, age, presence of children, religious denomination and participation, employment, urbanicity, education, respondent reports of adultery, and attitudes on gender egalitarianism. None of these factors affected American’s mounting eschewal of their marriage beds.

In fact, measured variables generally had little impact on the odds of having sex at least once a week. Age is a predictable exception: the older people get, the less likely they are to enjoy weekly intimacy. The other factor that makes a large difference is spousal unemployment, but only for female GSS respondents. Women whose spouses are unemployed are eleven percentage points (58% vs. 47%) less likely to report having sex at least once a week, and this difference is statistically significant. The chances of frequent sex also decline when men report having unemployed spouses, but the decline is smaller and nonsignificant. 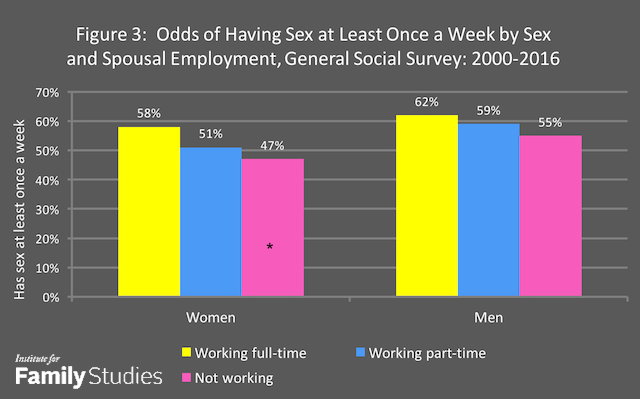 Why does spousal unemployment have such a large effect on women’s sex lives? The overwhelming majority of the sample is in a heterosexual marriage, so I’ll speak of women’s unemployed spouses as husbands. Numerous studies have shown that being out of work takes a harsh toll on men’s self-esteem. Men often see themselves as breadwinners, so when they’re unable to support their families their self-image consequently plummets. It’s not surprising that men suffering joblessness feel less amorous. But many still have their pride, which might be why they themselves don’t report having less sex when they’re out of work. In other words: male unemployment reduces the incidence of weekly sex, but only their spouses will admit it. Indeed, there appears to be a broader difference between husbands and wives in reporting on sex, based on the fact that men are a bit more likely than women to report weekly sex in their marriage. Are women under-reporting sex, or are men over-reporting sex? My finding about women’s reports on men’s unemployment seemingly suggests that men are the fibbers.

Female unemployment also reduces the chances of having sex frequently (62% for wives working full-time, compared to 55% for unemployed wives), but the difference isn’t statistically significant. This may be because women aren’t expected to be primary breadwinners to the same extent that men are, and so their sex lives aren’t as strongly linked to their employment status.

Although porn and employment each has noteworthy effects on sexual frequency in marriage, neither can explain the 16-year decline in sex. So, what can? Twenge, Sherman, and Wells sought to shed light on this question via age-period-cohort analysis. For the uninitiated, APC analysis refers to three different dimensions of time. Age is self-explanatory. Period reflects the social influences people experience at the time they’re interviewed for the GSS. Cohort, more properly known as birth cohort, refers when people were born, and what they experience growing up. Each dimension of time—age, period, cohort—may potentially have a distinct effect on people’s behavior.

The results of this analysis suggest that the reduction in marital sex is largely a product of birth cohort. In other words, people’s sexual proclivities are shaped by the world they grew up in, not the world they inhabit at the time they’re interviewed for the General Social Survey. This would explain why the variables in my analysis, reflecting respondent attributes at the time they’re surveyed, can’t explain the decline in sexual frequency. And there’s other evidence of a decline in sexuality. Millennials have fewer sex partners than do members of Generation Y, who in turn had fewer than Gen X did. Teen sex has dipped significantly since 1990.

There is one complication to this argument. If birth cohort can explain the decline in married sex, why haven't unmarried people been affected? After all, their levels of sexual activity haven’t changed. The simplest explanation is that they already weren’t having that much sex to begin with compared to married people. A lower baseline might have made them immune to a broad-based decline in sex. The more complicated answer concerns the changing attributes of people who get married. This is a question for future research.

Is America less interested in sex? This is a surprising development, especially given that we collectively voice more acceptance of more forms of sexuality than ever before. Ultimately, we’ll need more detailed data than what’s available in the GSS. For instance, there’s been a puzzling decline in testosterone in men since the 1980s. Does this have anything to do with the decline in married sex? Or is the decline a consequence of men and women spending more time with smartphones and other new media and less with one another? Only time will tell.

Sex is one of life’s great pleasures. Indeed, more sex, at least up to once a week, is correlated with greater happiness for people in romantic relationships, so it’s of concern if couples are consecrating their wedding vows less often.