What The New York Times Gets Wrong About Marriage, Health, and Well-Being

Last week, a New York Times 0p-ed, “Get Married, Get Healthy? Maybe Not,” called into question a large body of research indicating marriage is associated with better health, less depression, and greater well-being.1-16 From a rigorous research perspective, some of the earlier studies were indeed methodologically weak, but in the past two decades, that has changed. There are now a number of strong studies that reinforce and demonstrate that marriage—in addition to being a good in and of itself—is associated with better health.5,6

In her New York Times piece, psychologist Bella DePaulo uses a new study out of Switzerland17 to argue that the effects of marriage on health are, in reality, negligible. A closer examination of the Switzerland study, however, indicates that DePaulo did not tell the full story about the Swiss research. Actually, the study begins by reporting that entry into marriage for unmarried men and women is associated with subsequently lower depression, while divorce is associated with subsequently higher depression. The study also notes even larger effects of moving into marriage on increasing life satisfaction, as well as larger effects of divorce on decreasing life satisfaction. The New York Times article seems to try to sidestep these results, instead drawing attention to the findings on “self-rated health.” In this case, the results from the Switzerland study show that marriage is associated with slightly worse self-rated health compared to always being single and that divorce is associated with worse self-rated health compared to being married.

But self-rated health is not necessarily synonymous with health itself. If one examines more objective measures studied elsewhere in the research literature, marriage is in fact protectively associated with more objective health measures.5,6,11,13,14,16,18 In my own research at Harvard University, in a paper using data from the Nurses’ Health Study that followed over 74,000 participants for over 16 years, marriage was associated with 14% lower mortality during the following 16 years (see Supplement eTable 12 of my study),18  even after controlling for numerous social, demographic, and baseline health variables (see figure below). While the study focused on religious service attendance, it also examined marriage. Although the effect of marriage is not huge, it is protective, and similar effects on mortality have been reported elsewhere.5,6,13,14 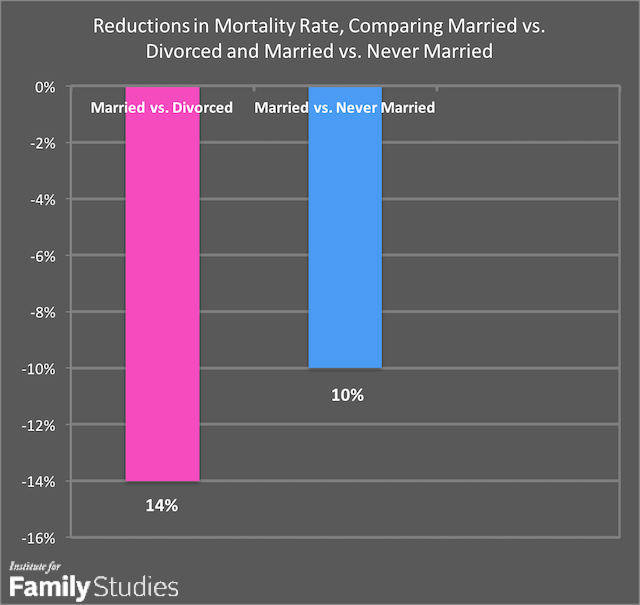 The Nurses’ Health Study population was also somewhat older than the study population in Switzerland. Rather surprisingly, the Switzerland study excluded anyone above the age of 65, where health problems are most likely to develop, and consequently where marriage may be most protective.

DePaulo criticizes research of the sort we reported in the Nurses’ Health Study for not distinguishing between the transition from singlehood to marriage, versus from marriage to divorce. And indeed, the Nurses’ Health Study participants were married upon study entry so that the estimate reported above is more reflective of the adverse impact of divorce compared to marriage. DePaulo argues that if you marry, you are also more likely to divorce. That is, of course, true: the effects of continuous marriage on health are going to be more protective than marriage followed by divorce.

But DePaulo seems to suggest that the right way to avoid divorce is to not marry. A more sensible solution would be to develop support resources to work through marital difficulties, when appropriate. Marital counseling, maintaining commitment, online marriage support resources,19 and the passage of time can pay off.16 One study indicated that among those who were married and rated their marriage as “very unhappy” but stayed married, 77% said that five years later the same marriage was either “very happy” or “quite happy.”16

Beyond the question of divorce, however, a vast literature now exists (in addition to the Switzerland study) on the objective health effects of marriage,5,6,11,13,14,16,18 including studies that have examined never-married populations: these studies find similar protective effects of marriage.3,5,6,13,14

In fact, about 10 years ago, there were two systematic reviews of this literature using longitudinal data and objective health measures that suggested strong evidence for the protective effects of marriage on health and longevity. 5,6 A meta-analysis of 53 studies likewise found protective effects of marriage on the rate of mortality with a 14% reduction in mortality for married individuals compared to divorced individuals, and a 10% reduction in mortality for married compared to never-married individuals13 (see figure above).

Was the study from Switzerland wrong? Perhaps not—the health measures in the study are different. Again, the study uses measures of “self-rated” health. Someone who marries, and perhaps subsequently has children, may end up sleeping less, exercising less, or gaining weight, and might then score “self-rated health” lower (and here, having been married for three years with an 18-month-old son, I also speak from my own experience).

However, is that person, on the whole, less healthy? That is less clear. The evidence suggests that, on average, those who are married are less likely to die in the next 10 to 20 years, are less likely to become depressed, and are more likely to be satisfied with life.1-18 On more objective measures of health, such as mortality, and on states of mental well-being, the married person is likely better off. The potentially worse sleep and exercise, and perhaps ambivalent “self-rated health” appear to be more than offset by the psychological and behavioral benefits of marriage. That is what the best research indicates.

In fact, the study from Switzerland actually grants most of this. The New York Times op-ed, sadly, does not. It is a piece of poor and selective reporting that completely ignores the overall state of the research on this topic. The author’s hubris is also remarkable. She writes: “Now that we know that’s just not so [that marriage causes health], maybe we should celebrate our newfound wisdom.” There has been a great deal of media attention of late on the “replication crisis” in science—the failure of results to replicate across studies. My own view is that while research practices could certainly be improved, much of the problem lies in the reporting of the research, and in the over-reporting of a single study with what often seems to be total ignorance of the cumulative evidence of the research literature. DePaulo’s New York Times article is a sad illustration of this.

Certainly, single persons occupy an important place in society, and other communal involvements can also be important and protective for health, but to deny marriage a fundamental role in health and well-being, now and throughout history, is to ignore where the evidence points. Moreover, here we have only been discussing the effects of marriage on individual health. The effects of marriage on children, and consequently on the next generation and thereby all of society, are the focus of an entire additional body of research literature. The contribution of marriage to human flourishing is substantial, a fact that The New York Times and Bella DePaulo, unfortunately, seem to miss.

Tyler J. VanderWeele, Ph.D., is Professor of Epidemiology in the Departments of Epidemiology and Biostatistics at the Harvard School of Public Health, a faculty affiliate of the Institute for Quantitative Social Science, and Director of the Program on Integrative Knowledge and Human Flourishing at Harvard University.

5. Wilson CM, Oswald AJ. (2005). “How Does Marriage Affect Physical and Psychological Health? A Survey of the Longitudinal Evidence.” IZA Bonn Discussion Paper No. 1619. The Institute for the Study of Labor.