What factors are most strongly associated with relationship satisfaction? A new and massive study by Samantha Joel and Paul Eastwick used 43 data sets to answer this question based on longitudinal data from 11,196 couples.

This study will inspire other research for years. Joel and Eastwick examined something people are forever interested in—what predicts how relationship are doing now and in the future?1 The study was groundbreaking in a number of ways, starting with the scale of collaboration resulting in an exemplar of team science. Joel and Eastwick gained the collaboration of 84 other researchers who contributed their data sets for use in the project as well as input along the way. Galena Rhoades and I contributed one of the 43 data sets (no. 29, in fact) and are co-authors along with the long list of scholars who got involved. To be clear, though, this study is entirely based on the vision, execution, and sheer tenacity of Joel and Eastwick.

They used a procedure called Random Forests that relies on machine learning and massive amounts of computing time to test the strength of each predictor and then build thousands of decision trees (a forest), which reveal how much each of the predictors could explain in relationship satisfaction. This was done on every one of the 43 data sets, and in several passes on each for different aspects of their research questions. Although all research procedures are influenced by decisions researchers make at every step, this particular method is believed to produce the information without the researchers putting their thumbs on the scales for a specific theory or finding to come out the other end. (In contrast, some studies are all thumbs.) Joel and Eastwick then used meta-analytic procedures of all the findings from the specific data sets to determine which characteristics were most strongly associated with satisfaction.

Before going further, it is important to keep in mind that this study does not examine divorce or break-up, as only data from time points where couples had remained together are used. Other findings and nuances would be obtained evaluating what predicts stability. Second, the data are based on self-reports, hence, the focus is on people's perception of things. As you’ll see, that is both important and interesting, here.

“It’s Not Who You’re With, but the Dynamic You Have With Them.”

That’s the study's primary take-a-way as often stated by Joel and Eastwick. Of course, how a relationship goes will be very much related to who you choose; not any random partner will make you happy, but the experience of the relationship is what matters most for satisfaction.

Joel and Eastwick examined a huge number of variables, classifying them in the following three groups:

The first two categories include measures of things, such as affection, appreciation, conflict, empathy, aggression, sexual satisfaction, supportiveness, along with characteristics, like living together, marriage, duration of the relationship, and so much more. The third category was comprised of characteristics of the individuals, including personality factors, anxiety, attachment, alcohol use, family history, and demographic characteristics.

The wide range of constructs in this field are shown in Figure 1 from the paper below. It also depicts one way all of these things are believed to fit together to influence relationship quality, and how, in turn, that influences many aspects of life. Of course, many directions and pathways are possible between these factors, which was not the focus of the new study. 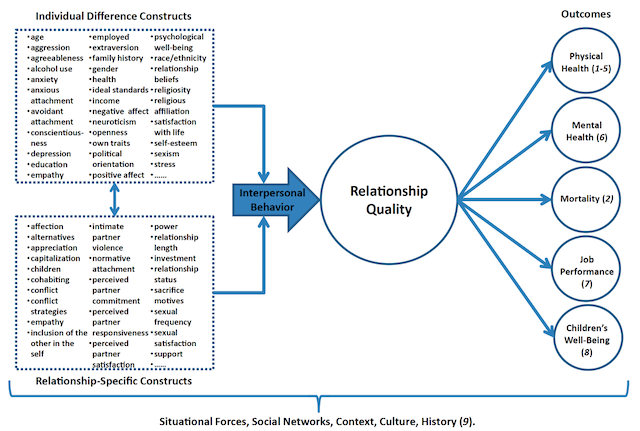 Joel and Eastwick found that Partner 1’s ratings of satisfaction were mostly explained by their own ratings on all these other dimensions. That’s not too surprising. What was more startling is how little information partner 2’s information added to explaining partner 1’s satisfaction, and that neither partner’s individual characteristics added much further information. It is not that these latter elements cannot predict satisfaction on their own, but in combination, they did not add much. Further, nothing at time one in these data sets predicted increases or decreases in satisfaction over time all that well. In Samantha Joel’s words in her university’s release:

Suppose you are using an online dating service, looking at a lot of profiles (and pictures) of potential partners. These findings suggest you are not going to know much about who you would be happy with by knowing a lot of basic details about a potential date. As Joel has argued so well, you are going to learn the most about a possible fit between you and another person by what you actually experience with that person.

By the way, personality characteristics explained very little about relationship satisfaction. Many people think what they need is to find is a good match on personality, but that’s just not true. One of the best explanations I have read of how this really works came from Marcel Zentner, who suggested that similarity does not matter nearly as much as being with a person who has a type of personality that you enjoy being around. For some people, the last thing they want is to be with someone a lot like them; others want exactly that.

Joel and Eastwick did find that some individual characteristics were more strongly associated with relationship satisfaction than others. Three that stand out are: life satisfaction, depression, and issues related to comfort with attachment to others.

Across everything studied, the top five variables that explained the most variance for both present and future relationship satisfaction were these:

Do you perceive your partner to be highly committed to you? Do you appreciate your partner? Are you sexually satisfied? (I’m not actually asking and there is no comment section here.) 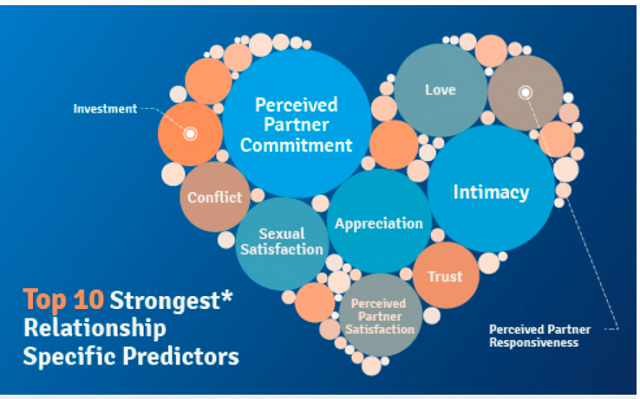 Is Relationship Satisfaction All in Your Head?

The short answer? Of course it is—at least, mostly. But a large part of the story of relationship satisfaction is explained by how satisfied or committed (and a host of other things) you believe your partner to be.

As Joel and Eastwick say in their paper, “These results are consistent with the idea that people project their own relationship perceptions and behaviors onto their partners.”

And about that perceived commitment finding: Galena Rhoades and I showed in our data set that in the time points leading up to people marrying, ever perceiving one’s partner to be less committed than oneself—even a little bit—was one of the best predictors of unhappiness in marriage.2 Of course, that overlaps with all the work we have done over many years in examining asymmetrical commitment.3 I believe it may be particularly important for a person searching for a mate to carefully consider what truly signifies commitment. You do not want that to be all in your head.

Searching or Already Found Someone? Some Quick Thoughts

If you are searching for a partner in life, pay attention to how you experience the relationship. As noted earlier, Samantha Joel has been arguing this point for some time. You might be thinking, “duh, Scott,” but too many people likely end up with someone who they believe “looks right on paper” or who checks off all the right boxes—all while not paying enough attention to more important things. Who you choose is going to matter a lot, but what you should pay the most attention to is how it feels to spend time with that person.

For those who have a commitment to someone already, say, in marriage, the advice I have based on this new research is a bit different: Do not spend a lot of time wishing your partner was different on things like personality or education or political views. Focus, instead, on what you can do to make the dynamic between the two of you as good as it can be. That is going to mean looking for levers you can pull to make a difference (such as listening more to your partner or being more emotionally supportive)—not waiting around for your partner to change.

Scott M. Stanley is a research professor at the University of Denver and a senior fellow of the Institute for Family Studies (@DecideOrSlide).

1. By prediction, I do not mean that anyone sat down and talked with all these couples or gave them a survey and then predicted, ahead of time, how their relationships would turn out. I mean something much more precise: Joel and Eastwick examined factors that were associated with both current and future satisfaction and commitment. No one was placing odds on specific couples making it or not—and, in fact, researchers are really not that great at doing that.

2. We have both been busy on other projects, so we have not gotten around to publishing those findings in a journal article, but the analyses and data set are, in my view, quite robust.

3. I have placed loads of links on that subject from our work at my blog.

by Alysse ElHage
Divorce and Break-Ups, Marriage and Relationship Education