The marriage divide between more and less educated and affluent Americans is well known.1  But how does this divide actually play out in the ordinary lives of Americans? Here, we take up this question by looking at the links between education, marriage, and television viewing.

Excessive television consumption can be a marker for low levels of happiness and poor health among adults. Watching TV in moderation may indeed be a positive activity for many Americans. However, researchers have continually found high TV consumption to predict less happiness and life satisfaction among adults.2  Researchers have also found television consumption to be associated with poorer physical health and well-being overall.3  One study even found that for every hour of television people watch, average life expectancy falls about 22 minutes.4  This data does not necessarily indicate that watching TV—in itself—has such negative impacts on a person’s health. However, it does suggest that more TV time—at the very least—reflects a less healthy lifestyle among American adults.

So, how does television consumption vary by class and marital status? Using data made available by the American Time Use Survey (ATUS), we can see that separated or divorced adults, and those who never marry, generally spend more time in front of the TV screen than their married peers (Figure 1). This difference is particularly pronounced among men, with divorced, separated, and never-married men watching an average of 3.1 hours of television every day, while married men spend only 2.3 hours per day watching TV. These results make some intuitive sense. Married adults are more likely to have additional responsibilities within the house, so they may engage in family-oriented activities other than watching television. 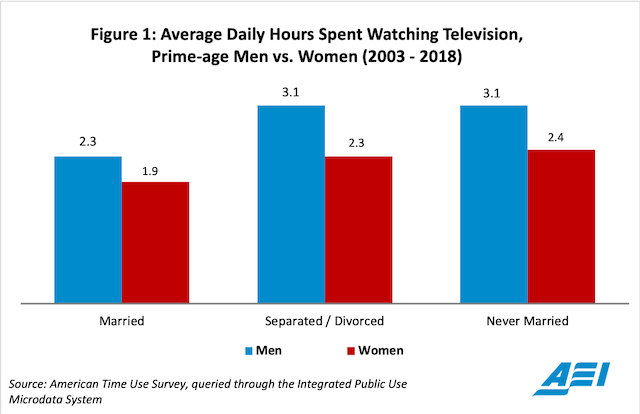 Some might respond to this explanation by arguing that marriage does not matter so much as living with another adult when it comes to determining how much time adults have to watch television. The idea that cohabiting adults share similar levels of responsibility as married couples may seem accurate. However, the data tell a different story. Prime-age adults living with an unmarried partner spend much more time watching television than those living with a spouse (figure 2). For women especially, cohabitation with an unmarried partner means watching nearly the same amount of television as women who live alone. 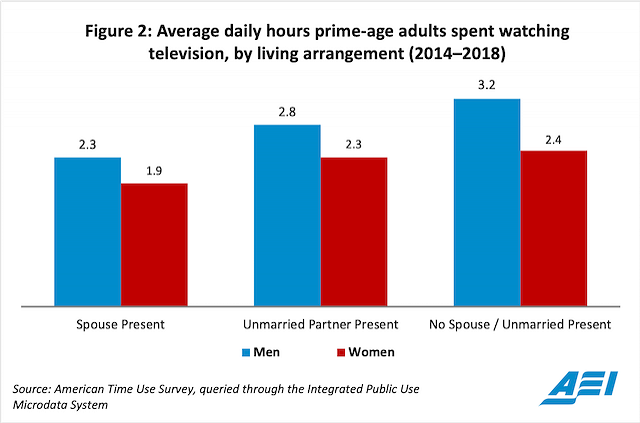 Additionally, when looking at the groups of adults who are most impacted by the marriage divide, we find that these groups tend to experience a double-disadvantage in television consumption. Across educational groups, divorced, separated, and never-married adults spend significantly more time watching television than married adults (figure 3). But marital status has the largest impact on people without a college degree. 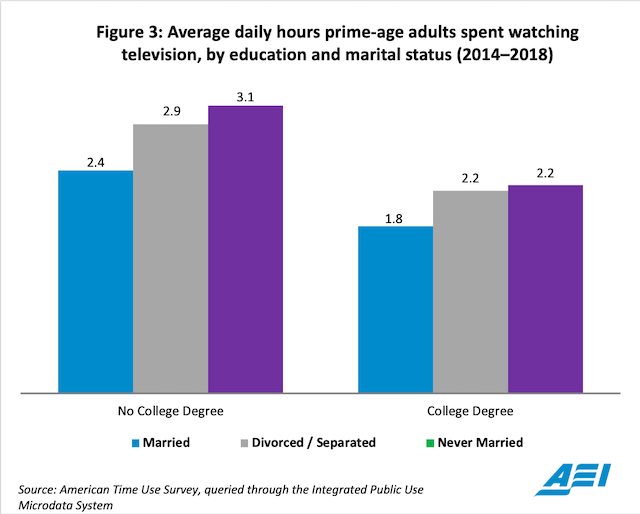 A similar story develops when looking at TV viewing habits by race and ethnicity. Within each racial and ethnic group, married adults spend less time watching TV than divorced, separated, and never-married adults (figure 4). However, unmarried White, Black, and Hispanic adults spend much more time watching television than Asians—a group that has escaped some of the concerning trends in the marriage divide. 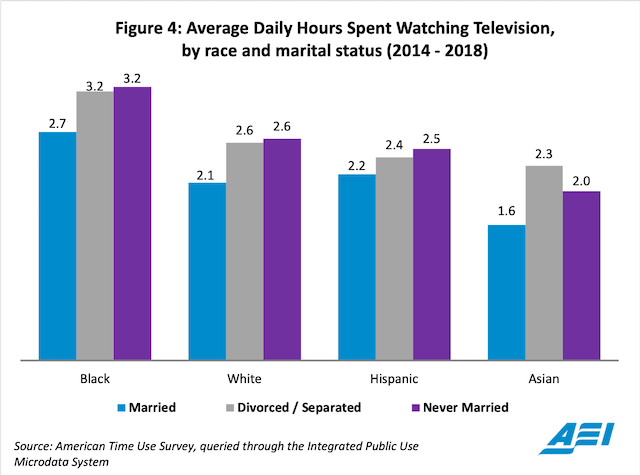 The data presented here reflect the reality that marriage continues to be an important anchor for Americans’ lives.5  Marriage provides structure and purpose, and it often fills people’s days with rewarding activities, whether that be taking a child to soccer practice, sharing a meal with family, or engaging in religious services with one’s spouse. Prime-age adults who experience unsuccessful marriages or who never marry tend to spend more hours in the day in front of the television screen, which likely has important ramifications for the happiness and satisfaction of these groups.

Without the anchor of marriage, feelings of isolation and unhappiness in many Americans may be compounded by excessive TV consumption. Perhaps most concerning is that excessive television viewing may not be intentional but is likely used as a tool to fill vacant time these adults would otherwise spend on more rewarding activities. In looking at the data surrounding television consumption, we see a prime example of how the marriage divide impacts the every-day lives of Americans.