“I’ve read that sexual activity has been declining among teenagers. Is this still going on? If so, does this apply to teens who are part of my religious group?”

This is a question I often get when I communicate with religious individuals about the high amount of teenagers in their ranks who are having sex. Solid research has shown that sexual activity among teens has been declining since 1988. These trends have been covered in the media enough that many people have heard of it.1 But none of these studies have focused on specific religious groups.

This important gap in the coverage of the decline in teenage sexual activity, and the questions I keep being asked about it, led me to research this issue on my own. On the one hand, I focused on more recent trends, beginning with the period up to or just prior to 2010. On the other, I extended previous research forward to the year 2019. To do this, I used the last five cycles of the National Survey of Family Growth (NSFG),2 starting with the one completed between the years 2006 to 2010 through 2017 and 2019.3 I looked at trends in sexual activity among never-married teens ages 15 through 19, overall and by religious category.4

Not Much Decline in Sex Among Most Religious Teens

There was a significant decline in ever having sexual intercourse among all teenage girls ages 15 to 19,5 as well as among girls with no religious affiliation and among Roman Catholics.6 Among Catholic teenage girls, the percentage who ever had sex declined from 39% in 2006-10 to 26% in 2017-19, while for those with no religious affiliation, it declined from 54% to 46% during the same time period. However, there were no significant declines among Mainstream Protestant, Evangelical, or Black Protestant teenage girls.

For teenage boys overall, there was only a clear, significant decline between the two time periods, as well as among boys with no religious affiliation. However, among boys within the various religious groups, the declines were too small to be significant, to the extend they existed at all.7 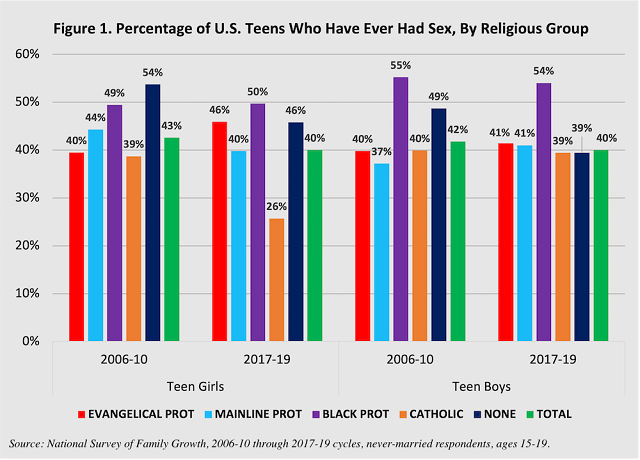 Some Decline in Sex by Age 19, Especially Among Catholics

Keep in mind that within this larger age group of 15 to 19-year-olds, the percentages of previous sexual activity would naturally be lower for younger teens, and higher for older teens. Figure 2 shows the amount and direction of change, for teen girls and boys overall and in each religious category, that occurred by age 19. Except for Evangelicals and Mainstream Protestants, where there was a slight increase in sexual intercourse, there has been a general decline among older teenage boys across this time period. The decline in ever having sex by age 19 is quite substantial for both Catholic young men and women.8 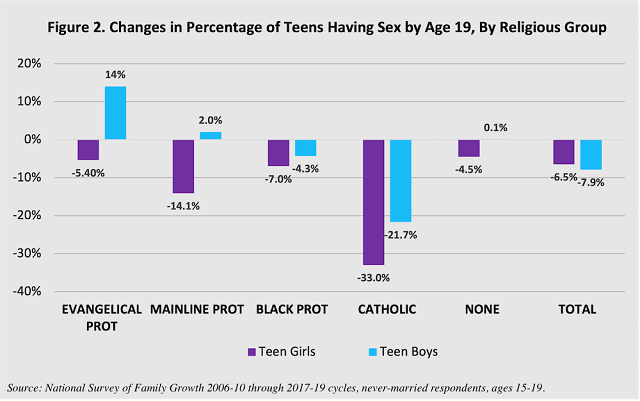 Sex With 3 or More Partners

Finally, I looked at the percentages of young men and women who have had three or more sex partners. For young women, the only significant difference occurred among the religiously unaffiliated between the two time periods.9 For young men overall, as well for Catholics and Evangelicals, sexual activity declined significantly between the 2006-10 and 2017-19 NSFG releases.10 However, among Evangelicals, the big decline occurred later. The percentage of Evangelical teens (boys and girls) reporting 3 or more sex partners increased from 55% to 64% between 2006-10 and 2013-15 (not shown in figure 3 below), then dropped to 31% from there until 2017-19. For Catholic teenagers, the decline really began with the 2011-13 survey forward, dropping from 62% to 34% in 2017-19.11 Overall, there was more of a decline among teenage boys than girls when it comes to having three or more sex partners. 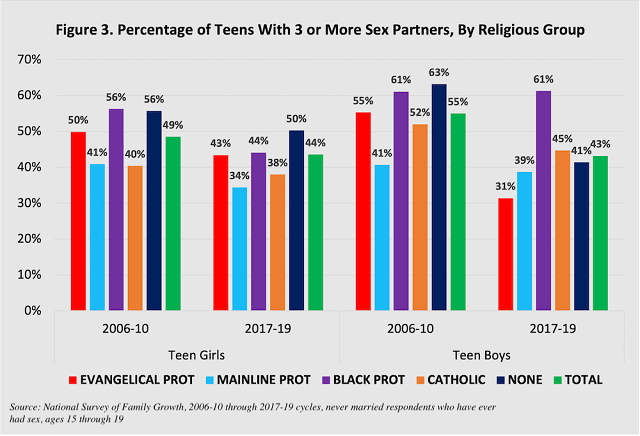 Potential Causes for the Declines

Sadly, my analysis of the NSFG does not show that religious motivations are driving any of the decline in teenage sexual activity, overall or within any religious group. First, for both young men and women across the faith groups examined here, the percentages of never-married teens attending church weekly or more have been lower, the same, or not significantly higher since 2006-10.14 The percentages saying that religion is “very important” to their daily lives was significantly higher15 in the latest NSFG release only for Catholic young men. If declines in sexual activity were tied to increases in religious commitment overall, then we should see increases in religious commitment across the board. We do not.

Meanwhile, the NSFG asks respondents who have never had sexual intercourse to provide the main reason they have refrained from sex. Only one possible response focuses on religious faith—namely that they have abstained from sex because it goes “against religion or morals.” In the five survey cycles I examined, the percentages of sexually-abstinent teens who chose that response actually declined for Catholics, Mainline Protestants, and Evangelical Protestants,16 and stayed almost exactly the same for Black Protestants.

This analysis does not contain a lot of encouraging news for those looking for major, across-the-board declines in sexual activity among most religious teens, although there certainly is a bit of good news for some groups. The best numbers were to be found, generally, among Catholics, especially teenage boys.

Religious leaders, teachers, and parents need to be cautious about assuming that overall declines in sexual activity apply to those within their larger religious classification. Regardless, no survey is an adequate replacement for being aware of what is going on among young people in one’s own church. My hope is that this brief glimpse of trends in teen sexual activity over the past decade or so will spur religious leaders to take a more careful and thoughtful look at how teens in their churches are doing in this vital area of well-being and do more to encourage healthy marriages and family life for young people.

David J. Ayers is Professor of Sociology at Grove City College, Marriage and Family Fellow with the Institute for Faith & Freedom, Fellow with the Maryland Family Institute, and author of the recently released Against the Revolution: Sex and the Single Evangelical (Lexham, 2022).

2. Percentages in each survey cycle are weighted as per CDC instructions, to enhance national representation. But following the CDC’s 2015 study linked above, all statements of statistical significance are based up raw, unweighted frequency. I compare years using Chi Square.

8. The absolute sample sizes within each of these age categories were too small to do adequate tests to see if differences within them over this time period are statistically significant. However, it is interesting that among Catholics, even with these small samples, there were statistically significant declines between the 2006/10 versus 2017/19 at age 19 for both genders: females at the .05 level and males at .01.

11. This difference significant at the .01 level.

14. Given the benefits associated with regular church attendance for young people, this is in itself disappointing. See Wilcox, W. Bradford, “Is Religion Traumatic for Kids? New Data Suggests Otherwise,” Institute for Family Studies, August 4, 2022.

16. In fact, among Evangelical, Mainline, and Catholic females, the decline in the percentages giving this answer was significant at the .01 level.