To Have Kids or Not: Which Decision Do Americans Regret More?

Should you have children? And if so, how many? Asking and answering these questions is not only deeply anguishing for many individuals but also bears on national and global well-being. Contemporary discussions of childbearing range from the writer who got a vasectomy due to climate change to the regular reports of declining fertility across the world, including the 4% decline in 2020 in the US.

Amid this discussion, The New York Times opinion writer Elisabeth Bruenig penned a moving essay about her personal experience as an outlier among her high-status, educated peers— she gave birth to her first child at 25 and, what’s more, she’s “not sorry she didn’t wait.” This simple notion, timed to coincide with Mother’s Day of all days, caused pandemonium. Among the various critiques of Bruenig’s lived experience were those who suggested that if we have to hear from women who love their children, we should also read more essays from women and men “who regret having children,” as writer Jill Filipovic suggested. Among the many replies were those like this, from @MAStirling, who wrote:

I have daughters so I've been pretty honest with them. I've encouraged them not to have children. They know I love them, but they also know that motherhood in our country is a prison sentence.

While the commentary focused on whether we should regret the decisions we make about having or not having children, no one presented the facts about how many of us actually do regret these decisions. Each person may have their own individual story to tell, but it turns out that the vast majority of people want to have children and, as we'll show, more than a third wish they had more children than they currently have.

This is according to the second wave of the “U.S. Adult Sexual Behaviors and Attitudes Study,” a survey of 1,518 adults I designed and fielded in March 2021. Among the respondents, ranging in age from 18 to 74, 68% have at least one child. Another 19% have not had children nor want to have children, while the remaining 13% do not have children but still hope to. The fact that more than three-fourths of adults already have or want to have children should itself be evidence that something very fundamental is at work, likely the same biological predisposition that motivates all life on the planet.

But that fact could open the door to even more regret. If we’re physiologically bent on having children, perhaps we later regret the outcome, encumbering as it is upon our personal freedoms. Though some commenters on the Bruenig essay feel this way, it is not common. While the present study did not explicitly ask whether people regretted having children, it did approach a topic that is similar, asking those with children to agree or disagree with the statement, “I wish I had had fewer children.”

Just 14% of people with children (10% of all adults) agreed with the statement. And even with these, we don’t know whether they regret ever having children or just wish that they had fewer children. Either way, the maximum share of people who are not inclined toward joy in children is 29%, including those who don’t currently have children and those who don’t want to, as well as those who wish they’d had fewer. This is not close to a majority, but it is also not a trivial number.

Conversely, when asked if they wished for the opposite, if they agree that, “I wish I had or would still like to have more children,” 24% fall into the category of already having but still wanting more children. This is consistent with research shared on IFS in 2018 using Gallup data showing that women regularly wish to have more children than they do.

The final score? As shown in the figure below, 29% of U.S. adults either do not want to have children or wish they had fewer. A third (34%) have children and are happy with the number they have and another third—the largest group—wish they had more (37%), whether currently parents or not. In other words, those with no apparent regret or reluctance outnumber the rest by more than 2 to 1. 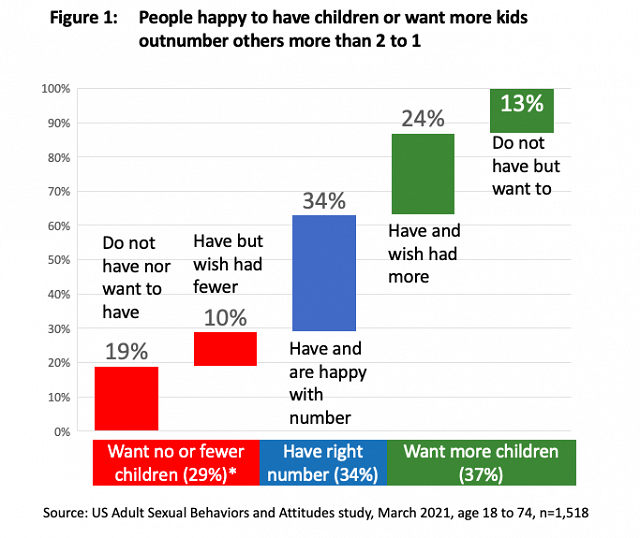 Of course, none of the aggregate statistics tell us what we should feel individually, nor should they compel someone's personal choices. But this should give us pause as we consider whether we can so easily tell people that personal choices related to procreation are merely that, just personal choices, some of which we will regret and others we will not. For some reason, most of us really want to have kids. And for those that do, an astonishing 88% agree that “having children is one of the most important things I have done.” This suggests the joy far outweighs the regret.

This all suggests that our bodies are doing what they seem designed to do: motivating us to bond with mates and procreate. As I’ve previously written, people who want marriage and family are happier than those who do not. This includes singles who do not currently have a partner—their life satisfaction is predicted by their desire to bond and procreate independent of their current life situation.

Borrowing from the old Sinatra hit: “Regrets? I’ve had a few.” But having children is not one of them for the majority of Americans.

1. In March, 2021, the a survey of US Adult Sexual Behaviors and Attitudes was fielded to a U.S. representative sample of adults ranging in age from 18 to 74. The outgoing sample was balanced by sex, age cohort, and U.S. Census region. Sample sourced from and data collection provided by Dynata, a global leader in first-party data and data services. The respondents were weighted back to the outgoing sample parameters for sex, age, marital status and region. Data were validated for internal consistency and compared for population representation to U.S/ Census data and GSS data for income, rates of marriage, and childbearing. The project was conceived, designed, executed, and paid for entirely by Dr. James McQuivey.