Ties That Bind: Childrearing in the Age of Cohabitation

by W. Bradford Wilcox, @BradWilcoxIFS Laurie DeRose
Back to Blog

From the United States to the United Kingdom, from Peru to the Philippines, marriage is in retreat and cohabitation is on the advance. The implications of this shift for adults are much debated; some see it as an important indicator of liberation, others see it as a troubling sign of growing social isolation. But even more important might be the impact on kids.

In the United States, the picture is somewhat dark. Today, a growing share of children are born to cohabiting couples (about 20 percent now), and such children are approximately twice as likely to see their parents break up by the time they turn 12, compared to children born to married parents. What’s more, even among highly educated American couples with children, cohabitation is about twice as unstable as marriage: 49 percent of college-educated mothers will break up with their partner before their child turns 12 if they were cohabiting at the time of that child’s birth, compared to just 18 percent of mothers who were married at that point. In the United States, then, marriage comes with a substantial stability premium for children. 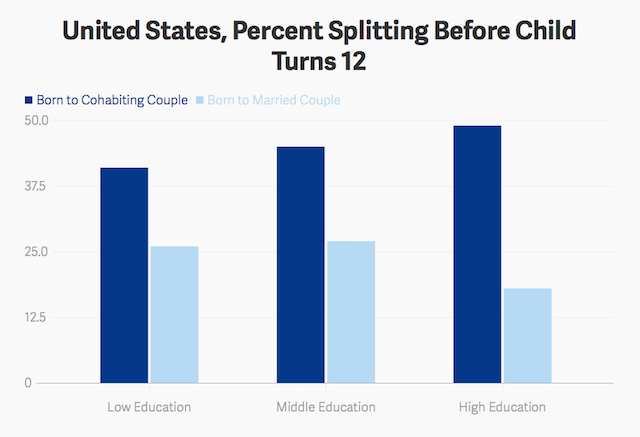 This matters because children are more likely to thrive on stable routines with stable caregivers. Family instability is, by contrast, risky. As sociologist Andrew Cherlin has observed, “some children seem to have difficulty adjusting to a series of parents and parents’ partners moving in and out of their home.” Children who experience their parents’ breakup and then additional family transitions are, among other things, more likely to end up pregnant as a teenager, to be unhappy, to be disruptive in school, and to end up without a college degree.

It is precisely the endemic instability associated with cohabitation in the United States that has led family scholars to express concern. Richard Reeves, the co-director of the Center on Children and Families at the Brookings Institution, has no moral qualms about cohabitation, but he is concerned by its relative instability in the United States: “The issue is the fragility of cohabiting vs. married relationships. Children born to cohabiting couples do worse because their parents are much more likely to break up,” adding, “This instability is what damages children’s well-being.”