The Role of Marriage in the Suicide Crisis

America is in the middle of a suicide crisis. Since the turn of the millennium, the suicide rate has risen 35%, increasing year-on-year. In 2018, there were nearly 50,000 suicides, the highest per capita rate since the second World War.

As I've written at the Washington Free Beacon, this unprecedented spike resists easy explanation. Popular theories—the widespread availability of firearms, the rise of social media and the internet, and spiking "despair"—at best account for a fraction of the increase. As such, assuming that the crisis is multicausal, it is worth investigating the roll that changing social institutions play in mediating suicide risk.

Personal relationships, and marriage in particular, bear substantially on self-inflicted mortality risk, including suicide. As University of Maryland sociologist Philip N. Cohen noted in a working paper last year, the increase in overall mortality rates among white Americans—so-called "deaths of despair" attributed to "self-inflicted" causes like drug overdose, suicide, and alcohol abuse—is "limited almost exclusively to those who are not married, for men and women." Research from the National Longitudinal Mortality Study (NLMS) finds that divorced people, in particular, were twice as likely to commit suicide compared to married people.

Those findings comport with mortality data from the CDC's annual Multiple Cause of Death Files, adjusted for population estimates for different married groups based on the Current Population Survey's Annual Social and Economic Supplement. 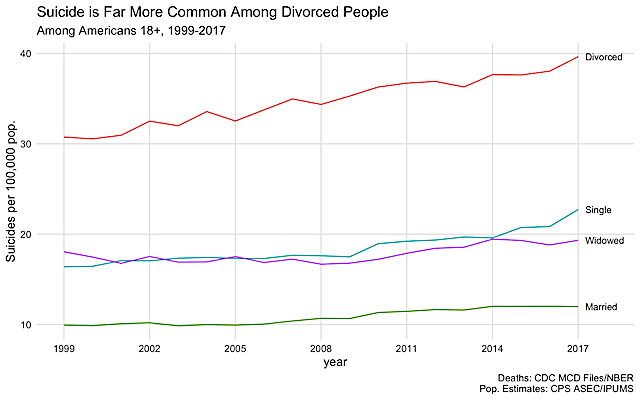 The effect apparent from the population-level data is even more pronounced than that in the NLMS data. The suicide rate among divorced adults is more than three times that of married adults, while the suicide rate among singles is 1.5 to 2 times the rate among those who are married. In other words, marriage is a protective factor for suicide risk.

There are multiple stories that one could tell about this finding. Those who are more likely to marry may also be less likely to commit suicide, for reasons of personality, environment, or both. Socioeconomic status, in particular, mediates the relationship between marriage and suicide risk: increasing white mortality rates are driven by those at the bottom of the education distribution, who are also increasingly less likely to be married compared to their well-educated peers.

It is not implausible, however, that there is also some causal relationship between marriage and lowered suicide risk. Married people are on average happier. They also, definitionally, have at least one person to whom they are robustly socially linked—meaning they are less likely to be lonely, among other positive outcomes. Divorce, by contrast, is linked to depression in at least some people.

In assessing the relationship between marriage and the suicide spike, it is worth examining how the marital composition of the population has shifted over the past 20 years. In 1999, 58.6% of the over-18 population was married; in 2019, that figure was 54 percent. The single share of the population, meanwhile, rose from 24.4% to 29.6%, while divorced and widowed shares remained constant. In other words, America has grown slightly less married, slightly more single, selecting overall into a more suicide-prone category. 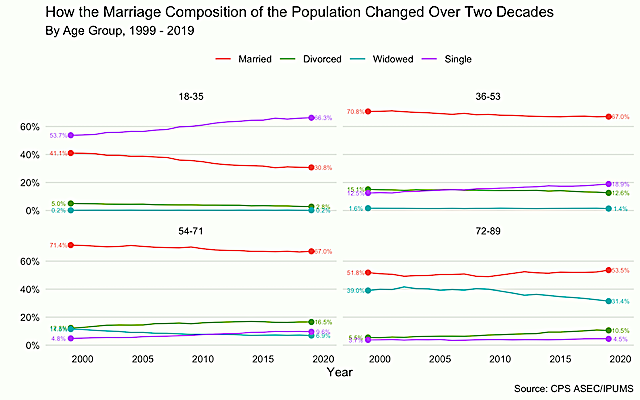 We can decompose these numbers by age to identify some specific trends. Americans 18 to 35 are a full 10% less likely to be married than they were two decades ago. Divorce and singlehood have also risen among Americans age 54 and up, by four to five percentage points—reflecting the emergence of so-called grey divorce.

Evidently, suicide rates have risen within each marital category. But to what extent does the changing marital composition of the population affect the overall suicide rate? 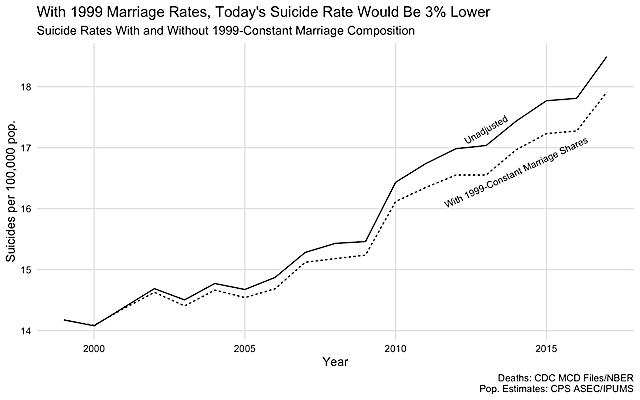 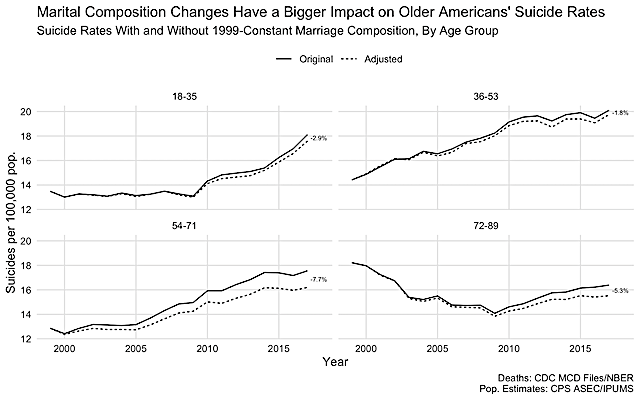 The effect is more pronounced decomposing by age group. Marriage adjusting reduces the 2017 suicide rate by 2.9% among Americans ages 18 to 35, and 1.8% among Americans ages 36 to 53. But it cuts it by 7.7% among those ages 54 to 71, and 5.3% among 72 to 89-year-olds. This suggests that rising singleness and divorce may have a larger role in the increase in suicide among older Americans.

None of these effects are large—11,000 is just a fraction of the total suicides since 1999. But the change in the married share of the population is also not large—as mentioned above, American adults are only a few percentage points more likely to be unmarried than they were 20 years ago. The longer-term decline of marriage shares—74% of adults were married in 1962, compared to 54% today—may have primed the population to be more prone to suicide, given a spike induced by one or more exogenous causes.

In other words, if marriage does have a protective relationship to suicide, then its decline implies a longer-term risk. Some of that risk will be mediated by the dropping popularity of divorce among younger Millennials, but insofar as that drop is a function of increasing socioeconomic divergence in marriage, that mediation is likely to be minimal. This is particularly concerning given the aforementioned socioeconomic gradient in access to marriage: if something is inducing rising suicide rates, and less-well-off Americans are more likely to lack the protective power of marriage, then they will be disproportionately at risk. The contrary point, of course, is also true: working to reduce the social and socioeconomic barriers that keep many out of marriage may mean a lower suicide rate, the sort of change which America could surely use right now.