The Road to Infidelity Passes Through Multiple Sexual Partners

It is advice that appears to apply to people who want to engage in—or prevent—marital infidelity. People who are sexually unfaithful to their marriage partners “practice” behaviors going back to their very first sexual experiences that increase the likelihood that they will be unfaithful. Conversely, by avoiding those same behaviors, those who wish to remain faithful to their marriage partners can reduce the likelihood that they’ll be the source of marital infidelity.

We learn all this from a recent study of 1,001 US adults that I conducted in April of 2019, in which 500 men and 501 women were asked about their relationship behaviors, sexual practices, and attitudes toward a variety of relationship issues (for the details of this survey, please see the footnotes).1

Among the participants, 16% of married adults had committed sexual infidelity at least once in their current marriage (the study did not measure infidelities that occurred in prior marriages). And this finding is consistent with similar reports based on the General Social Survey. While many things contribute to one’s likelihood of having an extramarital affair, one of the strongest predictors is the number of lifetime sexual partners.

My study also examined factors that predict the tendency to have multiple lifetime sexual partners. Some obvious demographics emerge, as shown in Figure 1. 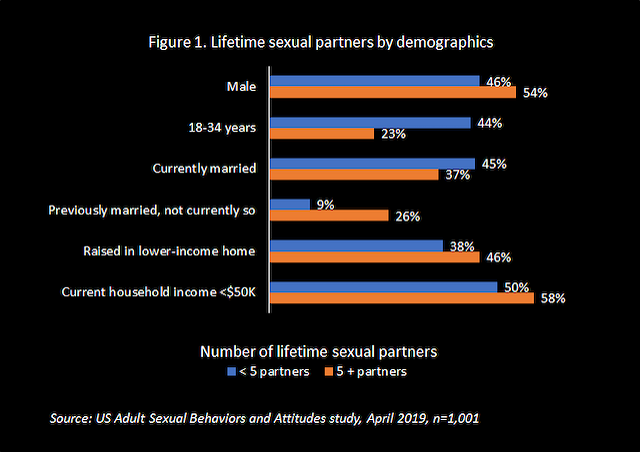 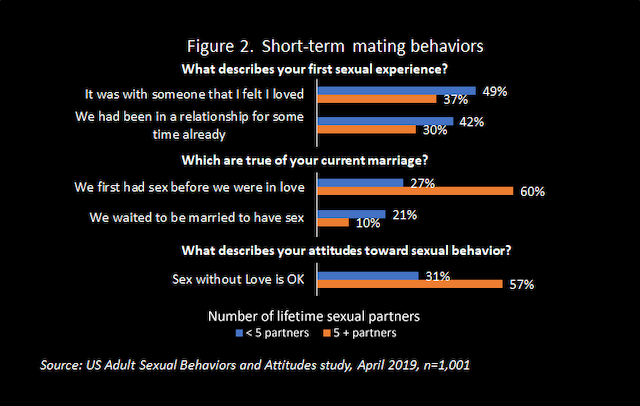 These short-term mating behaviors and attitudes are a type of practice that prepares one for future sexual variety. But this practice can extend into fantasy as well.

Consider pornography: for those with fewer sexual partners, 45% reported not looking at porn compared to 31% of those with more sexual partners. This practicing for sexual variety and possibly infidelity goes even into the hypothetical. When offered a chance to have a risk-free sexual encounter with a celebrity they find sexually attractive—and when assured that it would be a sexually satisfying experience—31% of all adults in the survey said they would “definitely” do it, by marking 5 on a 1-to-5 scale. Because this response should differ by whether someone is currently married or not, we broke respondents out by whether they were currently married as well by their number of lifetime sexual partners. The results in Figure 3 capture the tendency to mentally practice infidelity. 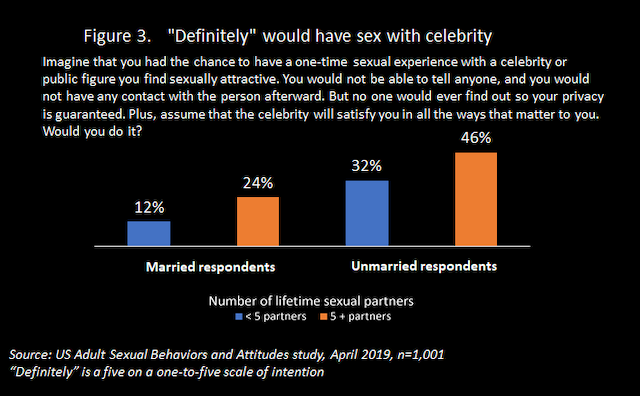 Of course, this hypothetical example is not a cause of infidelity. Instead, as my survey results illustrate, infidelity’s roots likely start much earlier in someone’s background and experience.3 But infidelity is also often the fruit of a lifelong approach to mating that involves seeking and practicing short-term mating encounters that encourage sexual variety at all stages and into marriage.

1. In April 2019, a survey of U.S. Adult Sexual Behaviors and Attitudes was fielded to a nationally representative sample of adults ranging in age from 18 to 74. The outgoing sample was balanced by sex, age cohort, and U.S. Census region. Sample sourced from and data collection provided by Dynata, a global leader in first-party data and data services. The respondents were weighted back to the outgoing sample parameters for sex, age, and region. Data were validated for internal consistency and compared for population representation to US Census data and GSS data for income, rates of marriage, and childbearing. The project was conceived, designed, executed, and paid for entirely by Dr. James McQuivey.

2. Men are more likely to prefer short-term mating behaviors than women, including a preference for more sexual partners over time. See, “Are men really more oriented toward short-term mating than women? A critical review of theory and research,” Psychology, Evolution and Gender, 3 no. 3 (2001).

3. Research into adolescent sexual behavior shows that household composition, such as whether someone was raised by two biological parents, contributes to attitudes toward and experiences with sexual experimentation, correlating with having multiple sexual partners into early adulthood. The data from the present study, though not reported here, support these findings. See, “Ten years of longitudinal research on U.S. adolescent sexual behavior,” Developmental Review, 28, no. 2 (2008).