The Rise of Cohabitation

In the year 2000, scholars Suzanne M. Bianchi and Lynne M. Casper argued that by some measures, the late twentieth-century revolutions in the American family had slowed. There has been a recent “quieting of changes in the family, or at least of the pace of change,” they wrote:

However, they continued, "Whether the [1990s] slowing, and in some cases cessation, of change in family living arrangements is a temporary lull or part of a new, more sustained equilibrium will only be revealed in the first decades of the 21st century."

Fourteen years after they wrote those words, it seems fair to say that the 1990s slowing of family change was just a temporary lull. The percent of births to unmarried women resumed its multi-decade increase in the 2000s, and the percent of adults that are married resumed its multi-decade fall. Family life has also continued to change on another less widely cited measure: cohabitation.

As the below chart shows, the prevalence of cohabitation has greatly increased among all age groups since 1987. Approximately two-thirds of marriages were preceded by cohabitation between 2005 and 2009, up from one-third of marriages in the late 1970s. (As that figure implies, most Americans' first union is cohabitation rather than marriage.) 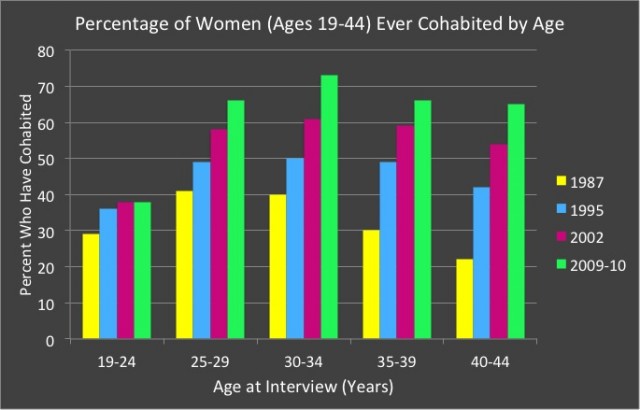 In a recent analysis Jonathan Vespa found that "approximately 1 in 10 young adult women born between 1958 and 1962 cohabited serially [between ages 16 and 28], compared with 1 in 4 women born between 1978 and 1982. Across the period between these two cohorts, the share of two-time cohabitors doubled, from 7% to 16% of all young adult women, and that of three-time or more cohabitors quadrupled, from 2% to 9%." Serial cohabitation became negatively associated with cohabitors' intention to marry over that period. While the risk of divorce associated with cohabitation has faded for couples who have only lived with each other and who did so only after getting engaged, for serial cohabitors who later marry, the divorce risk remains.

Although we know for certain that cohabiting relationships are less stable than marriages, and thus a less optimal setting for raising children, it's hard to generalize about cohabitation because it signifies different things for different couples. For some, it still is a mere stepping stone to marriage; for others, it's an arrangement driven more by convenience or financial necessity than by commitment.

A related problem is that cohabitation has multiple meanings not only at the societal level but also within relationships. That is, some cohabiting partners aren't on the same page about what their living arrangement signifies. Cohabiting women tend to be more committed to their partners than cohabiting men, for instance. Relational uncertainty is widespread.

Finally, the very advantages of cohabitation can prolong less committed and less happy relationships that otherwise would have come to an end sooner with less heartache and fewer complications. Cohabitation might be here to stay, but like most new family trends, it's not without its downsides.

Is Cohabitation Still Linked to Greater Odds of Divorce?

Technoference: How Technology Can Hurt Relationships