Reeves, the policy director for the Center on Children and Families at the Brookings Institution, wrote that feminism and economic change have “dealt fatal blows to the traditional model of marriage” where “Husbands bring home the bacon. Wives cook it.” He went on to describe a new model of marriage, which he calls the high-investment parenting (HIP) marriage model—where both wives and husbands tackle family life in an egalitarian spirit, “recasting family responsibilities, with couples sharing the roles of both child-raiser and money-maker”—as the dominant model of married family life for the twenty-first century.

While it is certainly true that the 1950s-style “Leave It to Beaver” model of family life is dead and gone, Reeves’ article obscures the extent to which the cast of modern American family life remains gendered—at least for most married couples with children—in ways that often come closer to mimicking the division of labor of Claire and Phil Dunphy on “Modern Family” than the egalitarian model advanced by Reeves. Over the course of the show, Claire has moved from being a stay-at-home mom to being a working mom, even as Phil has maintained a consistent presence in the labor force, and both parents have consistently demonstrated a commitment to being HIP—that is, highly invested parents.

The cast of modern American family life remains gendered, at least for most married couples with children.

Though a large minority of couples are following an egalitarian model, for the majority of married families with children, family life is organized along neo-traditional lines, and has been since the 1990s, when the gender revolution stalled out in married families. It’s new in the sense that today’s married dads do a lot more child care and housework than dads of the 1950s, and that most married moms are working in the paid labor force. But it’s “traditional” in the sense that most husbands take the lead when it comes to breadwinning, and most wives take the lead when it comes to childrearing.

Take child care and housework. Research done by Jeffrey Dew and me indicates that the ratio of maternal to paternal primary child care among married parents fell from 5.6 in 1975 to 2.2 in 1990s and has since stayed there (see below). This means that about 69 percent of child care among married couples is done by married mothers today, a figure that parallels the most recent estimate of the division of child care offered by the Pew Research Center. Pew estimates that married mothers also do about 68 percent of the housework. 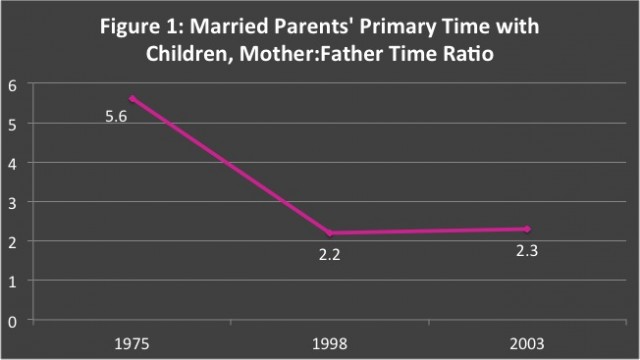 Take work hours. Similar patterns can be found when it comes to the amount of time that married fathers and mothers devote to the paid labor force. Married fathers are responsible for about 65 percent of their households’ hours in the paid labor force (39 hours a week), while wives perform 35 percent (21 hours a week), according to the Pew Research Center.

Take money. Not surprisingly, married fathers also take the lead when it comes to breadwinning. Specifically, in 2012, married fathers earned about 69 percent of their families’ income, according to data from the American Community Survey. What’s more, this pattern has been fairly constant since the Great Recession. 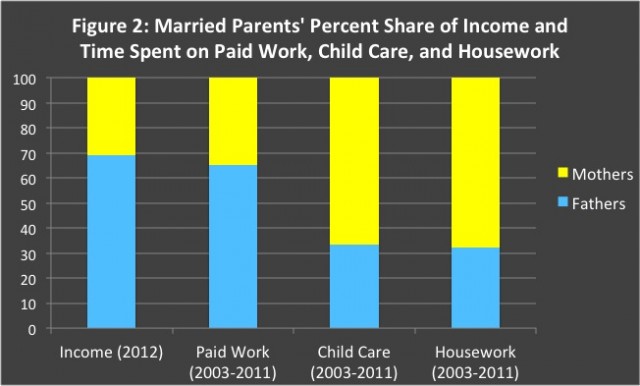 Source for time spent on paid work, child care, and housework: Kim Parker and Wendy Wang, “Modern Parenthood: Roles of Moms and Dads Converge as They Balance Work and Family,” using 2003-2011 data from the American Time Use Survey. Source for income: the American Community Survey, 2012.

To what extent are these patterns the result of an outmoded and unfair array of work-family policies, business practices, and gender norms that trap contemporary women into more traditional work and family arrangements against their will? Sociologist Pamela Stone, for instance, has argued that “women are not opting out but are instead being pushed out of the workplace.” This is certainly true for some married mothers.

But most married mothers in the U.S. tilt in a more neo-traditional than egalitarian direction when it comes to their preferences. In fact, more than three quarters of married mothers do not wish to work full-time: 53 percent prefer part-time work and 23 percent prefer to be stay-at-home mothers. (This stands in marked contrast to married fathers: 75 percent of them think working full-time is ideal and an additional 13 percent prefer part-time work, according to Pew data.) Here, I suspect that ordinary married mothers’ desire to invest time, affection, and supervision in their children’s lives outweighs their desire to lean in at work, at least while their children are young.

Public policies related to work and family should be geared toward maximizing flexibility, rather than locking in approaches serving full-time, dual-income families.

These trends underline three social facts that commentators and policymakers need to keep in mind about contemporary family life:

1)  Many married mothers and fathers are structuring their modern families around a moderately neo-traditional approach to family life, because that’s the way of life they aspire to.

2)  There is more heterogeneity in work-family arrangements and ideals among today’s married families than in the past: significant minorities of couples organize their lives along traditional lines (he works, she stays at home) or along egalitarian lines (both work full-time and share child care and housework in fairly equal ways).

3)  Family-minded women are likely to put a premium on finding men with decent employment prospects. That’s because having a husband with a good job will enable them to realize any aspirations they might have of scaling back, or leaving the labor force for a time, when children come along.

It’s for these reasons that public policies and cultural norms related to work and family should be geared toward maximizing flexibility, rather than locking in approaches geared to serving full-time, dual-income families, and toward renewing the employment opportunities of poor and working-class men who have become less “marriageable” in recent years. Efforts like this will put a wider range of family options—including the “Modern Family” model that is now popular—within reach of ordinary Americans.