The Most Dangerous Places to Be a Mom or Kid

Pregnancy, childbirth, and motherhood are never easy, even in the world's wealthiest countries. But for millions of women, pregnancy and birth are still life-threatening, and the dangers to themselves and their children don't end after delivery. A combination of armed conflicts, natural disasters, and poverty prevent many mothers and children from receiving the health care they need and cause millions of preventable deaths each year. The State of the World's Mothers report from Save the Children documents these facts in heartbreaking detail:

The ten worst places for mothers and children, in a ranking based on their "health, educational, economic, and political status," are Somalia, the Democratic Republic of the Congo, Niger, Mali, Guinea-Bissau, the Central African Republic, Sierra Leone, Nigeria, Chad, and the Côte d’Ivoire. The ten best places: Finland, Norway, Sweden, Iceland, Netherlands, Denmark, Spain, Germany, Australia, and Belgium. Both lists show a remarkable degree of geographic concentration, as the map below shows. 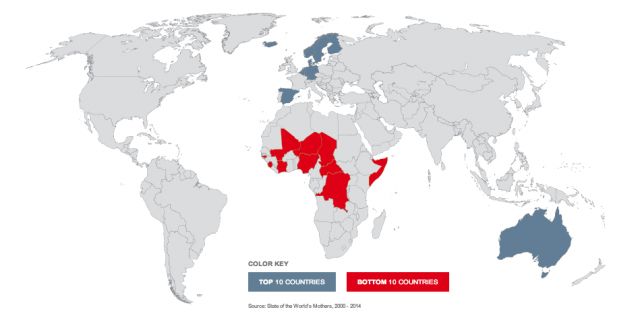 Despite the grim statistics and the complex situations that underlie them, progress remains possible. As the report documents, although Nepal had ranked among the world's ten worst nations to be a mother just nine years ago, it has since devoted significant resources to improving access to health care, causing under-5 mortality to drop by 71 percent and maternal mortality to drop by 78 percent since 1990. Here's hoping that other struggling countries are able to replicate its success.

To Honor Women, Don't Erase Us