The Marriage Gap in Europe

It's common knowledge that fewer people are getting married these days.

Among parents, roughly eight out of 10 who are married when their child is born will still be together when their child completes secondary education. If the parents don’t marry, the odds of staying together while bringing up a child plummet to three out of 10. That’s a pretty big gap.

Although there are some differences between married and unmarried parents who live as a couple—a fact that was highlighted in the Marriage Foundation's latest study on teen self-esteem—children generally do equally well if their parents stay together, married or not. The big difference is whether couples stay together or not.

And marriage clarifies commitment like nothing else. By agreeing to marry, couples establish clarity about their plan to stay together for life, which removes any lingering ambiguity and puts them on the same page. Couples can do this without getting married. But few manage to do it successfully.

One of the striking findings in a 2015 Marriage Foundation report was how the trend away from marriage in the UK has barely affected those who are better off. Among parents with children under five, 87 percent of those earning over £40k annually (i.e., 40,000 pounds, which is equivalent to about $50,000 in the U.S.) were married. Contrast this with the 24 percent of those in the lowest income group who were married.

In other words, at a time when society and our opinion formers are telling us that marriage isn’t that important, the better-off are still marrying in droves.

We decided to have a look at how this phenomenon varies across Europe.

Professor Spencer James of Brigham Young University in the U.S. and I started with a couple of big European surveys, including the European Social Survey, which gives us a pretty good idea of the marriage gap between rich and poor across 20 countries. We analyzed data from the seventh round of this survey (for 2014), looking at the proportion of all parents with dependent children, and all adults, who were married.

Our detailed findings are available in our new report published by Marriage Foundation. But here is brief summary of what we found: 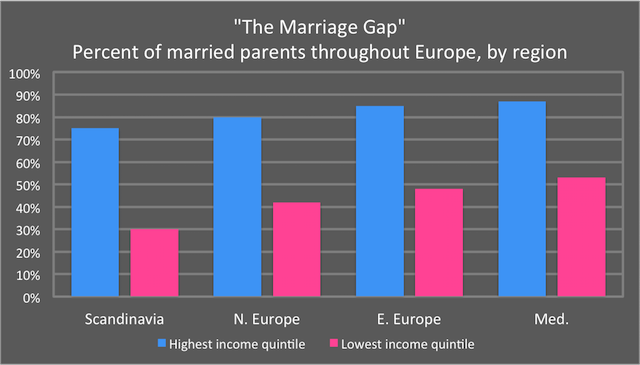 This is striking stuff.

Wherever we look throughout Europe, the rich are still getting married in droves.

Politicians and those who influence us—almost all of whom fit into the ‘rich’ category of the top fifth by income—keep telling us that marriage isn‘t all that important. The tragedy is that the poor—those who need stability more than anyone because they don’t have the cushion of money—are listening.

Our analysis shows that the trend away from marriage, and the stability that marriage brings, is closely linked to lower income. Policy solutions aimed at reducing family breakdown must, therefore, focus on increasing stability, commitment, and marriage among lower-income groups.