The Link Between Family Background and Academic Success

by Anna Egalite, @annaegalite
Back to Blog

July 2, 1966, marked the quiet release of the Equality of Educational Opportunity report by Johns Hopkins University sociologist, James S. Coleman. Although President Lyndon B. Johnson’s Department of Heath, Education, and Welfare drew little attention to “the Coleman Report,” it turned out to be one of the most impactful education reports of the past 50 years.

Coleman’s analysis concluded that the primary predictor of student academic success was not disparities in access to school resources such as textbooks, laboratories, library facilities, or even curriculum quality; rather, it was a child’s home environment. This surprising finding didn’t fit with the dominant civil rights argument of the day, prompting some to question the validity of the report’s findings. Since the report’s release, others have questioned the ability of Coleman’s research method to answer causal questions. Nonetheless, empirical support for Coleman’s conclusions has actually grown stronger over the years.

Take a glance, for instance, at recent descriptive statistics on child well-being collected by the U.S. Census Bureau. They reveal an interesting pattern in student suspension rates that corresponds with family structure. As the figure below shows, the lowest percentage of students experiencing a suspension at any stage in their educational career is observed among 12-to 17- year olds living with two married parents (5.3 percent), whereas the highest percentage is observed for children living with a guardian (13.8 percent). Participation in extracurricular clubs, on the other hand, trends in the opposite direction. (Note: Living with two parents, married or unmarried, or one parent refers to children who point to biological, step, or adoptive parents.) 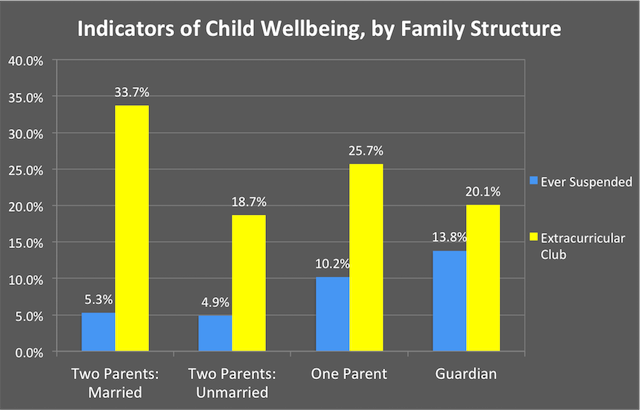 The most convincing evidence, however, stems from the growth of “quasi-experimental” research that is far better equipped to trace a causal pathway between home environment and key academic outcomes. Briefly, quasi-experimental research relies on a comparison group that is as similar as possible to the treatment group, almost as if the two groups had been generated by chance. This is the strongest research design, after a “gold standard” experiment.

The percentage of births to unmarried mothers has risen rapidly in the United States in recent years, reflecting dramatic changes in the diversity of family structure. While unmarried mothers are not necessarily single, the instability of cohabiting partnerships is much higher than for married couples, which can negatively influence children’s educational success. Indeed, the share of married-parent families predicts high school graduation and suspension rates in Florida, as a recent IFS study found. Further, quasi-experimental estimates of the impact of a father’s absence suggest there are negative effects on children’s social and emotional well-being in addition to their educational attainment.

Parental education is regularly identified as the single strongest predictor of a child’s academic success. Whether this is a direct or indirect effect can be challenging for researchers to tease apart; nonetheless, the relationship between parental education and academic achievement, the number of years spent in formal education, and even later life outcomes is strong.

Highly educated parents are more likely to read to their children, enhancing early literacy skills and building foundational content knowledge from an early age. When interacting with their children, educated parents pose more questions, employ a more complex vocabulary, and give fewer orders. The benefits of these formative interactions accumulate, such that by age three, children whose parents receive public assistance have heard approximately one-third fewer words than their counterparts in higher-income families in which the parents are likely to have higher levels of educational attainment.

Family income is also known to have an impact on children’s academic outcomes. An increase in family income received through one of the largest federal antipoverty programs has been shown to raise the achievement levels of children raised in low-income families. The largest impacts are observed for children from more disadvantaged backgrounds, for younger children, and for boys.

Family income can have an indirect effect on children’s outcomes by influencing the neighborhood in which a family resides. Two particularly convincing recent research papers point to the impact of neighborhood on student achievement. First, Chetty and Hendren show how moving to a better neighborhood as a child can influence college attendance, teenage birth rates, and income in adulthood. Second, a recent working paper by scholars at Northwestern University and the University of Florida examines the impact of in utero exposure to environmental toxicants. Given that disadvantaged parents are more likely to live near sources of pollution, any impacts of their address on their children’s health or cognitive outcomes could perpetuate a cycle of disadvantage. The results suggest this is exactly what happens. Children born to a mother who lives within two miles of a hazardous waste site are 7.4 percentage points more likely to repeat a grade, are 6.6 percentage points more likely to be suspended from school, and have lower test scores. Those living within just one mile of a hazardous waste site are also 10 percentage points more likely to have a cognitive disability.

The consequences of growing up poor can be dire, with serious implications for the prospects of intergenerational mobility. This stems from all manner of family background characteristics, including family structure, parental education, family income, and residential neighborhood to name a few. Social policy must target these influences if it is to expand opportunity for all.

Anna Egalite is an Assistant Professor in the Department of Educational Leadership, Policy, and Human Development at North Carolina State University.