The Good and Bad News About Family Life in America

There is both good news and bad news to report about marriage and family life in America. The good news, as Figure 1 indicates, is: divorce is down dramatically since 1980. This means the fabled statistic—that one-in-two marriages end in divorce—is no longer true. What’s more, nonmarital childbearing has also reversed course since the Great Recession. 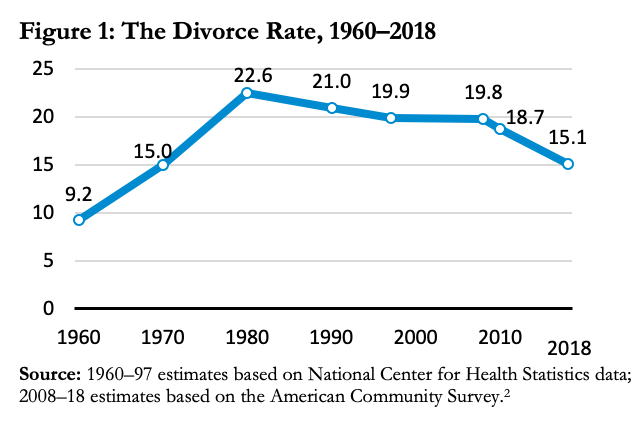 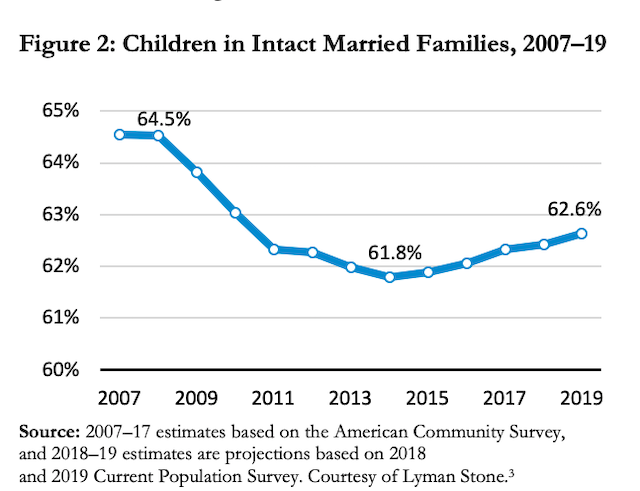 Note also that this uptick in children being raised by their own married parents has been strongest for black children, as we see in Figure 3. That’s the good news. 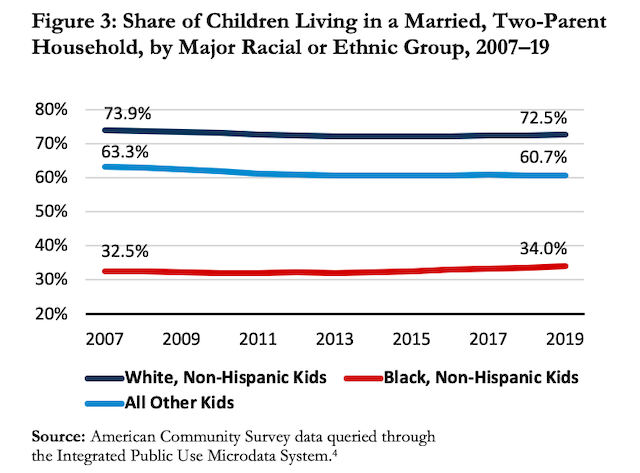 The bad news is that the nation still remains deeply divided when it comes to family structure and stability. Single parenthood is about twice as high for children from families with less education and for black children.1 This form of family inequality leaves many working-class and poor children “doubly disadvantaged”—navigating life with less money and an absent parent.2

The Roots of Family Inequality

This family inequality is rooted in shifts in our economy, culture, and public policy.3 We know, for instance, that men without college degrees have seen their spells of unemployment climb in recent years,4 undercutting their marriageability.5 Since the 1960s, American culture has de-emphasized the values and virtues that sustain strong and stable marriages in the name of “expressive individualism.”6 But what is interesting about this well-known cultural trend is that a cultural countercurrent has quietly emerged in recent years among elite Americans. While America’s educated elite overwhelmingly reject a renewed marriage-centered ethos in public, they embrace a marriage-centered ethos for themselves and their children in private, thereby affording their families a significant cultural advantage when it comes to forging a strong and stable family life.7 Unfortunately, this marriage-minded ethos has not yet caught on as much in less-advantaged communities.8

Likewise, declines in religious and secular civic engagement have been concentrated among working-class and poor Americans, robbing these families of the social support they need to thrive and endure.9 Finally, means-tested programs from the federal government often penalize marriage among lower-income families.10

Why Family Structure and Stability Matter

The family divide in America matters because the American Dream is in much better shape when marriage anchors the lives of children — and the communities they grow up in. My use of the term “marriage” here is deliberate. No family arrangement besides marriage affords children as much stability as does this institution, as Figure 4 shows us. 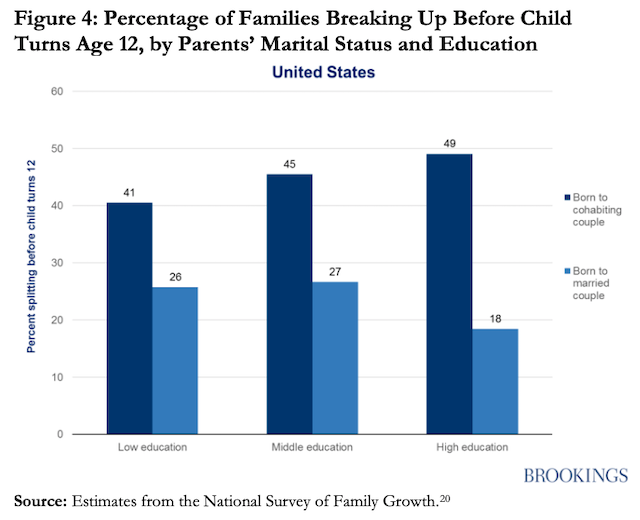 It is impossible to summarize here the voluminous literature on family and child well-being but suffice it to say that children are much more likely to thrive in school11 and steer clear of poverty when their parents are married.12 Figure 5 is telling on this score. 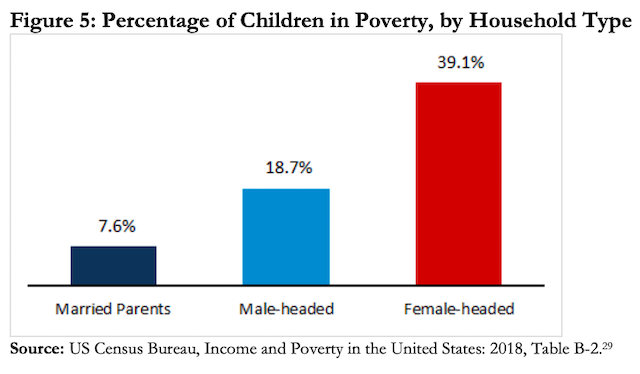 Family structure also matters for communities. Scholarship by Harvard economist Raj Chetty and his colleagues indicates that neighborhoods with more two-parent families are significantly more likely to foster rags-to-riches mobility for poor children.13 In all these ways, the research tells us that the American Dream is much stronger in communities with more married families—communities like the ones the chairman and vice-chair hail from.

What’s to Be Done

Unfortunately, many communities today don’t have the family stability found in Alpine, Utah or Old Town Alexandria, Virginia. So, what should we do to renew marriage in communities where families are more fragile?

1. End the Marriage Penalty in Means-Tested Programs. Currently, marriage penalties in programs such as Medicaid, SNAP, and the EITC can reach as high as 32% of total household income.14 This is unconscionable. Congress should eliminate marriage penalties by doubling income thresholds for programs serving low-income married families with children under age 6.

2. Strengthen Career and Technical Education. Most young adults will not get a 4-year college degree, yet our education system devotes far too little attention to this group. We need to scale up career and technical education15 to boost the earnings, self-confidence, and marital prospects of young men and women who are not on the college track.16 One promising provision already under consideration in Congress is Workforce Pell — which would make Pell Grants available to shorter, job-focused community college programs that lead to industry-recognized credentials.17

3. Subsidize Lower-Income Work. To strengthen the economic foundations of poor and working-class family life and to increase the returns of work for less-educated men and women, the federal government should subsidize lower-income work.18 A wage subsidy would reinforce the value of work and also send a powerful signal to working-class families that the nation stands with them. One approach would set the value of the subsidy relative to a “target wage” of $15 per hour and “would close half the gap between the market wage and the target” wage.19 Unlike the EITC, this wage subsidy would be added to worker’s paychecks, providing them with an ongoing, paycheck-to-paycheck boost to their family budget.

4. Expand the Child Tax Credit. To help families cover the expenses of raising young children and reduce the financial stresses that can cause marital instability, Congress should expand the child tax credit to $3,000 per child and extend it to payroll tax liabilities or provide families with a fully refundable credit.20 The credit should be paid out on a monthly basis to give families month-to-month support in addressing the financial challenges of raising a family today.21 To limit the expense, this expansion should be limited to children under age 6.

5. Launch Civic Efforts to Strengthen Marriage. I would like to see a campaign organized around what Brookings Institution scholars Ron Haskins and Isabel Sawhill have called the “success sequence,” in which young adults are encouraged to pursue education, work, marriage, and parenthood in that order.22 Ninety-seven percent of young adults today who have followed this sequence are not poor.23 A campaign organized around this sequence could meet with the same success as the recent national campaign to prevent teen pregnancy.24

Measures like these are necessary to bridge the divide in family structure and stability across the U.S., a divide I think we can all agree is unacceptable and un-American.

8. Wang and Wilcox, “State of Contradiction.”; and Wilcox, Wolfinger, and Stokes, “One Nation, Divided.”

9. Robert D. Putnam, Our Kids: The American Dream in Crisis (New York: Simon and Schuster, 2015); and Wilcox, Wolfinger, and Stokes, “One Nation, Divided.”

18. Oren Cass, The Once and Future Worker; and Sawhill, The Forgotten Americans.