The Education-Fertility Link May Be Weakening

Historically, highly educated women have been less likely to marry and have children than their less educated peers. Female employment has likewise been associated with lower fertility at the national level. Yet most, if not all, of these links have weakened or reversed in recent decades in the United States.

Unlike in the mid-twentieth century, for instance, college-educated American women of today are just as likely as other women to get married. Further, as researcher Uta Brehm has explained at OpenPop.org, “the intuitive and seemingly self-evident negative association between [OECD] countries’ female labor force participation rates and total fertility rates has gone into reverse since the mid-1980s.” Since that time, the correlation between fertility and women’s employment in 17 OECD countries has actually been positive.

The association between education and childbearing among American women is also evolving. Drawing on a recent study they coauthored, economists Moshe Hazan and Hosny Zoabi document at VoxEU.org that the best-educated American women—those with more than 16 years of schooling—experienced a significantly higher fertility rate in 2001-2011 than in 1980, and in the last decade even had a higher fertility rate than women with slightly less education. It remains the case that women without a high school diploma have the very highest fertility rates; however, they account for a shrinking share of all mothers, and the overall spread has narrowed since 1980. Both changes are evident in the below figure that the scholars constructed. 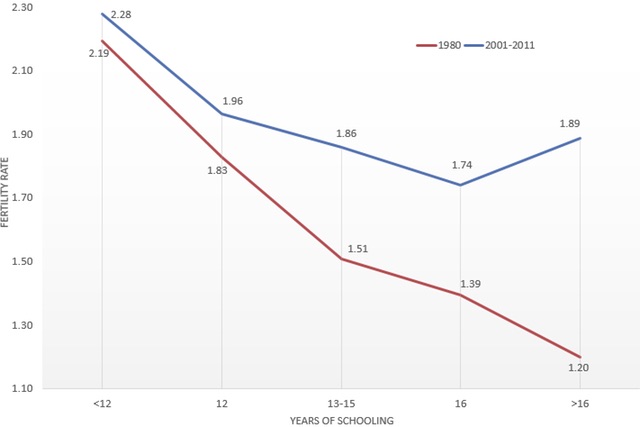 Hazan and Zoabi argue that one primary factor behind this change is growing income inequality, which “created both a group of women who can afford to buy services that help them raise their children and run their homes, and a group who is willing to supply these services cheaply.” Their comparison of wages in the daycare industry in each state to the wages of women at different education levels reveals that “childcare has become relatively more expensive for women with less than a college degree but relatively cheaper for women with a college or an advanced degree.” (Details about their statistical analysis and the other potential explanations they tested are available in their Vox summary and full-length article.)

Gretchen Livingston at the Pew Research Center has reported similar findings about education and fertility using a slightly different measure. In May, she showed that over the past two decades, women ages 40 to 44 with master’s degrees or more education have grown less likely to be childless and more likely to have at least two children. She, too, found that the overall educational “gap” in fertility has narrowed somewhat in recent years.

How will these trends develop in years to come? As with so many other features of family life, it will surely depend in part on the economy. The 2008 recession caused fertility rates to decline among most demographic groups, but less educated (and thus more economically vulnerable) women were hit much harder than college graduates. As the economy continues to recover, some believe that these less educated women may have more children to compensate for the births they put off during the recession and slow recovery. On the other hand, the longer-term increase in income inequality could mean that having (more) children remains out of their reach whether the national economy is shrinking or growing. The ongoing rise in mothers’ education levels is good news for kids, but an economy and culture hostile to marriage and parenthood serve everyone poorly.