The Benefits of Marriage for Homeownership

by Tobias Peter
Back to Blog

In the American ethos, owning a home is viewed as a stepping-stone to the American Dream. However, due to rising house prices over the last several decades, this dream has become further out of reach for many Americans, particularly lower-income households. Yet a new analysis by the AEI Housing Center reveals that one group outperforms all others when it comes to achieving homeownership: married couples. 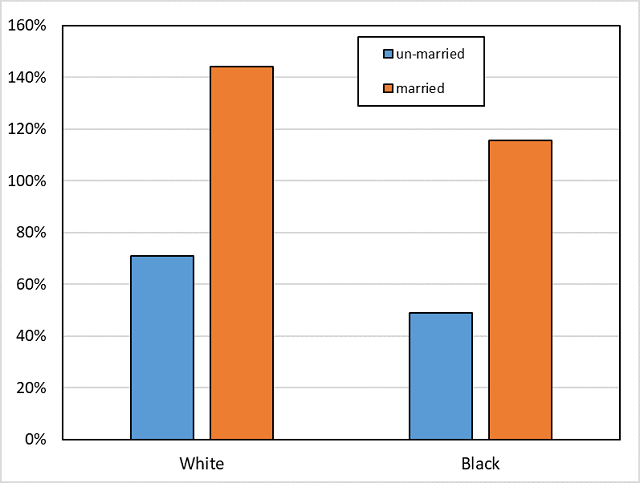 Unsurprisingly, the same data show that as income rises, so does the rate of homeownership. However, what is less well known is just how much marriage is correlated with higher rates of homeownership, regardless of income level. Across the entire income spectrum, there is, on average, a 20-percentage-points boost in homeownership rates for White married households (compared to White non-married households) when comparing those of similar income level and age. When owning a home, income is certainly not the whole story. For example, a married White household that makes the area median income has the same rate of homeownership as an unmarried White household that makes three times as much. 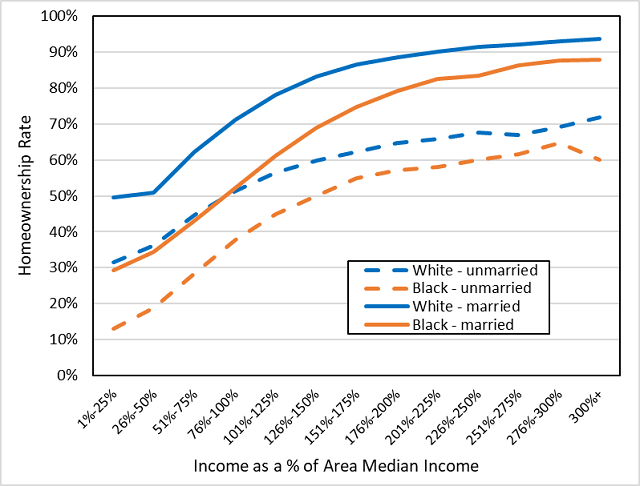 For Black households, the differences in homeownership based on marriage are of the same magnitude (19 percentage points, on average), albeit at lower homeownership levels.1 These lower levels are likely a legacy of past racism, some lingering racial bias, and lower overall levels of socio-economic status. This has left many Black Americans at a large income and wealth disadvantage relative to most Whites. Interestingly, the homeownership gap between higher-earning Black and White married households is also much lower than the overall Black-White homeownership gap.2

Marriage acts as a backstop against a distressed home sale because the presence of a potential second wage earner gives households an additional buffer to weather economic, family, and health setbacks. Being able to weather life’s trials and tribulations is the key to generational wealth building. If a homeowner does not have the financial staying power, there is little option but to make a forced sale or default, which will tank one’s credit score. This ensures higher borrowing costs in the future and the loss of all accumulated equity and the whole down payment. According to research by Amir Kermani and Francis Wong, the prevalence of distressed home sales in minority communities are almost entirely responsible for the racial gap in home sales returns.

To understand how economic downturns affect US households’ ability to maintain homeownership, the AEI Housing Center tracked the performance of millions of loans originated just before the Great Financial Crisis stress event.3 Following each stress event, we found that the presence of a second borrower (a proxy for marriage) on the mortgage significantly mitigated the risk of defaulting on one’s mortgage.

Crucially, the benefits apply across the board. Following both stress events, borrowers with high or low credit scores, high or low down payments, and high or low shares of their income committed to mortgage payments (known as the debt-to-income ratio) all experienced lower levels of default when two borrowers were on the mortgage.

Table 1 compares the default rates for one vs. two borrowers during both stress events for borrowers with the lowest levels of down payment and a relatively high debt-to-income ratio.4

The benefits of marriage for homeownership do not just involve the buying and maintaining of homes. For first-time homeowners, marital status is connected with the single most important driver of property value: location. The pooling of assets opens up the amount of neighborhoods that married households can consider when buying, giving them a leg up to buy in more in-demand neighborhoods. Our analysis of over 2 million purchase loans in 2019 shows that home purchases by two-adult borrowers tended to be in neighborhoods of higher socio-economic status (SES), with access to good schools, jobs, amenities, and neighbors with a lower propensity to default themselves.

These higher-SES areas often have less volatile housing markets, which protects the buyer from being “underwater” during a housing down-cycle. Since married couples tend to purchase in neighborhoods with, on average, 10-point higher credit scores—a key component of SES—they experience compounded gains from buying in these areas relative to lower-SES neighborhoods that experience greater fluctuations in home prices and, therefore, more defaults.

For those raising alarms about the lack of pathways to homeownership and wealth building for those of lower socio-economic levels today, educating young people about the benefits of marriage ought to be a key piece of the puzzle. This research thus extends the “Success Sequence”—get at least a high school education, work full time, and marry before having children—as the path for helping young adults not just avoid poverty, but succeed in their own American Dream of owning their own home.

Tobias Peter is the Assistant Director of the AEI Housing Center.

2. Research by the Urban Institute finds that “if black households were married at the same rate as white households, the black-white homeownership gap across MSAs would decrease by 27 percent, or 8.1 percentage points, once other factors are controlled for.”

3. In particular, we track performance of “plain vanilla” (primary owner-occupied, 30-year fixed rate, fully amortizing, fully documented) loans (this excludes exotic loan products such as negative amortizing or low-doc/no-doc loans) that were originated in 2006-2007 through December 2019. A loan is considered to have defaulted if (1) it ever experienced a delinquency of 180 days or more on or before the end of 2019, or (2) the loan was terminated with less than full repayment of the outstanding loan balance. We bin mortgages with similar credit scores, down payments, and debt-to-income ratios.

4. AEI Housing Center will soon publish a complete analysis of defaults during the Great Financial Crisis and the COVID-19 pandemic at all levels of FICO, CLTV, and DTI bins.