Growing up in a family with a history of substance abuse, mental illness, or incarceration places kids at higher risk of childhood depression, anxiety, and conduct disorders. And for a disproportionate number of kids, these risks come on top of those associated with their family structure. That is, compared to children who live with their married birth parents, children living with divorced or never-married mothers, or with a birth parent and a stepparent, are more likely to come from families with histories of drug or alcohol problems, mental illness, or criminal conduct. The presence or absence of such histories of family pathology may help explain why some young people show longer-term ill effects of family disruption, whereas others do not.

In the 2011-2012 National Survey of Children’s Health, 21 percent of children cared for by a divorced or separated mother had lived with someone—usually a parent or sibling—who “had a problem with alcohol or drugs.” This was five times higher than the rate for children cared for by married birth parents, which was 4 percent. Fifteen percent of kids with a divorced or separated mother had lived with someone “who was mentally ill or suicidal, or severely depressed for more than a couple of weeks.” This was triple the rate for children in intact families. And 10 percent of children with divorced mothers had “lived with a parent or guardian who served time in jail or prison,” versus 2 percent of kids in intact families.

Young people in stepfamilies had family histories similar to those for kids living with divorced or separated mothers. Twenty percent of stepchildren had lived with a household member with a substance abuse problem; 13 percent lived with a parent, sibling, or guardian with a mental health condition; and 13 percent had had a parent incarcerated. Children living with never-married mothers likewise had more troubled family histories than those in intact families: 13 percent of kids with never-married mothers had a drug or alcohol abuse problem in the family; 10 percent had a household member with a mental health condition; and 10 percent had a parent who served time in jail or prison. These comparisons, illustrated in Figure 1, are adjusted for differences across family types in the average age, sex, and race/ethnicity of the child; family income and poverty status; and the parent’s educational attainment. 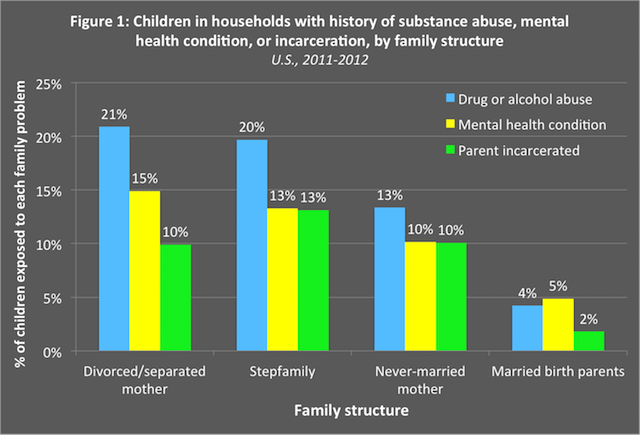 Why are histories of substance abuse, mental illness, and incarceration more common in certain family types? The causal arrow probably goes both ways. Adults who abuse drugs or alcohol, become mentally ill, or engage in criminal behavior are more likely than other adults to have turbulent romantic relationships and to have their marriages break up or never get started. They are also more likely to have unplanned pregnancies and babies outside of marriage. Of course, a parent becoming depressed, drinking heavily, or using drugs may also be a reaction to the stress of domestic conflict and the strain of raising children as a single parent, often in trying financial circumstances.

Whether preexisting condition or response to relationship turmoil, the combination of parental psychopathology and family disruption increases the risk of emotional or conduct disorder in the child beyond that from family disruption alone. In the national survey data, for example, 26 percent of children had an emotional disturbance requiring psychological counseling if they were in a disrupted family and had a family history of mental illness. The rate of disturbance was less than half as great—11 percent—for children in disrupted families where there was no family history of mental disorder. (The “disrupted family” category includes children living with divorced, separated, and never-married mothers; divorced, separated, and never-married fathers; a biological parent and a stepparent; other relatives; and foster parents.)

Among children in intact families, on the other hand, 16 percent had an emotional disturbance requiring counseling if they had a family history of mental disorder, versus only 5 percent if there were no such family history. (See Figure 2.) Using children from intact families with no mental illness history as a baseline, experiencing family disruption alone doubles children’s rates of emotional disturbance (11 percent versus 5 percent), while the combination of family disruption and mental illness history multiplies it by a factor of five (26 percent versus 5 percent). These comparisons are again adjusted for differences across groups in the average age, sex, and race/ethnicity of the child, and for differences in family income, poverty status, and parent education level. 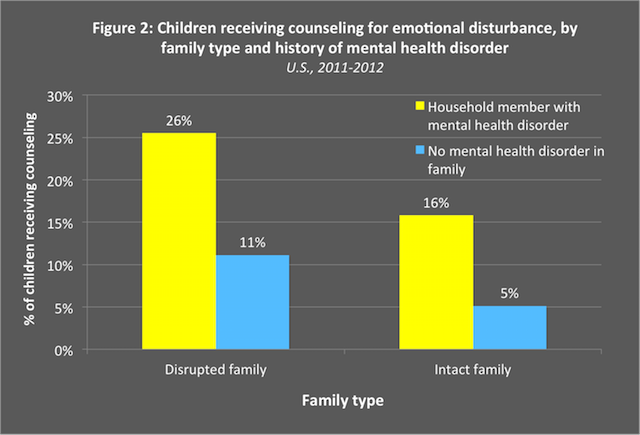 The higher prevalence of histories of mental illness, substance abuse, and incarceration among disrupted families helps account for why certain children are more severely impacted by family disruption in the long run than others. Nearly all kids feel a mixture of anger, sadness, and anxiety when their parents argue and split up, and many show short-term behavioral disturbances as well. But after a period of time, provided their subsequent life circumstances are not too toxic, most are able to adjust and do reasonably well. Significant minorities, however, show longer-term impairments, such as high-school dropout or college non-completion, chronic joblessness, premature sexual involvement and parenthood, and juvenile delinquency or adult criminality. The young persons from disrupted families whose lives go awry usually have other risk factors working against them, such as a mother who did not complete high school herself, or problems in the family like those described above. Moreover, longitudinal studies of divorce have found that when young people show severe disturbances after a family breakup, there were often behavior or achievement problems that preceded the marital disruption.

The increased risk of disorder that young people face from the combination of family disruption and parental psychopathology (even when other family risk factors, such as poverty status, are controlled for) probably has both environmental and genetic roots. When parents have a history of drug or alcohol abuse, mental illness, or violent or dishonest behavior, their children may be burdened not only by a less than ideal home environment, but also by a genetic legacy that may incline them toward emotional instability or learning challenges. Future studies that measure and control for genetic as well as family environment factors will help us to understand better how families shape the health and behavior of the young people who grow up in them.