As single-parent and stepparent families have become more common in the U.S., is it the case that children from these families have fewer problems than they used to? Many scholars believed that as alternative family types became more accepted and less stigmatized, children from non-intact families would be less apt to exhibit learning, emotional, and behavior problems in school and elsewhere. Moreover, as government programs aimed at ameliorating the economic consequences of family instability (i.e., Food Stamps,1 Medicaid, WIC,2 public housing, and child support enforcement) have grown, so has the expectation that greater public support for vulnerable families would improve the life chances of children in single-parent families.

More recently, educators have been under pressure from political leaders and social justice activists to make sure that their instructional and disciplinary practices do not contribute to unequal educational outcomes. In particular, advocates have criticized schools for holding back lagging students from grade advancement and suspending or expelling students for serious misbehavior. Both interventions have tended to fall disproportionately upon children from non-intact families. These shifts in school discipline and pedagogy may have also minimized the consequences of family instability for children from single-parent and stepparent families in schools. In sum, it is possible that changes in the culture, public policy, and schooling have combined to make family instability less important for children’s school performance.

On the other hand, hailing from an intact, married family may now be a greater advantage for children than ever. In a world marked by more electronic distractions, greater social atomization, and a more anemic community life, having the benefit of two, loving parents may be more valuable than it was even a quarter-century ago for our nation’s children. Students’ performance and conduct in school are affected by the intellectual stimulation, emotional support, guidance, and discipline they receive at home. They are more likely to get the attention, affection, and direction they need to thrive in school when they come from a family headed by their own married parents. This is especially true in a day and age when fathers in intact homes are more involved with their kids than ever before. As we have shown in earlier IFS research briefs, and as many other researchers have found, students from intact, married-couple families still tend to do better in school than those from disrupted or unmarried families.

The question we take up here is: Does family structure matter even more for children’s performance in our nation’s schools than it used to?

Although the frequency of marriage has declined, couples who do marry and have children tend to be relatively older, more educated, and more religious. These characteristics raise the chances that the marriage will endure. As a consequence, divorces have diminished in frequency since 1980. In fact, today more single-parent families are the result of non-marriage rather than separation or divorce. These developments improve the relative life chances of children in married-couple families.

In this new Institute for Family Studies research brief, we examine data from two federal surveys conducted 23 years apart to determine whether and how the links between students’ family living arrangements and indicators of student performance and adjustment have changed over the last quarter century. These surveys include: the 1996 and 2019 National Household Education Surveys (NHES), nationwide surveys of parents whose children who were enrolled in elementary and secondary schools across the country.3 The former covered some 17,535 students, and the latter 15,990 students in grades kindergarten through 12.4

We analyzed data from these surveys with respect to the frequency of the following teacher and school interventions for students from non-traditional versus married, biological families:

We then looked at how often these interventions occurred overall and in both types of families. In addition to looking at raw frequencies of occurrence, we adjusted the comparisons for related factors like parent education level, race and ethnicity, as well as for the ages and sex of the students in each group.

Fewer Students Are Being Held Back or Suspended

Our first notable finding is that the overall frequency of each of the interventions listed above declined significantly over the quarter century between 1996 and 2019. 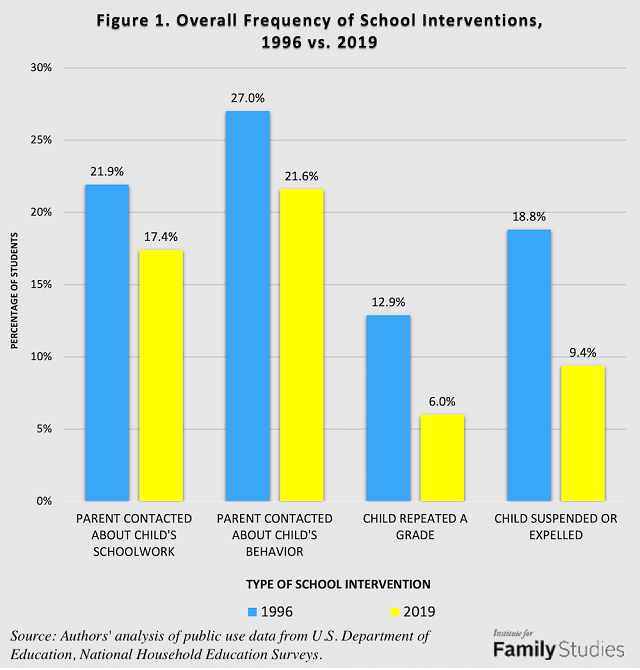 Note: Proportion of U.S. students whose parents had been contacted due to learning or behavior
problems, who repeated a grade, and who were ever suspended or expelled: 1996 vs. 2019.

The Growth in Non-intact Families Has Slowed

The proportion of U.S. students living in single-parent, stepparent, and other non-intact families increased modestly between the 1996 and 2019 surveys—from 41% in 1996 to 43.5% in 2019. While single-parent families grew dramatically in number during the latter half of the 20th Century, the growth has slowed during the first two decades of the 21st Century. And it may now be levelling off and even reversing.

Fewer Children from Non-intact Families Held Back or Suspended

Their Relative Risk of Being Held Back or Suspended Has Increased 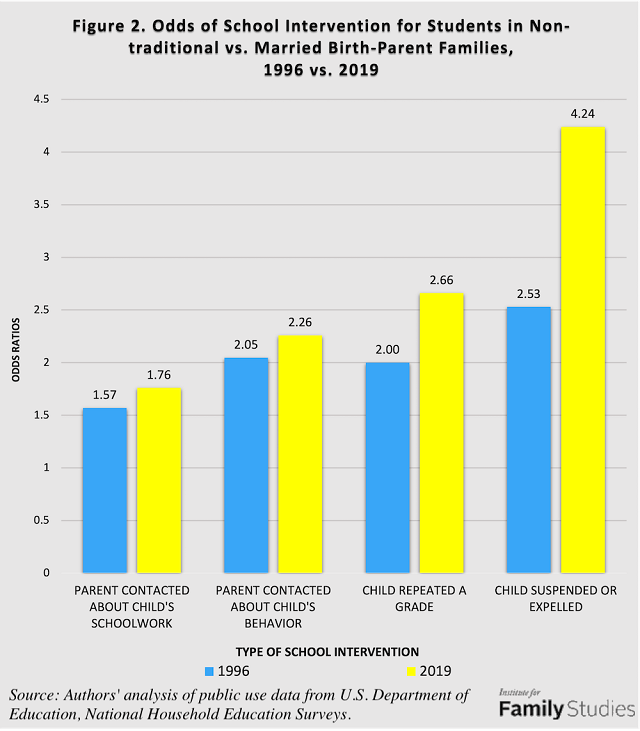 Note: Odds of students in single-parent families vs. married birth-parent families having parents
contacted due to schoolwork or behavior problems, repeating a grade, and being suspended or
expelled: 1996 versus 2019.

Risks Remain Elevated Even After Adjusting for Demographic Characteristics

The greater risks of school intervention faced by students from non-traditional families decline when the odds ratios are adjusted for differences across family types in racial composition and parent education levels, as well as for the ages and sexes of the students in each group. But students from non-intact families continue to have nearly triple the risk of suspension and double the risk of grade repetition as students from intact, biological families.

The increase in relative risk is not always statistically significant. It is only for suspension and parental contact about behavioral problems that the increases were statistically significant. (Note here: Increases significant at 10% level of significance.) But it is striking that the odds ratio increased for all four outcomes in the last quarter-century. Our results are consistent with the theory that marriage matters more than ever for today’s children. 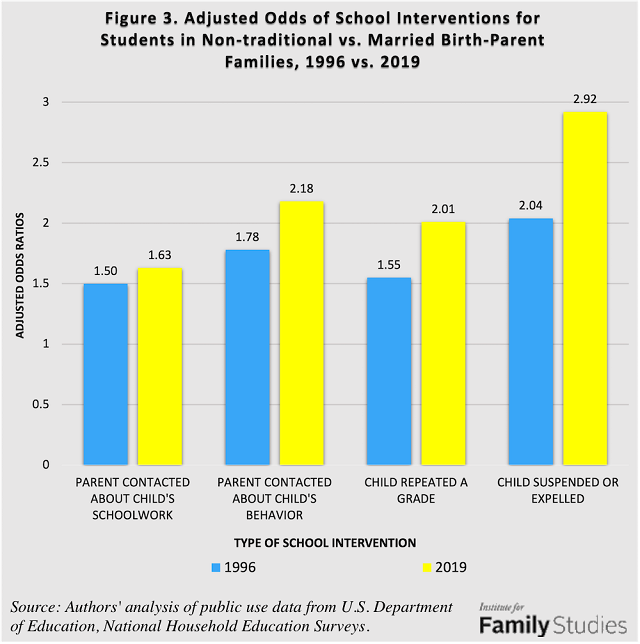 Note: Adjusted odds of students in single-parent families vs. married birth-parent families having
parents contacted due to schoolwork or behavior problems, repeating a grade, and being suspended
or expelled: 1996 versus 2019.

Disciplinary Actions Are Down, But Kids from Single-Parent Families Are Still at Greater Risk

Our analysis of data from two large-scale national surveys of parents of students in elementary and secondary schools, conducted in 1996 and 2019, leads us to the following conclusions:

These results reaffirm the conclusion that children from stable, married families have a better chance of receiving the guidance and support they need to succeed academically and adapt confidently to the classroom environment than children from disrupted or reconstituted families. This does not mean that children from non-traditional families cannot do well in school. Many do, despite the conflict, turmoil, or curtailed parenting they may experience at home. But the odds of school success are more favorable for those from families headed by married, biological parents. In fact, our research lends additional credence to other research suggesting that family structure matters more than ever for the educational attainment of today’s children. Even though family instability is less stigmatized than it once was, this research brief indicates that the power of being raised by stably married parents is only increasing.

Are we to believe that the declines in school interventions that our analysis documents mean that student learning and behavior have improved dramatically since the 1990s? Though there is reason for skepticism, there is also some cause to believe that positive changes have occurred in the last quarter century. For one thing, there is widespread public belief in the value of educational attainment as necessary for career success and economic advancement. The National Household Education Surveys have repeatedly demonstrated that most American parents today have high—some would say unrealistic—ambitions for their children’s educational attainment.

Furthermore, a larger portion of today’s student body is composed of the children of recent immigrants. As we have documented in previous research briefs, immigrant parents place an even higher value on educational attainment than do native-born U.S. parents. They also tend to be more supportive and less questioning of school procedures and demands. And they are more likely than native parents to reside in married, two-parent families.

On the other hand, the results of NAEP, the nationwide testing program also called “The Nation’s Report Card,” have not shown significant advances in what students know and can do over the last quarter century. Rather, that report card and other evidence suggest that learning difficulties and classroom misconduct continue to occur, but that teachers and school administrators are reacting to them differently. They are coping with classes composed of students at very different levels of achievement and rates of progress in reading, writing, math, and other academic subjects. They are also advancing more students through the grades, even though their tested achievement may not warrant such advancement.

Likewise, they are tolerating misbehavior by individual students that would not have been put up with in the past. At the same time, some teachers and administrators are labeling more students as having learning or emotional disorders and funneling those students into special education programs or classes. They are presenting parents with a rosier picture of how their children are doing in school, at least until the later stages of high school when the realities of low achievement must be faced. Finally, some students are being awarded diplomas who may then attend community college, where they will require remedial classes, or end up dropping out, as many now do.

The difficulties of operating schools during the pandemic have brought greater public awareness about how schools function, along with increased parental dissatisfaction with some of the things that teachers and school administrators are doing. Whether this increased attention will result in meaningful school reforms, including how schools interact with students from non-traditional families, remains to be seen.

But what is apparent from this research brief is that even though the American school climate keeps changing, the advantages of being raised by one’s own married parents have not waned. If anything, having the benefit of two, stably married parents in their corner seems to give students an extra boost when it comes to flourishing in 21st-century schools.

Download a PDF version of the full research brief with appendix tables.

Nicholas Zill is a research psychologist and a senior fellow of the Institute for Family Studies. He directed the National Survey of Children, a longitudinal study that produced widely cited findings on children’s life experiences and adjustment following parental divorce. Brad Wilcox is director of the National Marriage Project at the University of Virginia and The Future of Freedom fellow at the Institute for Family Studies.

4. Results presented here on student suspension or expulsion are based on students in grades six through twelve only, totaling 9,375 students in 1996 and 8,179 in 2019.