Last week, I wrote about Linda Zhao et al.’s findings in a Demography study linking income inequality to increased death rates in communities. Conn Carroll has responded to my article in The Washington Examiner in a commentary titled, “Is inequality killing us? Or is it family breakdown?”

Carroll suggests that the reason Zhao and her coauthors found such a robust association between local income inequality and mortality is that they did not control for marriage. The retreat from marriage in the U.S. has progressed faster in the bottom of the income distribution than at the top, and much research establishes that the married live longer. Ergo, mortality disadvantages that seem related to local income inequality could, in fact, be driven by the decline in marriage.

I am quite happy to bring marriage into the discussion about income inequality and death rates. But it’s wrong to pit nonmarriage against inequality as if they were some kind of either/or, which is what Carroll does when he concludes: "If we want more people to live happier, healthier, and longer lives, we should look to solving our nation’s marriage crisis, not inequality."

Not inequality? Consider that all the arrows shown in this diagram have been backed up by solid research. 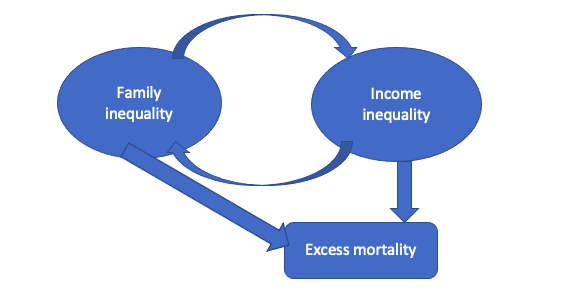 Unmarried families are not equal to married families in terms of income, partly because men stay attached to the labor force better when they have wives (the top curved arrow). Nicholas Eberstadt has shown that the likelihood of being employed has been virtually indistinguishable between married high school dropouts and unmarried men with a college degree for decades (Figure 5.20 in this chapter). This gives married families income advantages.

But how likely is it that men who are high school dropouts will be married? Financial stability is a cultural prerequisite to marriage in the United States, and jobs are notoriously unstable at the bottom tiers of the labor market. More importantly in this context, Andrew Cherlin and his coauthors have shown that lower income men are less likely to marry in unequal areas where social comparison leaves them feeling financially unfit for marriage than in more equal areas where their low earnings are more typical (the bottom curved arrow). That means that if we are trying to solve our nation's marriage crisis, tackling inequality can be an effective strategy.

In fact, my own (incomplete) list of ways to tackle income inequality includes some that look like straight-up marriage promotion. To reduce income inquality, we should:

1. Undermine the "capstone" model of marriage by using two ideas that have recently gained traction in our society: mental health problems are widespread, and uncertainty is the new normal. When marriage is a capstone placed at the apex of a successfully constructed adult life, the message is that people need to have their stuff together in order to marry. While it would be seriously misguided to advise people whose lives are out of control to bind their future with someone else, it is also harmful to set the marriage bar so high that folks despair of ever reaching it. Instead, we should emphasize that the good life includes working through problems (like mental health issues), and that waiting for stability before marriage is ill-advised for anyone since we live in chaotic times (we don't know what is going to happen in Ukraine, or how the next COVID variant will affect our lives). Once adult life is conceived as a work-in-progress even after marriage, the idea of building a future together—rather than crowning the future two individuals have built with a lovely capstone—will have more appeal.

2. Undermine the marital industrial complex. Some couples delay marriage when they are otherwise ready because they cannot afford the wedding itself. Providing a free church venue with a free wedding cake would be insufficient to motivate a couple that was not sure of their relationship to marry, but it could be an enormous help for couples who would otherwise bow to the cultural imperative to have a big wedding after (if) they could afford it.

3. Build on existing prototypes for successful prison-based relationship education. Like other relationship building initiatives, the track record for prison-based programs is far from perfect. Of the four programs implemented with an experimental design and evaluated by Tasseli McKay and her coauthors, only one had lasting positive effects on relationship quality. The 3-day intervention tested in Indiana provided hotel rooms for the female partners of incarcerated men, and it served meals to partners on decorated private tables set with tablecloths. Its success testifies to the fact that socioeconomic inequality often includes social exclusion, and that treating people with dignity is crucial. In this case, better relationships are part of a package that includes less recidivism and better labor market attachment.

4. Stop using prison as a warehouse for the mentally ill and chemically dependent. These issues are admittedly difficult—and they do come coupled with both violent and non-violent crime—but a prison record takes more away from the earning power of already disadvantaged citizens.

5. Advocate for eliminating the second prison. After a convicted criminal has paid their debt to society by completing a prison sentence, numerous formal barriers to successful reentry into free society remain. This is the second prison, and we should not continue to punish people after they have paid for their crime according to their sentence.

6. Advance more changes that facilitate graduating from college in four years. Georgia State has been a path-breaker in this area, doing things like designing more first and second year classes to count toward multiple degrees so that students who switch majors can still finish before their eight semesters of financial aid eligibility run out. Georgia State has also used "big-data" to identify at-risk students for summer-before-college programs. College graduates earn more, so our society will be less unequal if more disadvantaged students can make it through.

7. Enable more earning power among the less educated. Richard Reeves advocates doing this through more vocational apprenticeships and strengthening community colleges. If community colleges provided a better education, there would be less of a wage gap between those with "only" an Associate degree and those earning the Bachelor degree. Maryland Governor Larry Hogan also took a step in this direction recently by launching a "first-in-the-nation workforce development initiative to formally eliminate the four-year college degree requirement from thousands of state jobs."

8. Promote learning and re-training throughout the life course. An elite team of 18 researchers noted as early as summer 2020 that "the pandemic has brought a seismic shift in the use of electronics, the internet, and remote learning in ways that could create more openness and responsiveness to the need for ongoing education and training over the life course." By normalizing ongoing education, we can make the differences in credentials among young adults less consequential for lifetime success.