According to a recent article in the New York Times, parents shouldn’t worry about how much time their kids spend using technology because, at least according to some experts, too much screen time is not related to their health and well-being.

If that sounds hard to believe, you’re right to be skeptical. In fact, many of the statements in the article written by Nathaniel Popper were misleading, wrong, or both. Here are six glaring misstatements:

1. The NYT article grossly misrepresents the research consensus on technology use and mental health.

The author makes it sound as if the majority of researchers have concluded that technology use isn’t related to mental health, even though that is not the case. For example, the article failed to mention the many medical journal articles finding substantial links between technology use and mental health. These studies have appeared in JAMA Psychiatry, JAMA Pediatrics, the Lancet eClinical Medicine, and the Lancet Child and Adolescent Health. All four studies use longitudinal designs that can rule out the possibility that mental health issues lead to technology overuse instead of vice versa. It is puzzling that the NYT piece didn’t even mention the best designed-studies from medical journals—even more puzzling since I provided the reporter with a detailed list.

2. The article also misrepresents findings from a recent review of screen time and mental health studies.

The article does mention a recent review of studies on screen time and mental health by Amy Orben, who concluded that the average correlation between social media use and depressive symptoms is between .11 and .17. But it cites Orben’s study as evidence that the link between social media use and mental health are small. There’s just one problem with this argument: These are not small effects.

Consider the CDC’sYouth Risk Survey of U.S. high school students. In that dataset, twice as many heavy users of electronic devices (5+ hours a day) compared to light users (1 hour a day) have attempted suicide (12% vs. 6%).

That certainly doesn’t seem small. Surely, such a substantial difference must be an outlier—it must be much larger than the average effects summarized by Orben. Except it’s actually smaller: the correlation between electronic device use and suicide attempts is .06, less than half of Orben’s estimate for the research literature as a whole.

How can this be? The statistic Orben relies on, linear correlation, can be relatively small even when effects are large. Take the original Salk vaccine trials as an example. In the original vaccine trials, the polio vaccine correlated only .01 with whether children got polio, but unvaccinated children were more than three times more likely to get polio than unvaccinated children. Likewise, the correlation between childhood lead exposure and adult IQ–certainly considered an important effect—is .09, below the lower end of Orben’s estimate for social media and depressive symptoms. 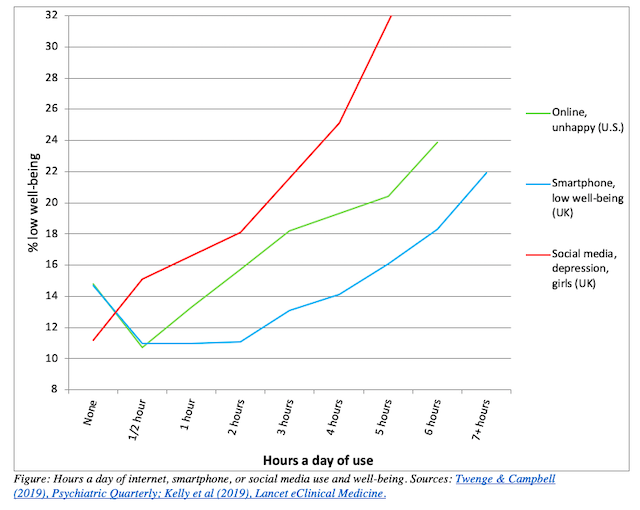 Thus, when the number of people affected is considered, these are not small effects. If we’re going to dismiss the links between technology use and mental health as too small to matter, we should also stop worrying about childhood lead exposure and give up on vaccinating our kids against polio.

3. The NYT article quotes experts who, without plausible evidence, dismiss the possibility that the rise of social media and smartphones might be behind the marked rise in teen depression, self-harm, and suicide in recent years.

For example, in the article, Popper quotes Jeff Hancock of the Stanford Social Media Lab as saying, “Why else might American kids be anxious other than telephones? How about climate change? How about income inequality? How about more student debt?”

The problem with this argument is that none of these factors can explain the increase in teen mental health issues that began in 2012. First, they didn’t happen at the same time. The largest increases in income inequality occurred between 1980 and 2000; income inequality barely budged between 2007 and 2016. Meanwhile, student loan debt has been stable since 2012. Furthermore, the number of Americans worried a fair amount or a great deal about climate change changed little between 2012 (73%) and 2019 (74%), according to Gallup.

In contrast, 2013 was the first year when the majority of Americans owned a smartphone; by 2018, 95% of teens had access to a smartphone, and 45% said they were online “almost constantly.” The time after 2012 is also when social media use moved from being optional to virtually mandatory among teens. 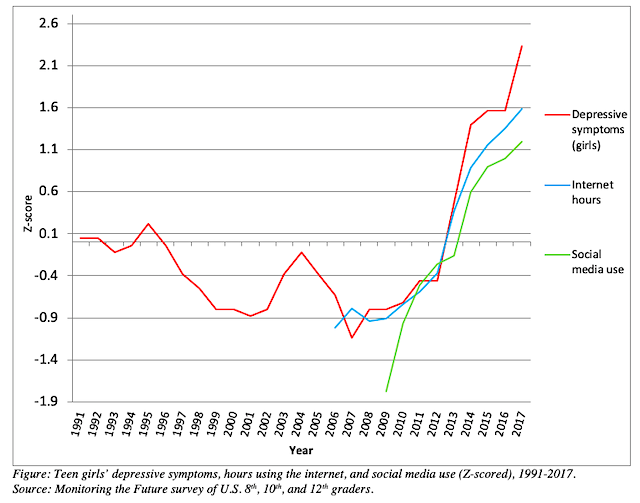 Parents can rest assured that their instincts to protect their kids from too much screen time are not wrong.

Worries about climate change seem somewhat more plausible, but really, how many 12-year-old girls are cutting themselves because the planet is warming? It’s much more likely they are concerned about their self-image, their social status, or their friendships and family relationships—issues that have become more fraught in the age of social media. Those concerns are exponentially more important to the personal mental health of young people than worry about climate change, which might, instead, spur them to feel anger or to participate in activism—not to become depressed or harm themselves.

The increase in teen depression could have occurred even if time spent on technology was not related to depression among individuals. How? Even teens who don’t use technology have been affected by the shift in teen social life from in-person get-togethers to online interactions. Consider a teen who doesn’t use social media and would prefer to go out with her friends. But who will she go out with when everyone else is at home on Instagram?

In addition, social media creates a situation where everyone can feel left out—teens who don’t use social media feel left out, and those who do use it can see in real time what their friends are doing without them. Futhermore, the effects of the rise of smartphones go beyond just time spent online. As younger and younger teens have their own phones, more have unfettered access to information online—including information about self-harm. It may only take a few minutes to find that information, increasing rates of self-harm in a way unconnected to excessive time spent online.

5. Additionally, the article points to Europe as “evidence” that smartphones are not behind the increase in teen depression, when the evidence from European countries shows otherwise.

It claims that “anxiety and suicide rates appear not to have risen in large parts of Europe, where phones have also become more prevalent;” however, the linked study examines adults, not teens. In fact, teen suicide rates have also risen in the UK since 2010, as has self-harm. Canada and Australia show similar trends in youth mental health. In addition, the World Health Organization reports increases in suicide rates around the world, with the largest increases among youth.

6. Finally, the article notes, “Ms. Odgers, Mr. Hancock and Mr. Przybylski [the researchers who claim technology use is not related to well-being] said they had not taken any funding from the tech industry.”

However, Przybylski is employed by the Oxford Internet Institute, which is funded by Facebook, Google, and Microsoft. Until recently, so was Amy Orben, whose research is also cited in the article.

The bigger question is this: Why is the New York Times intent on assuring parents that they shouldn’t worry about their kids’ screen time? This article is not an isolated example; the paper published a similar article with similar misstatements late last year. Yet the paper did not cover the medical journal studies referenced above, or any of the others on the list I provided.

Even more shocking: The research linking technology use to well-being doesn’t suggest that we should eliminate all technology from our kids’ lives, which would be a difficult proposition and thus controversial. Instead, this research merely suggests we should limit technology use, especially social media, to reasonable levels (about 2 hours a day of leisure time, and not in the hour before bedtime).

“Everything in moderation” is hardly a radical idea.

So, why the resistance? I wish I knew. For now, parents can rest assured that their instincts to protect their kids from too much screen time are not wrong. If kids who ate 5 apples a day (vs. 1) were twice as likely to attempt suicide, parents would make extremely sure their kids didn’t eat too many apples. Why should our response to technology time be any different?

Jean M. Twenge, Ph.D., is a professor of psychology at San Diego State University and the author of iGen: Why Today’s Super-Connected Kids Are Growing Up Less Rebellious, More Tolerant, Less Happy – and Completely Unprepared for Adulthood.