Considerable research over the last two decades has been devoted to the relationship between religious participation and health and well-being. Our research on this topic at the Harvard T.H. Chan School of Public Health links religious service attendance to a number of better health outcomes, including longer life, lower incidence of depression, and less suicide. Our work also indicates that religious service attendance is associated with greater marital stability—or more specifically, with a lower likelihood of divorce.1

We are not the first to study the relationship between religious service attendance and the likelihood of divorce. In fact, a number of studies have found similar results: namely, that those who attend religious services are about 30 to 50 percent less likely to divorce than those who do not.2

One of the critiques of this research is the possibility that those who may be contemplating divorce may be more likely to stop attending religious services. In our research, by looking at the timing of changes in religious service attendance, we were able to control for this possibility, and the results persisted: those who attended religious services were 47 percent less likely to subsequently divorce. Our study consisted only of women, but other studies have looked at both men and women, and the results are once again similar. Our study also focused on middle-aged and older women, but again, other studies have examined younger men and women with similar results.3 The effects of religious attendance on divorce seem to be fairly widely applicable.

Why might religious service attendance protect against the likelihood of divorce? More research into the precise mechanisms is still needed, but a number of factors seem like logical possibilities that should be investigated further. 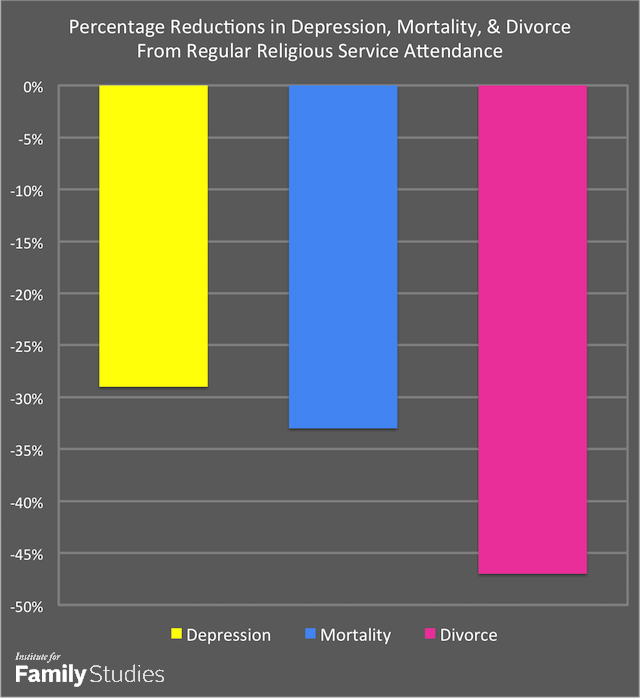 What are the implications of this research? Religion is, of course, not principally about promoting physical health or decreasing the likelihood of divorce, but about communion with God. However, it turns out that the pursuit of this goal also has profound implications for numerous other aspects of life, including health and marriage. Religion might be understood as the pursuit of complete human well-being: physical, mental, social, and spiritual. Religion is about both communion with God and the restoration of all people to their intended state of complete wholeness and well-being. The evidence suggests that it can indeed accomplish both.

The communal aspect of religious attendance does seem to be important. With the various health outcomes, it appears to be religious service attendance—rather than self-assessed spirituality or private practice—that matters the most. Something about the communal religious experience is powerful. Again, in the case of marriage stability, religious communities may provide important teaching about the sacred nature of marriage, extra support for families and children, and a sense of community with shared values. These things don’t necessarily arise with solitary spirituality.

People, of course, do not become religious just for health reasons or to avoid divorce, but for those who already consider themselves religious, service attendance can provide a critical support. Religious practice, whether communally or between spouses, is powerful. Indeed, other research suggests that shared family religious activities and praying together are likewise associated with greater relationship satisfaction and greater levels of trust.6 Shared religious activities like praying together may help couples deal with stress, and allow them to focus on shared beliefs and hopes for the future, and deal constructively with problems in their relationship. Thus, for those who already consider themselves religious, both religious service attendance and joint prayer may be vital resources for strengthening marriage and trust, and for promoting happier, healthier, and fuller lives.

Tyler J. VanderWeele, Ph.D., is Professor of Epidemiology in the Departments of Epidemiology and Biostatistics at the Harvard School of Public Health and a faculty affiliate of the Institute of Quantitative Social Science at Harvard University.

1. Tyler J. VanderWeele, “Religion and health: a synthesis,” in J.R. Peteet, and M.J. Balboni (eds.), Spirituality and Religion within the Culture of Medicine: From Evidence to Practice, (New York: Oxford University Press, 2017). Available at: http://pik.fas.harvard.edu/files/pik/files/chapter.pdf